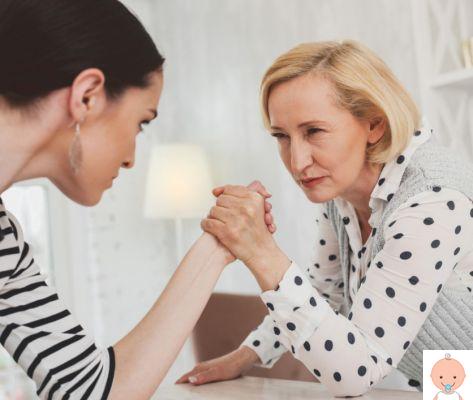 How to handle a mother-in-law

There are those who find themselves as a mother-in-law a loving but discreet "second mother", and who once she becomes a grandmother constitutes a concrete help and also a moral support. But there are also those who are not so lucky: here is a list of useful ideas for dealing with a "difficult" mother-in-law.

Also read: 10 phrases a mother-in-law should never say to a daughter-in-law

Problems with the mother-in-law can begin during pregnancy, or perhaps even earlier, when, close to marriage or cohabitation, one of the leitmotifs of family evenings in the name of discretion becomes the question "When will you make me a nephew?" If you answer glissando, or give some justification such as "At this moment we can't, we work in two, the salaries are what they are, there is a mortgage to pay ..." and she replies promptly "You do it, I raise it" then yes, you have a cat to peel, and a big one too. We might as well put the stakes straight away: "When it is now, help will surely come in handy, but I don't have a child to let someone else raise it." Needless to say, her brazenness will pass completely under the door, while you will be accused of being sour and indelicate. We might as well get used to it right away ...


Yes, because during pregnancy there will be occasions when, simply by bouncing the mother-in-law's attempts to invade your life at 360 degrees, you will earn the title of "Worst Daughter-in-law" and you will lose hundreds of points in the eyes of your partner. If the mother-in-law empties the closet and sets up a baby's room for us when we send him to sleep / eat / why not live directly with her, she is a grandmother who is only guilty of "too much love". If you weakly object that you see no reason to practically give your child up for adoption to another woman, after you have consciously chosen to have him and perhaps even quit your job, you are the personification of perfidy, pathologically jealous of the child you carry in. womb and outrageously unfair. It is therefore useless to dot the i's, to respond badly to the mother-in-law or even worse to unleash anthology quarrels with the partner. Better to take a deep breath and think about two things: 1) from now on and for the rest of your days, she will always be the good one and you the bad 2) that given, no one can ever force you to entrust your child to a person you don't esteem, whom you don't trust and who doesn't seem to have understood the difference between “mom” and “grandmother”.

The highlight of the mother-in-law management it is represented precisely by childbirth. As the finish line approaches his threats become more pressing "Call me now, I want to be present in labor." "I want to be the first to pick him up." "I'll spend the nights: you sleep, I keep (why not breastfeed him, while we're at) MY baby." And if you try to argue that the hospital rules are different, the brilliant argument will come "But I'm the grandmother." What to do? If with our parents it was enough to calmly and firmly clarify that we want to live this moment in our family intimacy, with the mother-in-law it will not work, if not to make her even more determined to do the exact opposite. Don't worry: hospital staff are generally trained to managemother-in-law alarm (I suspect there is a dedicated course during the university period). They will not let anyone in for labor and delivery, and thereafter only during visiting hours. If it is a serious hospital, they will prevent visitors from touching the newborns until after they have disinfected their hands, or from staying in the room with the nursing mother. And you will want with all your heart to stay in the hospital for life.


But sooner or later from the hospital, like it or not, they throw you out, and since you have warned all your relatives and friends not to want anyone on the day of discharge, your mother-in-law will be there, lurking in front of your house probably by night. first. And this is where your transmutation into "Cruella de Mon" will be complete: you will have to do it, for survival. During the puerperium you will always have to disconnect the phone and intercom, because you will not be able to see your mother-in-law at set times "a grandmother does not need an appointment to see her baby".

After a sleepless night, to make sure you stay in peace, you'll have to wall yourself up in the house with closed shutters and a car hidden in the neighbors' garage. The strategy of pretending to be stupid is the only viable one, because no one understands your reasons, those of a woman who has the insane claim to rest after giving birth and build a relationship with the creature she gave birth to. Instead, they are all participants in the drama of another woman, unfairly kept away from HER child twice a month, who is not even allowed to take him for three months on vacation with her in the summer. This is badness.

So here are other tips scattered around the daughters-in-law suffering from the infamous mother-in-law monster:

Driving a car when pregnant ❯