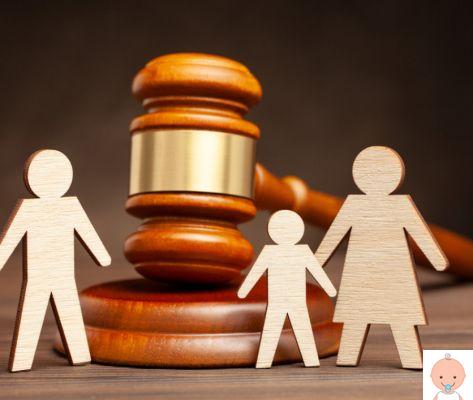 In the country the so-called increase new poor, and according to Caritas data, almost 1 of 2 (46%) is represented by a separated father who is not a nomineethat is, whose children, following the separation, live permanently with their mother. There are 4 million separated or divorced fathers in the country, of these 800.000 live on the poverty line. The 66% about  DON'T fails to support expenses for i basic necessities.

Read also: What are the rights of separated parents over their children and what to do in case of non-respect of access rights?

The main reason for this worrying impoverishment is represented by thechild support allowance, which is often beyond the real economic capacity of man. The Union of Separated Fathers denounces in 94% of separations, the man is required to payment of maintenance checks and, given that only in 30% of cases he is allowed to keep the house, the remainder 70% of men must add to that sum also the expenses for a new home, which should possibly be in the same area where the children live and sufficiently welcoming and spacious to be able to host them on the days in which they are entrusted.

"Unfortunately, the news reports tell us situations of extreme difficulty, with fathers forced to live in cars because they are unable to afford the costs of a house. This, in addition to being intolerable for a civil society, also implies limitations on their parenting. , as it appears evident that they will not be able to keep their children with them, making them sleep in the car, reducing the time they spend together. the lawyer Valentina Ruggiero, expert in family law - With the pandemic and the related economic difficulties, then, the situation has worsened further. Certainly in the Judge's evaluation there is always the primary objective of protecting minors, but it would be desirable to take the lives of parents into due account ".

The associations of separated fathers denounce, in fact, that often the maintenance allowances (which are not deductible from taxes) are well above the real availability of man. For example, with one net salary of 1.400 euros per month, you can get to having to pay between 400 and 700 euros, depending on the number of children. The remaining sum should be enough to cover the costs of food and accommodation for himself, in addition to the small expenses to be incurred when he is in the company of the children (ice cream, rides, cinema, dinners ...).

"I believe it is the duty of judges, lawyers, legislators and society as a whole to become aware of this situation which is becoming truly unsustainable. It is important to allow these men to lead a dignified life, continuing to play the role of father. Let us remember that two-parenting is not only a pillar for the life of minors, but also their right. There are and are many reform projects in this area, and they must be approved more quickly. They should urgently be decided on everything a series of housing reforms to be granted to separated fathers with children. These reforms will give the possibility to create more and more free housing or with minimum token payments within the cities (buildings owned by the municipality in disuse to be restored) which will allow thus facilitating the economic situation of separated parents. For separated fathers, not having to bear expensive rents would meanlive in a civilized society open to the needs of families. This too represents and demonstrates the civilization of a country "concludes the lawyer Ruggiero.

A check of up to 800 euros per month is on the way for separated and divorced parents, intended to guarantee continuity of maintenance. The maneuver was introduced by the Sostegni Decree and by Support Decree Bis and it will accompany other aid for families, workers and businesses. The "divorced separated parents bonus" is a new incentive coming to support families and the country. The Law 21 May 2022, n. 69 of conversion, with modifications, of the Decree-Law 22 March 2022. n. 41 (so-called Sostegni Decree) establishes for 2022, a fund intended to help working parents, separated or divorced, in a situation of work and economic difficulty, through an economic contribution. The fund for separated and divorced parents is equal to 10 million euros for 2022. It can be used through a monthly bonus that can go up to 800 €.

The objective of the incentive is to support separated or divorced people in case they fail to guarantee the continuity of the payment of maintenance checks. The economic difficulty may be due to a reduction, or a suspension or loss of work due to the Covid emergency. The amount will cover in part or in full the value of the maintenance allowance to be paid to their children.

Godfather and godmother: how to choose the right one? ❯

add a comment of Separate fathers: the new poor?