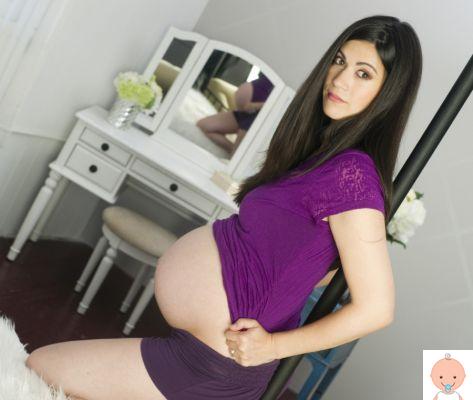 How to shave during pregnancy

Even with the belly we must not give up being beautiful and taking care of ourselves, but how do you do it shave during pregnancy? Given the particular and delicate moment, we need to pay more attention to how to remove unwanted hair and the best way to do it.
Estrogen helps us by blocking the action of testosterone and slowing down hair growth, but at some point we have to shave. We can use all methods, because the substances contained in these products do not cross the skin barrier, however it is good to follow some precautions.
The life of the hair is determined by hormones and those of the armpits, legs, arms and pubis are influenced by the male hormone, testosterone. The hairs are generated by the bulb, and this is contained in the hair follicle. Next to the hair follicle there are the sebaceous glands, from which come the fatty substances that form the layer of water and fat that insulates and protects the skin (HYDROLIPID FILM).

Smoking, alcohol and more. Here are six things to avoid if you are expecting a baby, in the past as it is today

Tips for shaving during pregnancy

practical, fast and painless, it has no contraindications during pregnancy. In fact, it simply passes a blade several times superficially which cuts the hair at the root without needing to use substances that cross the placenta and can harm the fetus. The only precaution: use a lot of delicacy not to create small lesions with the blade. We could use electric razors, but excluding the groin area, which is particularly delicate and prone to redness and irritation.


this method is also quick and painless. Unlike the razor, it eliminates hair by acting on the keratin, the substance that makes up the hair shaft, transforming it into a soft compound and making it possible to remove it with a spatula. The cream is however composed of chemical agents and essential doli, so it is preferable to choose creams based on soothing substances and do a little test before using it, to check if it irritates the skin or causes allergy

directly from the East, a gentle practice that does not create discomfort to veins and capillaries. It is a sugar and fruit based paste that is used cold, spread on the area to be treated with a pleasant massage, has the power to weed out the hair and gives pleasant sensations of well-being. Once the treatment, which lasts from 5/6 weeks, is finished, the skin is cleaned with a mild neutral soap.

What methods to avoid for hair removal during pregnancy

both act by atrophying the hair in depth preventing its regrowth, the laser uses a laser beam while electrocoagulation uses an electric current. Both should be discontinued as soon as she discovers she is pregnant but can be resumed immediately after giving birth

they lighten the color of the hair without removing them, especially in the first trimester of pregnancy they should be avoided because they contain substances that are absorbed by the skin and can easily reach the fetus (ammonia and hydrogen peroxide) and due to the strong odor that these preparations contain which can trigger easily nausea.

painful, but effective, it is not recommended because due to the high temperature of the wax that is applied and due to the violent tearing that is performed, capillaries and varicose veins may appear in pregnancy.

Read also: Beauty in pregnancy, what can and cannot be done

Methods for hair removal in pregnancy to be evaluated

they are electric or battery-powered devices equipped with a row of tweezers that capture the hairs inside small rollers (sometimes it is painful), extirpating them at the root. The result is comparable to that of waxing, and even the shortest and most resistant hair can be removed, and is generally used to remove leg hair. During pregnancy they can be used as long as you do not suffer from swelling and varicose veins because the tear would worsen the situation

also this method, which involves spreading the wax layer slightly heated on clean and dry skin and then tearing it off with the appropriate strips, allows the hair to be eradicated from the root without having to reach high temperatures. It is indicated for small surfaces such as armpits or mustache while it is not recommended for the legs due to the appearance of capillaries

with tweezers the hair is removed from the root, tearing it in the opposite direction to that of growth, generally it is used to refine the eyebrows and to eliminate the hateful mustache

Some tips for hair removal during pregnancy

Before shaving it is advisable to take a shower or a hot bath because hot water softens the skin making it easier to remove hair. After the treatment, however, it is good to cleanse the skin thoroughly and apply a soothing and moisturizing cream to moisturize the irritated skin. Do not apply other creams, deodorants, perfumes and sun creams and avoid swimming in the sea or swimming pool at least immediately to avoid rashes and redness. To slow down hair growth, it may be effective to rub the skin with a horsehair glove, usually after a shower.

Before, all women were asked to shave near birth, but today only those who undergo a caesarean section are asked to shave. The ideal is to have a hair removal at a beautician so you will be comfortable and relaxed, and then wait at least a month after giving birth before repeating the hair removal.

add a comment of Shaving with the belly: all the methods