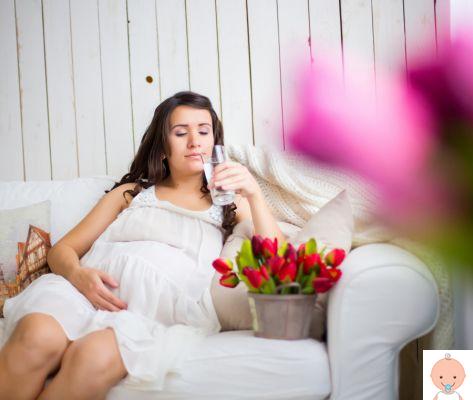 Why so much salivation in pregnancy?

One of the obnoxious and quite annoying ailments that can take over in pregnancy is hypersalivation, a production so high that sometimes it is not even possible to avoid dripping. This condition is known by the medical term of sialorrhea gravidarum, and I would like to reassure you that it is very common and that it does not originate from a pathology.


So let's see what are the reasons why this condition arises. In reality the main reason is only one: land hormonal fluctuations. In particular one of them, the gonadotropina, reduces the ability to swallow which, associated with the hyperproduction of saliva causes drooling.

What are the typical symptoms that indicate physiological drooling?

Typically, sialorrhea occurs in association with first trimester nausea, in the morning or in the evening, or at the end of pregnancy when hormonal fluctuations are greater. Generally between the fourth and the sixth month saliva production should stabilize (as well as hormones) and limit the disturbance. Another peculiar feature of drooling is that saliva can have a typical taste: bitter and metallic. Unfortunately, continuous swallowing, caused by the accumulation of saliva, induces an introduction of air into the stomach and sometimes worsens nausea or causes other gastro-intestinal problems such as abdominal pain, bloating and constipation. In some cases even l'alitosi (the so-called bad breath), can be referred to this type of disorder.

Are there any therapies or measures that can make the drooling go away?

Since, as I said before, the origin of the disorder is not a real pathology but rather a transient condition we tend to avoid prescribing drugs, also because the therapies have numerous side effects. However, when the quantity of saliva produced is such as to create serious discomfort, an attempt is made to control the symptoms with some mainly homeopathic / phytotherapeutic therapies.

The most widespread is the use of pilocarpinum, a herb that aims to stimulate the salivary glands and therefore regulate their functionality. Two other widely used products are the soluble mercury and veratrum album. However, I recommend that all these remedies must be taken after consulting the gynecologist or midwife who follows you during pregnancy.

In addition to real therapies, there are some precautions to be adopted in everyday life that can help alleviate the problem. Always keep a salty snack in your bag e when you feel that the salivary production is increasing, nibble a little bit of it, this will help to dispose of the saliva by limiting the overload of air that is ingested without food.

Other remedies, although I recommend them as a last resort since they are quite annoying, to combat excessive saliva production can be: suck on a lemon or ice cube. I would like to conclude with a piece of advice that does not concern sialorrhea itself, but is useful for combating the symptoms associated with sialorrhea. Always carry a bottle of water or fruit juice with you. The water will serve to counteract dehydration and the fruit juice will stimulate the salivary glands to limit the production of saliva to the minimum necessary for the ingestion of the juice.

It is important that you also bring cocoa butter or a moisturizing lip stick with you. There Continued salivation often causes dry lips which if neglected can lead to cuts and bleeding. Sialorrhea is objectively an annoying and embarrassing problem. Talking about it with the specialist who follows you during pregnancy can help you not to feel embarrassed and not isolate yourself, as well as obviously looking for a solution therapy.