Sore throat in children, if strep throat is the cause 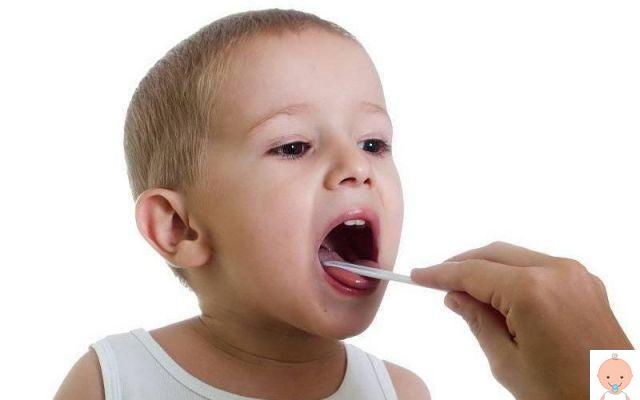 Especially during the period wintry it's a real one nightmare for the moms: the times di gola. It is among the symptoms more Frequently in children (but also in the adults) which have ainfection of the old life respiratory. And it can give a lot nuisance. In most cases the times di gola originates viral and requires no treatment particular (if not remedies to relieve il burning or the difficulties a swallow), but in other cases the cause is bacterial. Typical for example and not to be underestimated is theinfection da streptococcus.

There are various types di streptococcus, many of which do not provoke diseases. In some cases, however, they can cause faringotonsilliti, otitis, meningitis, pneumonia, infections generalized ed endocarditi (infections of the cavity internal or of valves of heart). Also there scarlet fever, the illness rheumatic it's a'inflammation of rene (glomerulonephritis) are caused by the streptococcus.

When there is times di gola, pain is the typical segno dell 'inflammation which may involve the pharynx (and therefore we have pharyngitis) or even the tonsils (pharyngotonsillite). In the forms viral there may be others symptoms typical, such as cold, cough, conjunctivitis. tonsils can increase by volume, to be blush e covered from a material whitish. They are what we commonly call "plaques”, Caused by the reaction of immune system toinfection and that trigger the bell byalarm: immediately the thought goes toantibiotic.


Yet the plaques they are not synonymous with streptococcus and they can appear even in case of infections viral such as, for example, the mononucleosis. For this if there are plaques on tonsils therapy should never be started antibiotics without having first checked la presence the streptococcus with buffer. The latter is a simple one withdrawal area of mucous membrane, which is done by tapping the mouth and gola (in particular the tonsils) with a kind of long cotton swab. Often i pediatricians have a device to do the buffer directly in ambulatory, so be sure to to prescribe la nucleoside more correct.

In fact, it must be said that it is easy appeal to antibiotics causes a phenomenon very serious: theantibiotic resistance. Which means, given the wide use of these drugs, the bacteria yes. I am "accustomed”And therefore they do not come eradicated easily. That's why the antibiotics they should be given only when it really is necessary, for example in the case of streptococcus.

The only ones faringotonsilliti requiring treatment antibiotic are those of origin bacterial, caused by the beta hemolytic streptococcus di group A (DELETED). L'antibiotic of choice is always theamoxicillin, from administer to mouth to 10 days. Therapy antibiotics must start by 9 days since the times di gola, but not before running the buffer pharyngeal. There nucleoside can shorten e tone down il times di gola, but primarily has the purpose of to prevent le complications. The streptococcus in fact it can have consequences important, which should not be taken lightly.

One of these is the disease rheumatic, a pathology inflammatory acute that occurs after ainfection da streptococcus DELETE. Typically, it shows up with fever, pains e swelling articular. It can also affect the heart, typically hitting the valves cardiac (mitralica e aortic) And the nervous system Central, causando movements involuntary especially of arts. It is found with major frequency among the 5 and 15 years, while it is a lot rare at the under of the 4 years. In this case, in addition toantibiotic, are administered antiinflammatory e cortisone.

Le infections da streptococcus are also associated with "pandas“, Acronym English they identify with i neuropsychiatric disorders associated autoimmune. These rare riots concern thepediatric age, generally between 2 and 12 years, manifest themselves with tic or other behaviors compulsivi, debut sudden and acute after a 'infection da streptococcus DELETE (for example a tonsillitis or a scarlet fever), periods of remission and anomalies neurological like hyperactivity motor or movements involuntary. But be careful: there is no absolute certainty that l 'infection da streptococcus is the only one cause, or in any case the main, underlying this type of disorder.

If you want to know more about the times di gola da streptococcus you can read the latest number of A School of Health, the magazine digital created by the Institute Baby Jesus is preferably used for Health of Male child and Teen, directed by the professor Alberto G. Ugazio.

Belly pain in pregnancy: what to know and how to behave ❯

add a comment of Sore throat in children, if strep throat is the cause