Spontaneous abortion: why it happens and how to behave 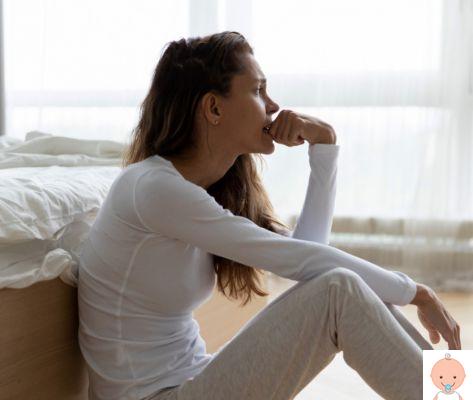 One of the biggest concerns in the first three months of pregnancy is that of the risk of miscarriage. Many women I meet on my first visit want information about it, let's try to answer the main questions.

What is a miscarriage?

The abortion is defined stillbirth of a fetus before the age at which it could survive if it were born (currently around 24 weeks). It happens in approx one third of pregnancies and if very early the woman may not notice it and interpret the abortion as a normal menstruation.

Causes of a miscarriage

Le causes, except for infections, they are mostly unknown. The risk seems to be linked to the presence in the fetus of a DNA with such alterations that it cannot survive.

During the time I worked in the hospital, I often found myself meeting women admitted to day hospital for surgery. The weight they carried inside, their tears moved me too. The question that I have often found myself facing is "why, why me?". Unfortunately, you don't know what to answer, and I've always limited myself to wiping away the tears and comforting them before the surgery.

Read also: Symptoms and causes of a miscarriage

Spontaneous abortion, how to understand it?

In the early months of pregnancy, miscarriage can manifest itself as light bleeding and bright red blood spotting accompanied by mild abdominal cramps. In other cases, abortion does not give great symptoms and is highlighted during the ultrasound.

Is it possible to avoid it and how to do it?

In case it is not too early it usually gives some hints, for example of blood loss or during the follow-up ultrasound an area of ​​detachment of the placenta is highlighted. At this point we try to avoid arriving at abortion. The gynecologist prescribes the rest in bed and pregnancy at risk, in some cases even drug therapy. It is important in this case to avoid as much effort as possible that could increase the losses or the detachment area. A quiet life in which you don't lift weights or exercise intensively can help, even if it doesn't ensure 100% pregnancy success.

In some cases, in agreement with the women, I tried everything from Bach flowers to homeopathy and actually the pregnancy lasted beyond the term of survival of the baby, born premature, but still surviving. I always feel like advising in this case not to give up, even if there is a serious threat of abortion, it is useful to contact any professional you may deem useful.

What happens in the event of a miscarriage?

If the abortion material (the fetus and the placenta is thus defined) is stored in the uterus and not expelled from the body, or if the week is advanced, we proceed to curettage, that is, the remaining material is removed by means of a sort of spoon in order to allow the uterus to return to the way it was before pregnancy.
If the abortion should happen more than once, the gynecologist will prescribe a series of tests that aim to find the reason. They include specific blood tests (also done on the male partner), ultrasounds and other instrumental tests depending on the clinical evaluation.

When to get pregnant after a miscarriage?

How long should I wait after a miscarriage before trying to get pregnant? Personally, more than on pre-established times, I would evaluate the single situation, on the basis of both the physical condition and, above all, on the psychological one.
I would like to underline that the recurring thought of many women about abortion is that they are not suitable to host a child, to raise one, to have something wrong. As a professional I realized that as I encountered new cases of this kind, I increasingly collided with an infinity guilt and a desire for infinite motherhood.

The first months are certainly the most difficult, in which you have to let go of the baby who is no longer there. In some cases I have used massage and relaxation to help mourn. In other cases, however, I felt the pain was so strong that I could not intervene alone, therefore recommending the support of a specialist psychologist.

The more the moment of abortion moves away, the more time passes, the more I try to focus on the couples' desire to have a new child, on their experience as a woman and as a mother, in order to better enjoy the new experience and allow the new child not to be the "substitute" of the previous one.

Unfortunately abortion is a mourning event very frequent, and undoubtedly leaves a mark in every family. What I recommend is to talk about it with every trusted person and not to be ashamed. You can discover people and professionals ready to help us with any means available.

Audio Video Spontaneous abortion: why it happens and how to behave
Miscarriage, what are the most common forms ❯

add a comment of Spontaneous abortion: why it happens and how to behave