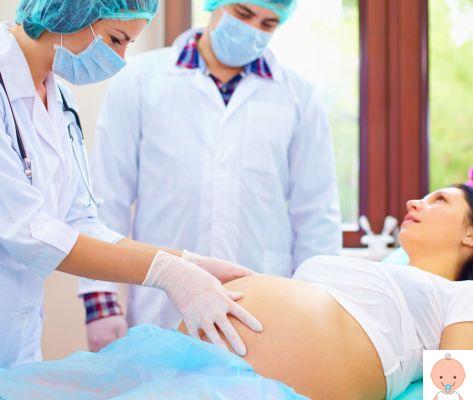 From the We forum we learn the story of a future mother who will undergo a non-invasive cesarean to deliver her baby. But what does the "non-invasive caesarean" actually consist of? The "Stark Method" is a "surgical technique that allows to minimize the trauma of the operation for the organism of the pregnant woman".

It is therefore one variant of the normal caesarean section, which is also referred to as "small caesarean section" or "sweet caesarean section". At the base of the Stark method there is the idea of ​​"limiting the cutting of fabrics" in the mother. In practice, the surgeon performs a cut about 2 centimeters just above the pubis. And then "a large part of the opening of the abdomen and uterus" is entrusted "to the blunt action of the surgeon's fingers". The tissues are therefore less damaged and fewer stitches are needed to close them. Usually a silk thread is used for the stitches.

The traditional caesarean includes theincision of the skin and the various layers of the abdominal wall up to the uterus. Then all the incisions are stitched up. With the Stark Method, however, only the skin and the wall of the uterus are incised. To get to the uterus, the surgeon "works his way" by moving the muscle bands rather than cutting them. The non-invasive cesarean lasts about half an hour, half the time compared to a normal cesarean. And the post-operative recovery is faster.

This technique was devised by Michael Stark, an Israeli gynecologist surgeon. Initially it was designed to be used in environments with scarce health resources and was later perfected and introduced also in hospitals that operate under normal conditions. To do it you need one more experience on the part of the surgeon. Never benefits for the pregnant woman they really seem a lot: less pain for the woman in labor; less tissue damage e faster and easier healing; faster post-operative recovery; faster resumption of intestinal activity and nutrition; reduced operating times. Has anyone tried it?

The scar should be less invasive as the cut is closed with silk stitches to be removed within a few days. The peritoneum and abdominal muscles are not stitched up because they will heal autonomously.

Honey for babies, because it shouldn't be given until 12 months ❯

add a comment of Stark method, the sweet caesarean section