Stories: I contracted toxoplasmosis during pregnancy 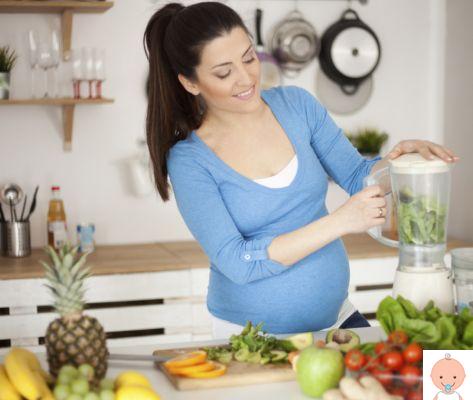 Catching toxoplasmosis generally does not cause any health problems, but if it is contracted during gestation, it often has a fatal outcome or leaves a very serious aftermath to the newborn; I am among those mothers who had the misfortune of contracting it during pregnancy, but luckily we had an angel above us, who gave birth to my healthy baby. A story to give hope to other mothers.

When I was waiting for my Helena Sofia, mine second child, I worked in restaurant and since I was quite well and everything was proceeding peacefully, apart from a few pressure changes, I decided to continue as long as the belly would have allowed.
As for the first pregnancy I followed all the necessary scruples and precautions, strictly avoiding eating undercooked foods, salads or fruit salads outside the home without being sure that they had been scrupulously washed, stuffed and anything else considered dangerous for the contagion of toxoplasmosis, the protozoan of Toxoplasma gondii which lives in mammals and birds, especially in the intestines of these animals, where it carries out its cycle of reproduction.

So many precautions and so many attentions that you are not, however, sufficient. I worked in the dining room, as a waitress and my duties also included the preparation of land appetizers or dishes consisting of various cold cuts and cheeses, so I had to handle the sausages, clean them, slice them and arrange them on the plates to be served, the procedure was so simple and habitual that I did it with my bare hands also because I could not do a continuous put on and take off the gloves to handle the sausages, after all it was enough that I didn't eat them, I wasn't forbidden to touch them!
And instead I got screwed. Yes, because Mr. Protozoan decided to make fun of me and although I avoided all risky foods, he decided to come and see me anyway!

Of course it happens during the day to wrinkle my eyes, at least it happens often to me, especially when I work and I have a little pencil in my eye, which often makes me tear and annoys me, forcing me to crease them. Well, I later found out that Mr. Toxoplasma gondii protozoan it also enters our body through the mucous membranes and by scratching my eyes after cutting those blessed meats I combined the crime.


I remember that it was August, I had done the normal analyzes of the time and among these was also the toxo test.My my gynecologist was on vacation and I, busy with the commitments and daily care of my first child who was just over two years old , I had absolutely not paid attention to those numbers.
So after a week I take the tests to my gynecologist. I was in the 19th week and the exams were therefore 2 weeks earlier.

As soon as the gynecologist saw the results she blanched and asked me if I had had any symptoms, if I had been ill, if I had had a sore throat, but I honestly had not felt any of this. So she explains the situation to me and there a nightmare begins. Most absolute terror and panic. I had often read about the danger of this infection, especially if caught during the first and second trimester but as it always happens, I never thought it could happen to me.

The advice of the gynecologist was one: repeat the exams to see how old the antbodies were and what week the infection was and proceed with a therapeutic abortion, because the baby or girl, in her opinion, would have been born with devastating problems or perhaps would not not even reached the end of the pregnancy by dying earlier.
I, besides being desperate, was hesitant, I didn't want to terminate the pregnancy and I wanted to try to know for sure if that child really had such serious damage as to force me to terminate the pregnancy and even in that case I don't know if I would have interrupted it ..


So the gynecologist referred me to a infectious diseases center for pregnancy about 300 km away where I meet not a doctor but an angel, who after having done all the exams in the day in a day hospital regime makes me begin the therapy with the medicines prescribed by the protocol.
After starting therapy with the spiramycin, an antibiotic tablet that I took 3 times a day, it was time for the amniocentesis, to find out if the infection had passed from the placenta and therefore had infected the baby but it was all useless, because I did it at the 21st week and for the time did not allow to obtain a reliable result and therefore a false positive or false negative. Basically the amniocentesis only served to tell me with certainty that there was a baby in the belly!

After the amniocentesis the gynecologist asked me if the intention to carry on the pregnancy was always the same, since we could not even know if the infection had passed or not, but now my choice was that, I would have continued and I would have had faith. Needless to say, I had no illusions or false hopes, every day I was convinced of the fact that the pregnancy could be interrupted at any moment and that that little girl could have been born with very serious problems, especially in the eyes and head, with intracranial calcifications, problems with the retina, blindness, hydrocephalus. Nightmares.
I dreamed of the silhouette of a little girl whose face I could not see, she cried, cried, nightmares every day, many prayers. And trust in the doctors who followed me.

The path was not easy. I often went for exams and visits to the infectious specialist in the distant hospital, with whom I agreed on the new therapy. Urine and blood tests every two days, an ultrasound every 5 days to see if there were any malformations. After the spiramycin therapy, it was time for more stronger therapies, two courses of chemotherapy and sulfonamides, dangerous and very strong drugs that are used in extreme cases, which could hurt me and the child and for this reason I did samplings and tests every two days, to constantly monitor the values, which did not undergo too many variations and too many changes.

After those cycles again my dear, affectionate spiramycin who accompanied me until delivery!
Meanwhile, from the ultrasounds we always had images that gave me hope and joy, the child grew regularly and at each ultrasound the gynecooga scrupulously searched for each organ, checked its development, monitored that everything was regular even if it repeated to me that in toxoplasmosis sometimes the infection at birth is not visible but the damage and problems can develop later.
So we would have had to wait for the baby to be born to submit her to the follow-ups and all the necessary exams.

During pregnancy I had taken it altogether 24 kilograms, most of it was swelling due to heavy therapies, which I tried to expel by drinking at least 3 liters of water a day, which is very difficult for me as I usually drink quite little.

The 3 February of the 2005, 4 days earlier than the gynecologist's calculations, my baby girl was born at 17,42 pm. Gorgeous.
Immediately after birth, they took samples from the umbilical cord, the placenta and the two of us, to see the levels of the antibodies and to see if she had contracted the infection or had developed my antibodies.
The result of the studies on the umbilical cord was positive and the placenta negative, very ambiguous. So after 5 days they re-examined the child and the follow-up visits began: audiological screening, eye examination with fundus study, ultrasound of the head in search of iontracranial calcifications, swabs and various screening.

All negative.
At eleven days of life, my little girl faces the first trip of 300 km to go to the angel who gave me birth healthy, and in the day hospital, all the visits start again. First the samples, then all the visits, from the neurologist, from the ENT, from the ophthalmologist and I don't remember who else.
Get into that department and to feel the pain of other mothers and other children who were in a situation obviously more disastrous and more serious than ours was terrible. But there was solidarity and understanding. Even without telling us openly what our children had or explaining why we were there, a look, a sad smile was enough to understand everything and say what a thousand words could not have said, to make them feel their closeness and understanding.

The visits during her first year were regularly marked, as happens a little for premature babies, who are subjected to many checkups even if they are apparently healthy and in that ward she had become a bit the mascot, the puppy of the sweet pediatric nurse Anna .
The last time we were there, two days before her birthday, we had the greatest gift we could receive, after all the exams we had the definitive answer: my little girl was completely negativized and the nightmare of toxoplasmosis was gone.

I decided to tell this experience to give strength and courage to other mothers who find themselves in this situation.Often the lack of information on certain topics, precisely because they are not common, leads us to make hasty decisions, without knowing that there may also be a other solution. The shortest path that gynecologists take in these cases is therapeutic abortion and in fact, my gynecologist, when I decided to continue the pregnancy, even made me sign a sheet where I took full responsibility with the awareness of the results that the pregnancy could have or of the damage that the child could have. Even for the heavy therapies I had to sign precisely because they are dangerous and not on the market in the country (they can be found in the republic of San Marino), but I faced this decision, I inquired, I wanted to believe in it and go all the way.

Good luck to all.

add a comment of Stories: I contracted toxoplasmosis during pregnancy