Swollen and hard belly in pregnancy: what does this mean? 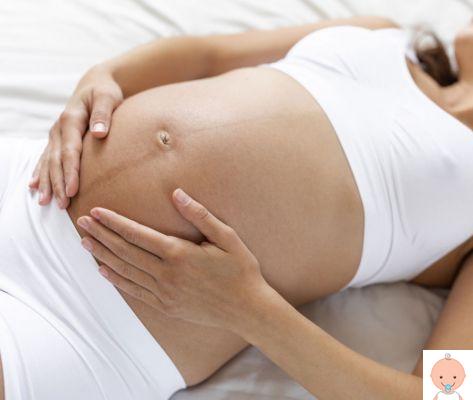 The belly grows over the nine months and changes shape, size and volume.
Sometimes we feel our belly contract at various times of gestation. These are contractions but let's see what to do.

Hard belly in the first trimester

In pregnancy the belly suffers continuous changes since the first weeks and you may have both a bloated belly feeling and a feeling of hard belly. However, it is necessary to distinguish between the various periods of pregnancy, because in the first weeks and even in the first months the belly does not undergo visible changes and therefore it is also difficult to feel the sensation of a hard belly, while the sensation of having a swollen belly is quite frequent.

So if during the first weeks and first months of pregnancy you feel a swollen belly, this is normal, because the female body has undergone major changes since conception, mainly hormonal changes, which are reflected on the whole organism, to favor the nesting of the embryo, the relaxation of the uterus, the nutritional supply to the fetus, prepare the breast for breastfeeding, etc.

Read also: How much and how does the belly grow in pregnancy

Hard belly in pregnancy, when to worry?

The feeling of a hard belly in pregnancy can be caused by contractions: a physiological phenomenon that presents itself with varying intensity throughout the nine months of pregnancy. So also in the first months, it is possible to experience sensations of weight in the lower abdomen and cramps similar to menstrual pain. They are caused by the contractions (hence the name) of the uterus, due to the effect of the stimulus of oxytocin, which increases the concentration of calcium ions. This increase triggers it actina and miosina which, causing the shortening of the muscle fibers, cause the event.

You just have to be careful if the contractions become frequent and painful, because they could be the clue to a imminent delivery. So how to recognize and distinguish contractions during the nine months of waiting and avoid unnecessary worries or warnings?

From the second trimester, the contractions occur sporadically in a not very painful form, they are due to the training of the uterus, which changes to adapt to the needs of the fetus and is already preparing for delivery.
The triggering causes can be many: from the progressive enlargement of the uterus, from the baby's first movements, from intestinal disorders (diarrhea or constipation).
In the last weeks of gestation, the contractions become more evident and painful, they serve to tone the uterus and prepare the dilation of the uterine neck.

How to prevent strong contractions from occurring too soon

with every effort, in fact, the uterus receives a solicitation and contracts. So it is good not only to avoid burdening yourself with too heavy shopping, but also to get help with the housework and, if you already have a child, try to play quiet games with them. pick him up as little as possible

because they tire the body, therefore, if it is difficult to be relaxed and serene, you can still do some relaxation exercises and dedicate moments of rest during the day.

How to distinguish the contractions?

If you feel that they last 30-40 seconds at the beginning, then they go up to a minute, with increasingly shorter intervals, if after reaching the intensity they subside until the rest phase, if the pain also involves the back and kidneys start to move and walk as much as possible if you are able because of these tions they help speed up labor.
When the contractions progress with shorter and shorter intervals, up to 10 or 5 minutes between contractions, it is time to go to the hospital unless you have decided on a home birth and then assistance will be needed. closer than the midwife.

The abdominal hardening caused by the contractions they usually only last a few seconds, after which the belly relaxes on its own. If you notice that your belly is lasting much longer or even all day long, the causes could be other such as intestinal problems, constipation etc ...

The contraction takes the whole belly and not just a part, if you feel a hardening only on one side (left or right or bottom only) it is probably just your baby pointing his feet or hands or stretching, try to gently massage the part and you will see that everything will return to normal.

Soft belly after childbirth, here's how to get rid of it ❯

add a comment of Swollen and hard belly in pregnancy: what does this mean?