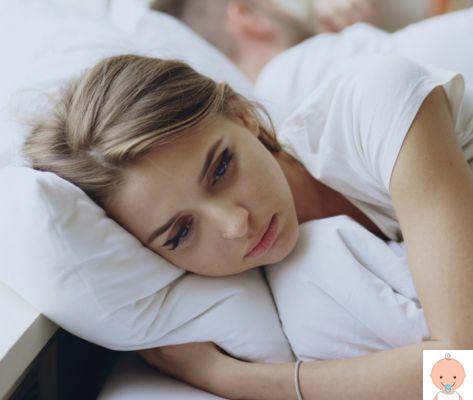 What is extrauterine pregnancy

Therefore it defines itself extra-uterine, and also ectopic, a pregnancy that begins outside the womb. In many cases the embryo implants itself in a fallopian tube (in this case we speak of tubal pregnancy); in other cases the fertilized egg can go to nest in other areas of the body, such as the cervix or the ovary.

Early symptoms of an ectopic pregnancy

At the beginning, pregnancy manifests itself like all the others: absence of menstruation, nausea and tension and discomfort in the breast. The pregnancy test will confirm the pregnancy, but as the embryo grows in an improper place the symptoms of ectopic pregnancy become more evident:

How long can extrauterine pregnancy last?

An ectopic pregnancy cannot proceed normally: the embryo cannot survive and the growing tissue can cause life-threatening bleeding. The structure that contains the embryo usually breaks down after approx 6 16-weeks, so long before the fetus is able to live on its own.

If the embryo continues to grow in the fallopian tube it could cause them to break and one internal abdominal bleeding, so in case of dizziness and fainting it is important to go to the emergency room.

What does ectopic pregnancy mean?

Ectopic pregnancy is defined as a pregnancy in which the fertilized egg does not get to nestle in the uterus, where it then grows and develops, but in a different area of ​​the body, very often in a fallopian tube. In many cases the ovum's path to the uterus is hampered by the fact that a tube is damaged or inflamed or by hormonal imbalances.

Certainly there are some risk factors which increase the chances of having an ectopic pregnancy:

How betas grow in an ectopic pregnancy

HCG levels can be monitored with a normal blood test about 11 days after conception: in a healthy pregnancy, they will typically double every 48 to 72 hours, peaking between 8 and 11 weeks of pregnancy (the end of the second and the beginning of the third month) and then stabilize for the rest of the pregnancy. It is this early rise in hCG that can sometimes cause classic morning sickness.

Extrauterine pregnancy after what is seen

A declining hCG result is an indicator that the pregnancy has ended or is about to be terminated, but it can also indicate an ectopic pregnancy that is "solves by itself"(7 out of 10 ectopic pregnancies end with a miscarriage in the first weeks).

An hCG level that is increasing by less than 66% in 48 hours means the pregnancy is likely, but not certain, to be ectopic.

In case of missed menstruation and early pregnancy symptoms, the home pregnancy test can give a positive result and confirm the pregnancy. Symptoms of pregnancy - from nausea to breast tension - typically appear after the fifth week. If you cannot see the pregnancy developing in the uterus through an ultrasound, your doctor may order a monitoring of the hCG levels to assess its growth or decline.