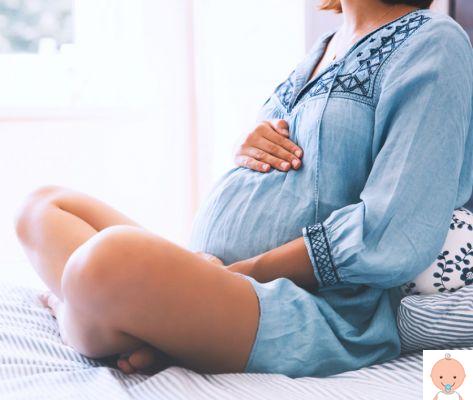 How do you know when to go to the hospital to have the baby? What are the symptoms of labor? The nine months are at an end and the impatience to see the baby is starting to give some signs. Women who are in their first pregnancy may be the least likely to recognize the onset of labor, although each pregnancy is unique and even women who have already given birth in their life may not experience the same symptoms as their first pregnancy. It is important to recognize the right time to go to the hospital, to avoid being sent home because it is too early.

Here is a list of common symptoms that you can try in the days before the birth and that signal the arrival of the big day or the time to go to the hospital.

Symptoms of near labor

In last days of pregnancy some may occur symptoms physical and psychological that indicate that the fateful moment is about to arrive.

How to tell if childbirth is near

Childbirth is approaching and to understand it we must note these things:

Here are some symptoms that can occur in the days and hours before labor:

When labor is in its early stages, we can experience these symptoms:

Many of these symptoms can be traced back to other pathologies, so it is always better to consult your doctor in case of doubts or severe discomfort.

Symptoms of Labor in a Second Pregnancy

It is said that in the second pregnancy il labor lasts less and this can certainly be true in most cases because the cervix, vaginal and pelvic floor muscles are more elastic and facilitate the baby's exit. Furthermore, you are more prepared, you know what you are going to encounter, how to push and when and how to breathe correctly. What is certain, however, is that every pregnancy and every birth are different from each other and there is no absolute truth. The woman, in her second pregnancy, will certainly be more aware and prepared and she will already have many answers to her questions. You will, therefore, be better able to recognize the symptoms, such as watery discharge, loss of mucous plug or actual contractions.

Onset of labor without symptoms

In most cases, labor is preceded by a series of rather clear symptoms, but in other cases it begins suddenly manifesting itself in the most striking way: the contractions that become more and more frequent and intense and / or the rupture of the amniotic sac (rupture of the waters). In the presence of these symptoms so clear it is good to go to the hospital right away.

What are the symptoms that childbirth is near?

Typically, the tummy drops considerably under the pressure of the channeling baby, you need to urinate frequently and breathe better.

How many days before the symptoms of childbirth appear?

The first symptoms of an oncoming taravglio can also occur a few days before the actual contractions begin. To enter the phase of active labor, therefore with regular contractions, an entire day and a whole night can go by.

How to tell if the belly has dropped?

When the baby is able to channel himself into the birth canal with his head, the tummy drops. We can easily understand that this is happening because we breathe and digest better due to the fact that the pressure of the uterus on the organs is released. At the same time, the child presses on the bladder and there is an urge to urinate more often.

Symptoms of ovulation, how to recognize them ❯