Symptoms of ovulation, how to recognize them 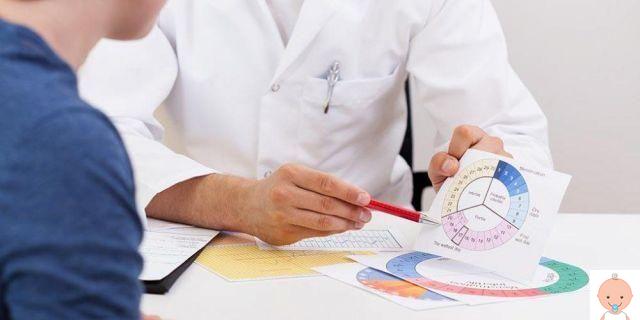 It is the perfect moment, the one to seize on the fly when looking for a pregnancy. We are talking about ovulation, which corresponds to the monthly peak of a woman's fertility. But how do you know exactly this phase of the menstrual cycle? It is not a very complicated thing. To notice the symptoms of ovulation it is enough to have a little confidence with your body. And now we explain how to do it.

The ovulatory phase is one of the 4 of the menstrual cycle. Ovulation occurs when the ovaries release the egg, which will be fertilized by the sperm. In a classic 28-day cycle, this process occurs roughly on the fourteenth day, but it is a very subjective fact.

In the event that a woman has an irregular menstrual cycle, the symptoms of ovulation are particularly useful in identifying her fertile period, the one in which the chances of conceiving are the highest. These signals consist of real physical variations. The first change occurs within your body with a considerable increase in estrogen and LH (luteinizing) hormone.

Especially for those who intend to have a baby, ovulation corresponds to the moment in which fertility is at the top and the woman therefore has more chances of getting pregnant. In addition to the day of ovulation (the so-called peak), fertility is also high in the previous 2-3 days. This is why sexual intercourse before the actual peak can also be successful.

Symptoms of ovulation: how to recognize them?

Just as the menstrual cycle differs in every woman for various factors, it is important to emphasize that ovulation can present with different symptoms. Not only. Another variable element is the day on which they appear: they could coincide with the peak of ovulation or anticipate it a little. In addition, their intensity can change as well. Despite all the possible variables, it is still possible to establish signs and symptoms that are unmistakable, and therefore easily recognizable.

One of the first symptoms is constituted by changes in cervico-vaginal secretions. What changes is their consistency. They are transparent and stringy, a bit like raw egg white. The consistency becomes stickier, which makes the environment suitable for fertilization. In fact, vaginal acidity is reduced, so as to guarantee survival to the spermatozoa, until their journey into the tubes.

In the ovulatory period, the amount of cervical mucus also increases, so much so as to give a persistent wet feeling in the vagina. If you take it between your thumb and forefinger, you will notice that it stretches, but does not break. According to experts, the variation of these secretions is the most indicative symptom of the onset of the ovulatory phase.

Symptoms of ovulation: the basal temperature

A second symptom is the change in basal body temperature. In conjunction with ovulation, the latter increases by three to five tenths of a degree. The cause of this phenomenon is the increased secretion of progesterone, a hormone that facilitates conception.

The basal temperature is measured in the morning as soon as you wake up, possibly at the same time, after sleeping at least 4-5 hours in a row, before getting out of bed and going to the bathroom. It starts on the first day of the menstrual cycle and continues throughout the cycle. The same thermometer must always be used: it can be the classic one, but on the market there are specific ones for tb. The temperature can be taken rectally, vaginally and orally.

Symptoms of ovulation: changes in the cervix

Hardly an inexperienced person recognizes them. However, it can be of help to the gynecologist, if he monitors ovulation in women. In the days before ovulation, the cervix is ​​higher than usual, more open and softer.

Pain felt during ovulation is also referred to as "mittelschmerz". This German term can be translated as “mid-cycle pain”, and therefore refers to the abdominal pain that some women have in the middle of their menstrual cycle, therefore at ovulation.

Usually the pain starts from a specific point and that is from the ovary that releases the egg. It can last just a few minutes or hours, a couple of days in the most important events. It can be light and bearable or strong to bed. Sometimes, it remains localized in one spot, other times it radiates to the entire abdomen. Other symptoms that may accompany painful ovulation are nausea, fatigue, swelling of one or more inguinal lymph nodes, spotting (light bleeding).

The only advantage of a painful ovulation is that it allows you to understand if you are ovulating.

Coinciding with the peak of fertility, it is possible for sexual desire to increase.
The increased sexual attraction towards the partner is not dictated only by the desire for motherhood: in the 2-3 days before ovulation, the ovaries reach the peak of estrogen and therefore increase libido.

And it is a positive thing: contrary to what you think, the most fertile day is not that of ovulation (by hypothesis the 14th of the cycle), but the previous 2. Sperm survive for several days in the womb, so there is enough time to "peck" the pregnancy. In conclusion, we recall the importance of regular folic acid intake.

Stretch marks in pregnancy, don't panic. The midwife's advice to avoid them ❯

add a comment of Symptoms of ovulation, how to recognize them