Ten years together: a letter from a man, and a father, in love 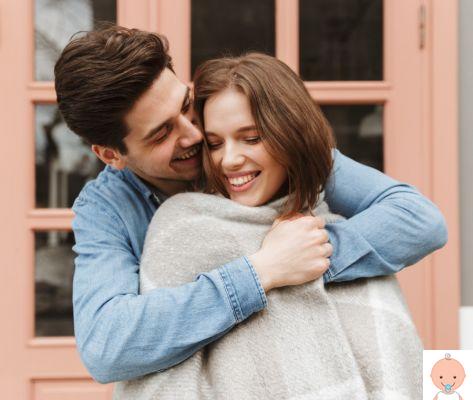 Love letter from a dad

Maybe I am in love with her precisely because he does not know how to ride a bicycle. Which seemed so absurd to me at first, we even tried one day in the park that I was holding her seat but nothing, she just lacked balance.


Already, balance. Maybe I fell in love with her because she doesn't know how to cook, she doesn't really like her so she doesn't, period. A steak is a steak, a cod is a cod. No particular sauce, no elaborate toppings. Pan and oil, that salt is also bad, she says.

Maybe I fell in love with you because you have little breast, that I have always gone crazy for the busty ones, never dropped below the third and instead I fell in love with her, who moreover cannot stand football, and does not like to listen to Vasco, who are drugs for me.

I fell in love with you because every night I beg you to sleep embraced and he replies no, he moves too much and would not be able to sleep a wink.

She who is precision freak while I struggle to find my wallet almost every morning, she who does not go underwater when we go to the sea "bothers my eyes", explains while I pinch her feet pretending to be a medusa.

Read also: "A letter for him": stories, pieces of life and emotions told by #QuasiPadre

Maybe, but maybe, I fell in love with you precisely because you represent what I was missing to feel complete. Because she is different from me, and every time she is a discovery. A bit like living.

Law he gave me a son, and she wore that mommy dress as if she always kept it in the closet, waiting to take it out for the right occasion. She thought she was uncomfortable in it, that she would fit her, thin as she is. She was afraid of being seen around, of not even being able to zip herself behind her.

Instead she is beautiful, instead she moves with care, instead when she walks I can't help but look at her. That dress of hers is from God, it seems to have been sewed on her. Sometimes she seems to change color, but it's just the light.

And it happens that I would feel like taking it away from her, finding her naked of responsibility, going back to being us. Those of the first kiss in the Yaris, those who dance in a Spanish nightclub.

But the past is a closed room, and the future is precisely that wardrobe there, from which different clothes come out every time. And today we are these, after ten years. It is always us, but something else. In April it is the our anniversary. Ten years. And it seems like yesterday, and it seems like a century.

Ten years, and how this life goes on here. That you take twenty-six on a sociology exam and when you go out you find a baby crawling, and he looks like you. Just like that twenty-six.

How time passes and how we change. Her, her hair, the photos in the frames hanging on the wall, the priorities, the weekends, the holidays, the refrigerator. How it changes. And how we run together, fortunately without a bicycle.

I'd like to tell our son about when we were light-hearted, drunk, jealous, naive. Yes, these two old men, my son, I know you will not believe it but it is so.

At the beginning I remember that we kept the count of the beds where we slept: hotels, houses, campsites, travels. We lost count after a few years. We did not know that shortly thereafter we would put a line for the total, with a "+ 1" next to it, a bed where we have never slept, but where our most beautiful dream sleeps.

Best wishes to you, who taught me that it is not enough to be a woman, wife, friend, mother. The important thing is to know how to be a partner.

add a comment of Ten years together: a letter from a man, and a father, in love