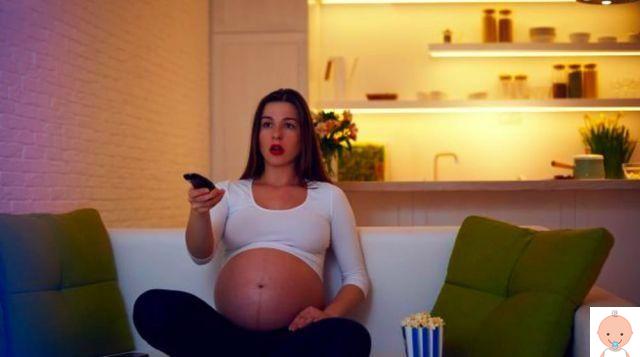 If you are considering becoming a mom (Read) but you have not yet decided, or if you already are and want to retrace the pregnancy period by seeing it again on the big screen, here is a brief overview of ten good films focused on this theme

Juno
2007 film starring Ellen Page, tells the pregnancy of a teenager, Juno, who became pregnant by a classmate. The girl decides to give the baby up for adoption and she starts dating the chosen couple to keep them informed about her pregnancy, but things seem to take a completely unexpected turn. Juno won the 2008 Academy Award for Best Original Screenplay, and many other awards including 3 2008 Independent Spirit Awards for Best Picture, Best Actress, and Best Debut Screenplay


READ MORE: Pregnancy in bed, books and sites to pass the time


Here Where the Heart Is
Novalee, seven months pregnant, is abandoned by her boyfriend in a supermarket during their trip to California and, having nowhere else to go, she decides to stop in a place she does not know but where she will discover solidarity, friendship. , the love. Here Where the Heart Beats is a 2000 film starring Natalie Portman as Novalee

Look Who's Talking
Molly (Kirstie Alley) is abandoned by the married man who got her pregnant. She then decides to carry the pregnancy to term and take care of the baby on her own. However, it is a rather talkative child who, even before coming to light, intervenes in the story with the voice of Paolo Villaggio (in the el paesena version), commenting on facts and characters and interacting with the events concerning him and his mother. The film is from 1989 and the male lead is John Travolta


Nine Months - Unexpected love affairs
Child psychotherapist Samuel Faulkner (Hugh Grant) discovers that his eternal girlfriend Rebecca Taylor (Julianne Moore) has become pregnant. His reaction between the hesitant and the terrified causes the breakup between the two, and Samuel will then have to painstakingly win back his woman by demonstrating, first of all to himself, that he is able to become a father

Big and small, colored or natural: a roundup of beautiful bellies to celebrate the exciting period of pregnancy

Junior
The gimmick of the "pregnant man" (Read) is particularly funny when it comes to the muscular macho who goes by the name of Arnold Schwarzenegger. Alex Hesse is a member of a team of scientists specializing in gynecology; when funding for one of their research projects is cut off, Alex decides to test a drug for pregnant women himself, making himself "pregnant". In this 1994 film alongside Schwarzenegger star Danny de Vito and Emma Thompson as the female lead


READ MORE: Pregnancy in bed, how to decorate the bedroom without getting tired


Very pregnant
Knocked Up is a 2007 romantic comedy starring Katherine Heigl. A successful career woman Alison ends up in bed almost by accident with eternal baby Ben (Seth Rogen). After a while Alison finds herself pregnant ...

Father of the Bride II
Sequel to Father of the Bride, this second chapter focuses on the crisis of George Banks (Steve Martin) struggling with the pregnancy of his beloved daughter, whose marriage was already so difficult to accept. As if that weren't enough, George's wife Nina (Diane Keaton) also finds herself pregnant

Alfie
The 2004 version is a remake of the 1966 film of the same name. The protagonist is played by Jude Law, who plays the role of Michael Caine. Alfie is an inveterate womanizer who enjoys playing with women's feelings, but his cynicism towards love will backfire.

The unusual suspects
Five close friends, cheerleaders from their high school, improvise bank robbers when one of them, Diane, finds herself pregnant with boyfriend Jack, and the two find themselves dealing with the financial problems associated with living together and the baby on the way. The five friends are played by Marley Shelton, Melissa George, Mena Suvari, Rachel Blanchard, Sara Marsh.

Baby Mama - A mum on loan
Kate Holbrook is a successful 37-year-old who wants to have a baby at all costs, but turns out to be no longer fertile. She asks for help from Angie Ostrowiski, a woman who is different from her in all respects. 2008 film with Tina Fey and Amy Poehler

The most beautiful short names for boys and girls ❯