The couple (in fact or not) breaks out: who pays the mortgage? 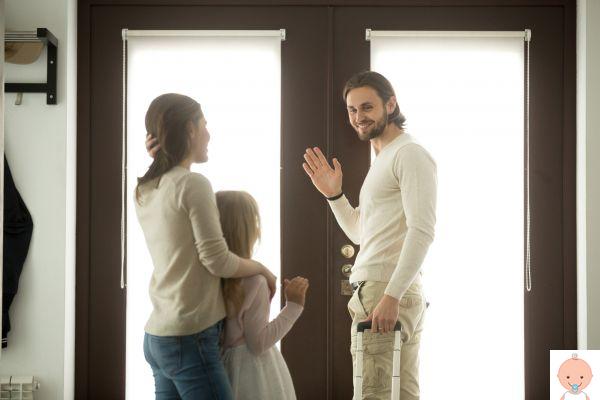 The house is the place where the family meets, the children grow up and the woman expresses herself.
The delicate economic moment that is affecting modern society, far beyond the borders of our country, it forces almost all young couples to take out a mortgage to buy a house. Despite the support of their families of origin, very few can enjoy their own "nest" without having to resort to any form of loan.
Also due to the need to ensure debt settlement, it happens frequently that the cohabiting couples jointly own the family home and the mortgage contract for the purchase.

But what happens when the couple breaks out?
What happens if the cohabitants - co-owners of the house in which they live with their offspring and co-holders of the silent one - decide to interrupt their cohabitation?
Who will pay the mortgage?
What if the couple received help from only one of the families of origin? For example, if the woman's father had paid a sum as an advance for the purchase of the property, the man - who had not done the same, or had not made an equal sum available - may be called to return of that sum or a part of it?

Let's start by clarifying that, according to the law, a man and a woman who live together in a stable way, possibly even with their offspring, are a de facto family.
The family is in fact a free union, simply founded on the willingness of the parties to share life. As such, it escapes the constraints of the marriage bond. However, this has not prevented the jurisprudence from admitting that cohabitants are required to provide mutual assistance and must equally contribute to the family menage according to their possibilities. This admission responds, if nothing else, to ethical and moral reasons. After all, the de facto family, despite not having obtained the chrism of legality through the marriage bond, however, it creates a community of people that coexist physically and emotionally. In this sense, it cannot absolutely be denied that cooperation and collaboration derive directly from this broad and effective communion of life, intentions and affections.
Technically it is concluded that in constant communion the collaboration between cohabitants is recognized as the fulfillment of natural obligations.

In practice, the ex-partner who, in constant cohabitation, has spontaneously paid the mortgage payments out of his own pocket, will not be able to ask for any reimbursement.
By paying them, he did nothing but fulfill a natural obligation that arose as a direct consequence of living together.
Similarly, the former can claim nothing (neither in terms of compensation, nor in terms of restitution) who, for the entire course of cohabitation, has personally borne the economic support of the entire family unit.
The above is valid for the period of time in which the couple lived together as husband and wife.

Otherwise, it may be the case that the former partner continues to pay the installments of the joint mortgage even after the end of love and life together.
Here the speech becomes complicated. And the law, unable to base its considerations on the objective fact of the existence of a community of persons and affections, is called upon to investigate other and more detailed elements.
The jurisprudence seems oriented in the sense of admitting that this payment continues to embody the typical case of natural obligations. To this end, however, he claims that two conditions are met:
1. fulfillment must continue to be spontaneous;
2. the continuation of the payment for only one of the former cohabitants must be compatible with the economic strength of the person who takes care of it.

Under the first profile, the ex who pays must do so of his own free will, without being asked or suggested.
From the second point of view, however, the concrete economic possibility of the payer to support the mortgage payments without an excessive disadvantage, or without an unbearable burden, must be assessed.

Baby how much do you cost me!

From diapers to high chairs, to games: the birth of a child is a drain on families. But something can be saved

Here what matters is the mathematical relationship between the amount of earnings declared by the ex and the mute installment. In other words, it is necessary to evaluate whether by subtracting the amount of the installment from the earnings the residual substances are such as to allow a good and dignified standard of living. Only in this way will it be possible to understand if the payment is made without excessive burden.
In conclusion, if the ex continues to pay the installments spontaneously and can afford it, he fulfills a natural obligation. With the consequence that its fulfillment frees both obliged parties from the burden of the paid installments. Moreover, with respect to these accruals, the former who freely took charge of them he will not be able to claim any refund.

What can happen, however, if the ex does not pay spontaneously or cannot afford it?

It remains in the possibility of the same payer, who does not meet the accruals spontaneously or does it with a large burden, to request compensation.
A situation like this, which is the subject of our examination, can in practice integrate the case of undue enrichment. So if the payer does not act freely or, even more so, could not afford it, the one who takes advantage of this payment is enriched to the detriment of the payer. Or, even more simply, the payer in fulfilling it charges a disproportionate weight compared to the advantage enjoyed by the co-payer. In the present case, the former pays the jointly held mute and the other party, while not cooperating, remains co-owner of the property and also frees himself, installment after installment, from the burden of the debt.

For the sake of completeness, a further clarification should be added:
even if the ex pays spontaneously and can afford it, he is not subject to any legal obligation that requires him to continue to pay the installments alone for the entire course of the loan.
In fact, where the loan is jointly held, the obligation towards the bank to pay the installments rests on both contractors.
The bank does not care which of the two and in what capacity you pay. In fact, by virtue of the so-called passive solidarity, whoever fulfills the payment of the installment due also frees the other. However, this does not mean that those who have paid cannot retaliate against the co-debtor for the part due to him. Unless otherwise agreed at the time of signing the contract, two joint and several obliged persons each owe half the amount of the installment.
In conclusion, at any time the former could legitimately suspend the payment of the entire loan installment or in any case demand the contribution of the other party to the payment of the sum due.

From the moment of the request there is the possibility of having to return the money. Otherwise, for what has been paid before the aforementioned request, all that has been said previously remains valid. In other words, requests for restitution or compensation cannot be accepted.

The fact that both the former spouses or just one of them paid the mortgage payments does not affect the title of ownership.

With regard to the deposit paid as an advance for the purchase of the house by a parent, it is essential to understand whether it assumes the characteristics of the "Gift" made to the couple or the loan.
In the first case, it is legally classified as a donation which in no way can be claimed back. In the second case, otherwise, like any loan, it must be repaid

Depression in women: what happens in the couple relationship and in children ❯

add a comment of The couple (in fact or not) breaks out: who pays the mortgage?