The fetus hears music as early as 16 weeks 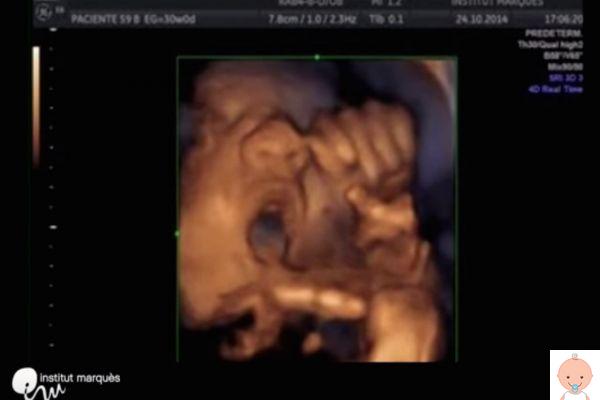 The baby feels music in the belly

Can the fetus hear the music inside the baby bump? We know that the baby in the belly listens to sounds coming from inside the mother's body but also those coming from outside, such as the voices of the parents, and manifests pleasure or irritation depending on the type of sound.

But a study just published in Ecografy and conducted by researchers from the Institut Marques of Barcelona has shown that the baby can perceive music as early as the 16th week of pregnancy. And the study is accompanied by some photographs taken from ultrasound scans that show how the facial expression of the fetus changes in response to listening to music.

The baby moves his mouth and tongue as if trying to sing or speak. The researchers are thrilled because they are certain that they have been able to communicate with the fetus and push it to make precise movements, using music.


According to scholars, music activates the brain circuits that stimulate the language and communication (which also confirms that learning begins from intrauterine life), but the response from the fetus is so evident only if the music is perceived intravenously (as scientists did using an instrument created especially for this purpose). If the music comes from outside and has to go through the mother's belly, it is not perceived by the fetus in the same way.

Read also: What the baby feels in the belly

But what does this study make us understand? The researchers specify that for the first time we know with certainty that a fetus can hear already at the 16th week, using music therefore allows us to exclude the deafness of the fetus, music stimulates the baby's brain circuits, especially those involved in communication.


It also makes us understand why it is important to take care of well-being of the child already from the first weeks of pregnancy. If learning begins already in the belly then we understand well how important it is to send positive messages to the fetus, stimuli that guarantee well-being and promote its harmonious development. Hence the beauty of hearing music during pregnancy.

But what does the fetus feel in the belly?
The baby is immersed in amniotic fluid protected by the uterine walls, so he lives and grows in an extremely muffled environment. However, it is not a silent world: the mother's heartbeat, her breathing, the noises coming from the bloodstream and the stomach, help to create a universe of sound to which the child is accustomed from the first days and do not cause any reaction in him. indeed, they are part of his world and do not prevent him from sleeping.

When the sense of hearing develops, the baby is able to feel the voice of the mother and that of the father, sounds that become familiar to him and that he will somehow recognize at birth. But he can also hear sudden music and noises. And already in his mother's womb he is able to make us understand, with precise facial expressions, if what she hears bothers him or likes him.