The first ultrasound in pregnancy: how many weeks to do and what do you see? 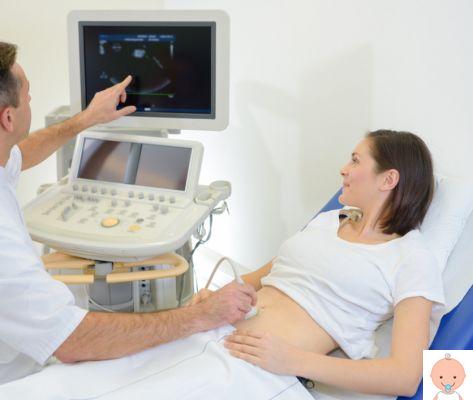 At how many weeks should the first ultrasound be performed?

The temptation would be to do it as soon as you discover the pregnancy, but it would be useless. This is because the baby would be so small that it could not even be visible. A tiny dot begins to appear around 7 weeks (i.e. 7 weeks after the last menstruation, which corresponds to about a month and a half). The ideal moment, however, is around the 10th - 11st week, when the baby is old enough to be able to show us the heart and the fetal appendages (which are the placenta and the amniotic sac in which the fetus will grow) and check that they are placed in their final position.

Read also: Exams to do in pregnancy

How is it done?

If we think of the word ultrasound, we immediately think of a probe on the stomach with a lot of gel. In this case it will not be so. In fact it is preferred to use the internal or transvaginal probe (the abbreviation that you can find written is T / V). The reason is very simple: the uterus is not yet large enough to pop out above your pubic bone, so until this happens it is very difficult indeed, almost impossible for anything to be seen. But you can rest assured it is not painful and it is not even dangerous for the baby.


The diagnostic method is based on instruments that produce ultrasound, that is, sound waves that are not audible to the human ear, the echo of which is collected by probes and displayed on a screen. It is important to emphasize that ultrasound is an exam absolutely painless and totally harmless. It is worth remembering because sometimes press reports denounce "damage" from ultrasound and such news are regularly denied by authoritative study centers around the world and by the statistics collected to date.

What do you see from the first ultrasound?

It is called dating ultrasound, meaning its main purpose is tell us the gestational age of the baby, when it was conceived and when it will consequently be born, after about 40 weeks. On these date counts I would like to say two more words, you must not think that our body is a clock, also because the presumed date of birth is established through a mathematical formula that has the possibility of making small errors. This is because the day of birth is calculated based on the measurement of the length of the baby, one millimeter more or less is enough and the date also changes by 3-4 days. It is for this reason that it is called the "estimated date of delivery".

There are other important parameters that the first ultrasound evaluates:

The first ultrasound is generally performed around the ninth, tenth week and essentially serves to assess whether the placenta and embryo are well implanted, whether it is a multiple pregnancy, whether there is cardiac activity. In case of anomalies the gynecologist will suggest the most suitable behavior: for example a little rest or progesterone to favor embryonic implantation and correct placental development.

How many ultrasound scans are done during pregnancy?

After this first ultrasound, others will follow, the number is at the discretion of the treating gynecologist. In addition to this, our National Health Service offers two more free ultrasounds at 20-22 weeks (morphological ultrasound) and around 32-34 weeks (growth ultrasound).

All the other checks (generally monthly) will be used to verify that the child is well, that his heartbeat is regular and that the amniotic fluid is present in the right quantity.

Obviously, an exception is made for those cases in which there are different requests by the gynecologist for particular symptoms or pathologies of the patient.

However, my advice to all mothers is to let yourself be excited and live these short moments in the best possible way. These are the possibilities that you have to begin to see and know your child, use them as much as you can.

The first night at home with the newborn baby ❯

add a comment of The first ultrasound in pregnancy: how many weeks to do and what do you see?