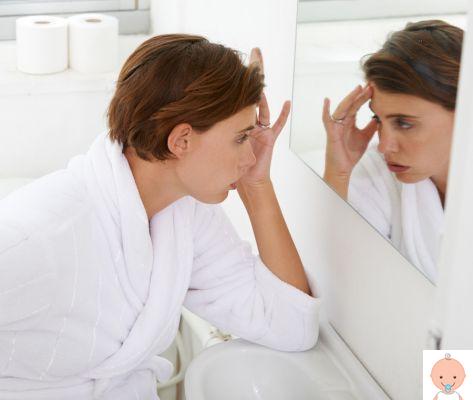 Melasma is a blemish of the skin, a browning a patches usually of the face, caused by an excessive accumulation of melanin (the tanning pigment). Appearing especially among pregnant women it is also called pregnancy mask, or more commonly chloasma.

Le spots brownish are very evident and mainly affect the face, and especially the forehead, the area under the eyes, or above the lips, cheeks or chin. There are cases in which the spots extend to the neck and behind the ears. I'm from rather irregular shape, without very defined outlines. The cases in which the spots also affect the arms and legs are rarer. It also appears that chloasma is more common among darker-skinned women.

Read also: Pregnancy disorders: a remedy for everyone

The patches are evident especially in the summer when you are more exposed to the sun, but it should be remembered that the melasma, being a chronic condition, it does not disappear in winter, but changes color. There melanin in the colder months it is not stimulated by the sun, so the color tends to lighten.

The true causes are unknown. It is thought that the estrogen hormones stimulate an excessive production of melanin after exposure to sunlight, or UV tanning lamps. Melasma can also appear with a 'hormonal alteration resulting from pregnancy, or the use of the contraceptive pill. For this reason chloasma is very common among the pregnant women. The appearance of a brown line on the belly of some future mothers is due to the same hormonal upheaval.

Furthermore, even the use of perfumed cosmetics or certain medications can lead to the formation of spots on the skin. According to some scientists, the real cause would be it stress, and in this case the endorphins and enkephalins, hormonal substances released by the brain, would induce skin pigmentation, and therefore the appearance of the spots.
Furthermore, genetic predisposition seems to play an important role in the onset of chloasma: for example, subjects with thyroid disorders would be more likely to manifest the disorder.

Melasma, how long does it last?

In case the melasma is related to an ongoing pregnancy, the spots usually appear between the fourth and sixth month of pregnancy, and disappear after childbirth. Some mothers due to the presence of chloasma even after giving birth. The spots can usually persist into the baby's sixth month, and in some rare cases even beyond.

Melasma can last for several years, or remain permanent. In this case there are treatments aimed at depigmenting the affected area. But before starting any drug therapy it is necessary to consult a specialist.

Remedies for spots in pregnancy

Melasma gravidarum and sex of the child

How to distinguish leukorrhea from amniotic fluid?