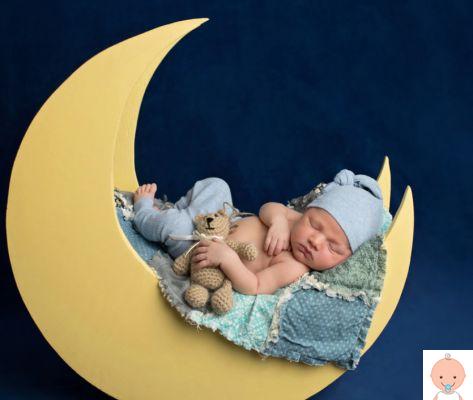 Influence of the moon on the date of birth

In ancient Greek mythology, Artemis was considered the patroness of births. This is because, according to legend, when Leto found herself having to give birth to the two children that Zeus had generated in her, Artemis, who came into the world first, helped her mother to give birth to her brother Apollo. And still today it is a common and deeply rooted belief that the moon affects the date of delivery and labor. Let's see how this theory could be realistic.

First of all we know that, according to what they say, the moon with the its different phases it could affect many aspects of the life of humans, animals and nature in general. Among these, the moon would act directly on: hair and nail cutting, wood cutting, sowing periods, food storage, laundry period, wine and oil production, predisposition to gain weight, killing and slaughtering of animals, fruit harvesting, removals. , luck in the game, house cleaning, painting, creative activities, decisions to make, trips to make, hunting and fishing period, behavior and moods, crimes in general, seismic and meteorological events, worsening of clinical pictures, operations in bursa, menstrual cycles, and of course conception, frequency of deaths and births.

For example it says that if the conception it happens when the moon is waxing a boy will be born, while if the fertilization takes place with the waning moon then a girl will come to light.

Not only. The moon phases would also be linked to other beliefs:

Of course, there is no certainty or scientific confirmation of this theory regarding the determination of the sex of the child.

What to say, instead, of the possible connection between the moon and the date of birth?

Given the coincidence between the lunar cyclicity and female biological cyclicity, the former is thought to affect the latter. For some, the greater frequency of births is recorded on the days of a new or waning moon, while for others this increase in births would occur in conjunction with the crescent moon or with the full moon. In general, however, proponents of the theory of the moon's influence on childbirth and birth state that the odds of giving birth increase when there is a waning or a waxing moon.

Read also: Calculation of the weeks of pregnancy

A study conducted by aSpanish midwife pointed out that there was no correlation between the full moon and the frequency of childbirth, but also showed that there could be a greater frequency of spontaneous births (and therefore breaking of the waters) when the moon was waning, while with the waxing or full moon the Caesarean sections.

While just recently a study conducted byUniversity of California pointed out that concomitance with the days of the full moon there would be no peak of births and according to the researchers it would therefore only be a popular belief.

But why is this belief so ingrained?

The basic idea is that the moon exerting its force on the tides and on the water, also affect the amniotic fluid. In practice, the supporters of the Moon-birth correlation affirm that since the Moon causes the tides this satellite would also have the same effect on humans who are composed of 75% water and on the future birth, since the fetus is immersed in the liquid. amniotic.

Il lunar cycle it has always been a time reference tool that allowed humans to calculate the time elapsed before the birth of a child. And of course the moon phases they also quickly became a way to initiate labor or somehow predict when delivery would take place.

Mysticism, popular beliefs that have been handed down from generation to generation, superstition: certainly, as we have said, more than one scientific study has investigated veracity of these theories and none have been able to really confirm that the moon can affect the date of birth. In short, we can also believe in these deep-rooted beliefs but there would be no certainty about it.

However, if we want to imagine that we can be influenced by the moon we can consult the lunar calendar last month of pregnancy and take a look at the phases of the moon in the days preceding or following the presumed date of delivery: the new moon and the full moon will be well indicated and we can imagine what day we will hug our little one for the first time, we only have to choose whether to believe that it is the new moon or the full moon that will influence us!