The Kristeller maneuver, what it is and when it is done 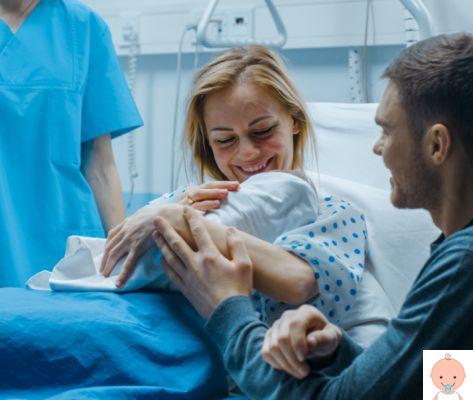 "They made me give birth by pushing on my belly" is how many women describe it Kristeller's maneuver. The scientific definition of the maneuver is actually this: to apply pressure on the bottom of the uterus to invite the baby to descend into the birth canal and be born.


It is seen very often in films and in some advertisements, it is the best known "to give birth" maneuver together with the suction cup and those who have tried it may have two different reactions to the pain that this maneuver causes: some mothers say "luckily that I they did it or my son was not born "while others say" I felt empty, it was violence ". Let's try to understand together what it is, how it is performed and when it should be performed.

The practices to avoid in order to have a good birth

What is the Kristeller maneuver

A birth in which it is necessary to perform this type of maneuver is called operative delivery and there are two (sometimes three) operators who assist the birth of the child: the midwife and one / two doctors.


The operator who is on the woman's side at the side of the bed (this maneuver is performed only in modified lithotomy position, the one we all have in mind: supine and with the legs on the leggings), pushes with the forearm on the bottom of the uterus or on the highest part. The pressure is made in the expulsive phase then during the contraction and in the direction of the birth canal.

La Kristeller's maneuver was born in Germany in the mid-1800s, when childbirth assistance and knowledge of the mechanisms that lead to the birth of the child were certainly neither optimal nor complete. I say this because this maneuver is a lot controversial in its application to the current parts, and we will see together why.

What the World Health Organization says

In his guidelines, those that have the greatest worldwide scientific relevance, for intrapartum management (i.e. for the methods of assistance during childbirth) updated in 2022, the WHO defines the Kristeller maneuver as NOT recommended.

This is because there is no evidence that through the use of this maneuver, the birth is "better" nor that the maternal or baby's well-being improves. Although we can imagine that giving this help can shorten the times of labor and delivery, there is no scientific evidence even on this aspect.

Furthermore, being a pressure exerted by a human hand, we cannot even think that the force exerted is the same for everyone, in some cases an excessive force can cause damage and therefore the WHO advises to avoid applying this maneuver.

The position of the WHO is so clear that in some countries such as England and Spain applying this maneuver during spontaneous birth assistance is even declared illegal and punishable by law.

Not all countries and not all contexts are the same, there is a great variability in the application of the WHO guidelines that are not a law, simply of the practices suggested by the collection of large international scientific studies. And in el country? Let's see what happens.

The Istituto Superiore di Sanità el Paese in 2022, given that in other countries the intrapartum use of the Kristeller maneuver had already been abolished, asked a parliamentary question on the subject bringing the major scientific studies as support to the question and asking that we expressed ourselves clearly and uniformly on the matter.

Furthermore, the Senate urges theprofessional update about thelabor assistance to avoid having to apply this maneuver, by reading the guidelines on Physiological Pregnancy drawn up by the Istituto Superiore di Sanità and updated to 2022.

In short, this whole part a bit 'in technical language we need to conclude that neither the highest international body in the scientific field (the WHO) nor our legislators and the villagers, believe that the Kristeller maneuver should be applied. We have also mentioned some adverse cases, but what are the consequences of Kristeller's maneuver?

Read also: What the baby feels during labor

The same Senate of the Republic in 2022 issued an act (act number 3-03648 in the 802 session of the Inspection Commission) in which it went to analyze the studies on the consequences of applying the Kristeller maneuver during labor.

22,3% of women said they had undergone the maneuver and some of them reported consequences in the short and long term regarding your own health and that of the child.

The consequences referred to are quite heavy, and the damage is significant and permanent on both the newborn and the mother. I mention only some of those reported as "cases", or how adverse events occurred by carrying out this maneuver:

As you can see, these are no small risks but before moving on to the damage I would like to consider what they are consequences less clinically relevant, but perhaps very important from the point of view of the birth event. Having such a high degree of "aggression" during labor can be very frightening to the mother that she often reports feeling as if she has been abused. Often, in fact, not only is the Kristiller maneuver applied unnecessarily, but also without warning the woman or giving reasons for her choice, she is simply imposed on her from the top of the health experience.

Doing this means starting the mother with a sense of inadequacy ("they had to help me to give birth to my baby because I couldn't do it" is a phrase that we hear very often) and of important inferiority regarding her role, and making her become the road even more uphill than it already is.

In addition, in this way we will give the mother a birth experience that is not at all serene, indeed I would say traumatic, also undermining that image of achievement and serenity that this wonderful event should bring.

The damages listed as a possible consequence of the Kristeller maneuver are really important and range from broken ribs, to vaginal and uterine injuries to its rupture. Without forgetting the detachment of the placenta which, in addition to creating problems for the mother, causes the lack of oxygenation to the child just as he is about to make the transition to extrauterine life, so perhaps in the moment of greatest need.

Finding yourself faced with a rupture of the uterus or a placental abruption means passing from an operative birth to an obstetric emergency, in which you have to intervene immediately and often this is equivalent to an emergency caesarean section in which you decide to remove the uterus if excessively damaged.

In the short term, and without thinking about the most tragic events, we will have a mother who will have pain and difficulty in movement and therefore yes it will delay contact with the baby or in any case she will need assistance and therefore we will have pushed this mother towards an "addiction" to the health personnel when instead the objective should be the opposite.

Finally, in the long run, mom can experience:

In short, to conclude, Kristeller's maneuver in the country is true, it is not prohibited by law but being very very dangerous and having no positive value (ie having no benefits in any case) it is highly not recommended. Find out about the statistics of the hospitals you have chosen to give birth to, listen to the stories of other mothers about their births and so you will be able to evaluate for yourself if and how to expose yourself to the risk of this maneuver.

add a comment of The Kristeller maneuver, what it is and when it is done