The most beautiful tattoos of moms 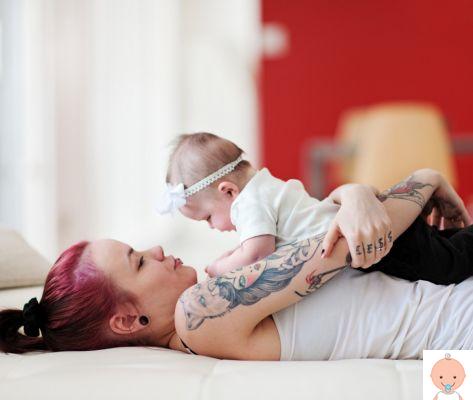 More and more people decide to get tattooed. A few years ago - I know because I did it too - when the phenomenon was not yet so widespread, we went to the tattoo artist, we chose a subject from a catalog (usually it was about tribals, hearts or little animals) and had that engraved there. In this way I got 4 stars tattooed on my foot and one behind my back. I don't regret it, but at the time I didn't think much about the design that would stay with me forever: I wanted a tattoo and I chose for the least bad one, considering it would stay with me forever.


Today instead tattooing is considered a real art and since there are many more tattooed people, those who do it as a profession become a kind of point of reference. Years after my first tattoo "among the stars" I chose to tattoo myself again: on my shoulder I engraved a thought by Goethe that reads "Whatever you want to do, start it" (it is longer than that, actually). I got it tattooed to close the circle with my postpartum depression story when I finished therapy and started helping moms with my website. On this second occasion I spoke at length with my tattoo artist, who tried to understand why I had decided for that series of verses.

In short, those who decide to get tattooed do not do it for fashion, but to stop a memory in time, as if it were a photograph on the skin. This is why he has much more say in the design that will make up the tattoo: represents an important part of its history, an important moment or a person you want to remember. And what better time is there for a new tattoo than that of the birth of a child? Many mothers - and many fathers - in fact decide to immortalize the moment that changed their lives forever by making it even more present with indelible ink.

Hollywood stars teach: the first example is certainly that of Angelina Jolie, who engraved the coordinates of the places where all her children were born on her arm. Even the top Heidi Klum has decided to dedicate a drawing on her skin to each of her 4 children. Not to mention-among the famous dads-of David Beckham whose body is literally covered with 47 tattoos, among which stands out “Buster”, the nickname by which he calls one of his sons. We may not get to that number, but if you want to get a tattoo, it is good to inquire first. For example, it is wise not to get a tattoo during pregnancy: this is because the immune defenses are lower and this can make the expectant mother more sensitive to infections and possible more important complications. In addition, he may have a rejection of the pigments of the tattoo color; it is a condition that continues even in breastfeeding, which is why it is advisable to postpone not only pregnant but also breastfeeding to the end.

Moms Tattoos | The photos of the tattoos of our planetary mothers

To keep in mind is obviously hygiene: make sure that you are using only disposable and sterile needles, and the location you want to put the tattoo on (and related pain). So if you are undecided whether to get a tattoo or not, here are some tips.

Tattoos with the symbol of the son

Tattoos with the symbol of the child are usually done to honor the birth of your child; they can have a particular meaning depending on what it represents for parents.

Tattoo for the birth of the son

Deciding to get a tattoo for the birth of your child certainly wants to make the idea of ​​the indissoluble bond that has just begun even stronger.

Choosing to tattoo phrases for your children is certainly very personal. In general, therefore, you should not choose them on the internet or among the cards that are in the menu of the famous chocolates, but be sure that they really represent us. They can be excerpts from songs or poems or why not even books.

Personally, I believe that when and if I get a new tattoo I will get written a phrase said by my daughter Paola: "The man hugged the girl so tightly that he no longer felt his heart." As you can see, they are all personal considerations and each one is free to affect what binds her most to her little one.

There are no beautiful or better phrases, simply those that feel their own.

Where to get the tattoo with the name of the child?

If you want others to see it too, you could get a tattoo on your forearm, foot or shoulder. Better to avoid areas that will suffer from the weather, such as the biceps, unless you go to the gym every day (otherwise in many years you could have the "curtain" effect). It also depends on the type of work you do: if for example you have to wear elegant clothes, perhaps because you work in the company, perhaps it is not advisable to have those parts of the body that may be more visible. Finally: evaluate yours pain resistance: wrists and arms are the easiest areas, while back, back of foot, calves are really more demanding.

add a comment of The most beautiful tattoos of moms