The movements of the baby in the belly 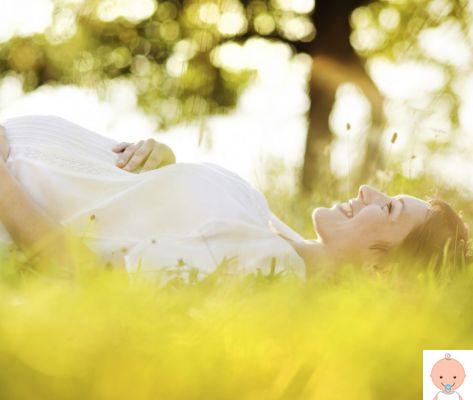 Movements of the baby in the baby bump

The pregnancy is progressing well, the mother is in great shape, her body is healthy and the tummy is already evident. But this future mother still cannot perceive the baby's movements. She eagerly awaits the moment when she will feel a very small change in the stillness of the womb. That moment occurs on average around the 18th-20th week. The amazement is very strong, the doubt that it is only the movements due exclusively to the "air" in the intestine, too. In fact, the very first movement of the fetus is so delicate and fleeting that it often leaves the doubt that it belongs to the child.

The first flicker, the first flicker, the very first bubble that a woman perceives is an extraordinary and very exciting event. In reality the fetus already during the seventh week of pregnancy swims happily in her small environment, but its slight movement and its tiny small size make it hidden from the mother. Read also:

From flickering to first kicks:

With the passing of the weeks, the doubt that it is the baby and not simply the movements of the intestine decreases. The little one becomes evident, begins to throw the first kicks and the very first punches, pirouettes, swims and stretches. The space around him is still large enough for his evolutions and this allows him to do gymnastic activities for the happiness of his mother. The woman can dedicate herself to this new activity of listening and participating in her baby's movements. She begins to understand what hit her, and she can stroke the part of her that she moved. This can make the little one reassure, or it could make him move again. The mother and child begin to interact in the their first game together. The father will have to wait until the sixth month to feel the first movement of his child, but to chase the lumps that will be produced on the belly of his partner, the seventh month of pregnancy is ideal. The mother can involve her partner by placing a hand on the part of the belly that has moved. This small gesture is fundamental for the psychology of the future father, thus begins to actively participate in waiting, he doesn't just see his partner change now he really feels the baby's presentation that awaits so long. The father thus begins to feel real the approach of his new role in his family. He is turning into a father anxious to see his baby.

During the seventh month the movements begin to be strong and noticeable, the mother may be awakened in the middle of the night by the strong kicks of her child, and she may begin to perceive a repeated and light rhythmic movement in the lower abdomen: hiccups.
The little one is preparing for external life. Her strong and organized movements will be felt until the end of the pregnancy, even if the space in the uterus has become uncomfortable for her evolutions. During the last month of the third trimester, the mother will be asked to pay attention to the baby's movements, they should not be less than ten per day, because this demonstrates the state of health and good oxygenation of the fetus. If one day you should perceive less than ten distinctly, it is better to visit your gynecologist or the emergency room. Perceiving the movements of life as it grows is a unique and indescribable sensation, perhaps the strongest a woman can experience. Knowing that that little movement is none other than the child who demonstrates his presence to his mother, it is such an exciting and intimate event that it will remain forever in a mother's heart.

The movements of the baby in the belly, Video

The movements of the fetus in the belly. How to tell if it moves or not ❯