The movements of the fetus in the belly. How to tell if it moves or not 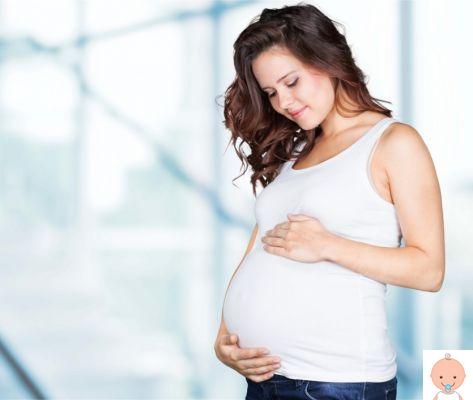 The baby does not move

Certainly one of the most exciting moments for a mother-to-be is to start feeling the first movements of the baby he carries in his belly. A realization of the dream is immediately unleashed, that is, the mother realizes that the baby really exists and that he makes himself heard. However, there are times when we don't feel it, or we can't understand when it moves, how it moves, all our friends have heard their baby before and we still have nothing ...this generates fears and insecurities. Let's try to clarify a little together everything that concerns the movement of the baby in the belly.

When you feel the baby move

The first and clearest problem for a mother is to understand when she feels her baby move. In mothers who have had bad experiences of abortion in the past, this moment and therefore is extremely important they look forward to it. In reality, there is no specific week in which you must necessarily feel it move, it depends on several factors of both the mother and the child. Some women start feeling it a 16 settimane, others at 22, in any case both possibilities are not synonymous with something wrong.


Let me explain better, you have to imagine that the green bean that you have in your belly when it begins to have the ability to make some movements, to move the limbs, is about 8-9 cm large. Those 8-9 cm are immersed in a liquid that keeps the walls of the uterus stretched out. So unless its legs touch the wall of the uterus it is extremely difficult to feel it move. Furthermore, a lot also depends on where it is positioned, if it is close to the anterior wall of the uterus (near your belly to be clear) we will feel it much more than when it is positioned near your back, this is because on the abdominal wall we have more receptors. sentitive-tactile with respect to the column. Biologically we need this because our most delicate organs are in the abdominal cavity and therefore having a wall that is sensitive to pressure, to movement, allows us to preserve them. Finally, it is also an important factor whether the mother is used to listening to her body or not, whether she has a good proprioception (so they say with rather complex terms). Mothers who are used to listening to their body even outside of pregnancy (for example, there are women who can understand when ovulation occurs because the body sends a clear signal and they perceive it) will be easier to hear their baby first. , and it is the mothers who already tell you at 16 weeks that it moves.

But how does the baby move? How can I immediately understand that it is him and not my intestine for example? At first it's not very easy, the feeling is just a feeling of flicker, almost as if it were an intestinal air passage. A gentle touch sensation. So much so that many mothers tell me "but is it possible that I have painless abdominal colic or produce gas even if I don't want to emit it?". If we are around 16-18 weeks, I tell them to notice if this sensation is always there or only in specific moments, limited to a few moments and so we understand that it is the baby who moves and not the intestine.

When it gets a little bit bigger, around the end of the fifth month, beginning of the sixth month, your feeling changes. Now you will be able to clearly perceive that it is the baby. It begins to give you the first kicks that are recognizable just like a localized pain in a certain area of ​​your belly. Dry and instant blows that can repeat for a few minutes when the little one is particularly unleashed. As it gets bigger you will be able to perceive even when it turns upside down, in that case the sensation is a little more similar to that of flickering, but which involves the whole belly. I tried to describe as clearly as possible how a child moves but the sensation is and remains individual, there are those who instead of a flicker call it an overturning of the internal organs, those who define soccer as a very strong kick ... it depends a lot from your physical sensitivity once again.

Because it moves little

There are conditions in which children move little and they are not necessarily problematic situations. Let me explain, babies can feel what their mother is feeling and what she is doing thanks to the fact that hormones reach them through the placenta. So they know when mom is busy at work, when she is tired, when she is happy and when she is excited. And they behave accordingly. So it often happens that during the day, while the mother is at work, she makes themselves heard less, while in the evening when she is relaxed at home she can take up space because the mother has no other thoughts.

However, if the mother gets very angry, they come to say "Mom don't get angry, I'm here" (to tell the truth there is not much scientific evidence on this but I like to think that it is for this reason, because she wants to communicate with the mother and understand his moods). Then it exists a more strictly physiological reason why babies move less. First of all, when they sleep (and have much longer sleep cycles than ours) they don't move much, as well as towards the end of pregnancy they move less because they just don't have more physical space to do it. It is therefore absolutely physiological that towards the end of pregnancy you will no longer feel overturned and kicks to no end.

What to do if you don't feel its movements

But what should we do when we don't feel it? This is a bit like the central question that interests all mothers and I will try to give you some suggestions. First, don't rush to the hospital immediately.

I haven't felt him move in days

If you haven't felt your baby move for days, if you try them all from food variation (providing sweeter and more energetic foods that can activate the baby) to talking, stroking, it's no longer the time to wait. We usually give ourselves 24 hours to hear even a single soccer. If this does not happen, you need to go to the hospital to check what is happening. There are cases in which the fact of not hearing it move is linked to one particular stressful condition of the mother (of any origin, from work to family, to personal fears) who loses focus on the child to worry only about something else. In this case, the visit to the hospital with the ultrasound will allow us to rule out problems and it will have been just a moment like this. Usually when this happens, moms get so scared that they start spending more time on pregnancy and less time on other activities.

Unfortunately, there are also cases in which we meet what we define MEF or fetal intrauterine death, or for reasons that are often unknown, the 7-8 month old baby dies in the mother's womb. For this reason it is essential to go to the hospital not after days in which the child does not make himself heard but at the latest after 24-36 hours. Clearly the fact of feeling the baby move must not become an obsession, although I realize that for some mothers with stories of pain passing these words do not make much sense. By obsession I mean that it is not necessary to focus every minute of the day on every little movement in the belly, this would only increase the stress levels and therefore the risk of the baby moving less precisely because the mother is stressed. Let's take a moment of the day (or two or three if it makes you feel calmer) and dedicate it to the child, to listening to him and to the small talk we can have with him. We also express to our baby what we are afraid of and you will see that he will react. I would also like to tell you, however, that if you are not calm one day no hospital will chase you away, they will do the control ultrasound and so you can be sure that everything is fine. Enjoy the sensations, the emotions that feeling your baby causes you, and know that even if you worry you are beautiful mothers.

add a comment of The movements of the fetus in the belly. How to tell if it moves or not