The pains, what pain! What they are and how to recognize them 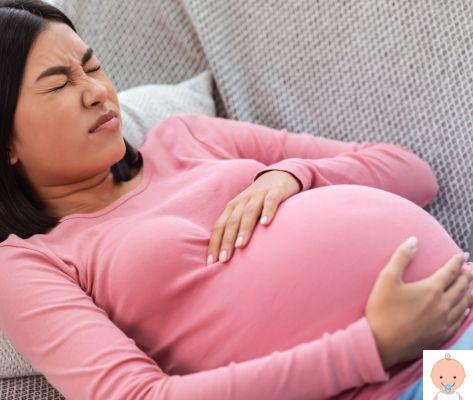 The labor pains in pregnancy

Le labor pains, or contractions, affect every woman towards the end of her pregnancy. The expectant mother, in fact, in the last weeks, days, before giving birth, begins to feel unmistakable annoyances, more and more intense and close together, she signs that the baby is close to being born.

Very often, however, especially if it is the first pregnancy, the woman may be frightened, not knowing what to do, how to react and if what she is actually feeling is pain or something else.

In this guide let's find out everything about labor pains, what they are, how to recognize them, how long they last, what are the preparatory labor pains that indicate that it is time to go to the hospital.

Read also: The childbirth suitcase to take to the hospital

What are labor pains

We start talking about labor pains, more commonly called contractions, already in the preparatory courses, but a lot of information can also be found on the web and this can cause some confusion in future mothers. For this we try to clarify.

Pain is a term that derives from the verb dolere which is synonymous with feeling pain, hurting. The pain, in fact, initially causes discomfort and - going forward - increases causing intense pain and preceding labor.

Pangs, how to recognize them

Having contractions not only towards the end, but throughout the course of pregnancy, is quite normal, as long as they are not particularly painful or bothersome.

They are commonly called Braxton Hicks contractions, they are not painful, much less dangerous and - above all - they are irregular (and this distinguishes them from the pangs of labor and delivery).

This kind of discomfort that the expectant mother feels, sometimes as early as the fourth month of pregnancy, serve to prepare the uterus for the growth of the fetus.

The real pains, the ones that it is important to recognize, come towards the end of pregnancy, they are more intense and painful and, when they become regular, they warn that the woman is about to go into labor.

How to relieve pain

There are natural remedies, secrets, for relieve labor pains (as far as possible).

The first is, undoubtedly, to listen to your body and look for the best position, the one in which the pains seem to subside. Many women find relief in squatting on their side, others remain motionless and feel the need to lean against a wall, a support.

Relaxing your body and mind with a hot bath or shower can also be of great help.

If the pain persists and does not subside, it is good to hear from your trusted midwife who will be able to give you some personalized advice, based on the description of the symptoms.

As mentioned before, not all contractions are worrying and not all indicate imminent delivery. For this reason it is good to distinguish them and be able to recognize them the pains of labor, preparatory to childbirth.

If those of Braxton Hicks we talked about above are so-called "false labor" or "false contractions", those that warn that the birth is near are distinguishable by some symptoms:

Those that are felt during labor are also called prodromal contractions. In this phase, so-called kidney contractions, i.e. kidney pains, are also common. In this case the belly hardens, but the pain also reaches the kidneys causing intense back pain. Sometimes some women feel the kidney contractions at night, unable to sleep. This could be caused by the position taken by the child.

The duration of labor pains

Unlike the pangs of false labor, those of childbirth - as already mentioned - are regular and have a marked rhythm. Basically a pain thus occurs:

The intervals between one contraction and the next decrease more and more, but their duration increases. Pre-labor pains last between 30 and 40 seconds, but can even last up to the minute with shorter and shorter pauses.

When to go to the hospital?

It is not necessary to go to the hospital as soon as the pains arrive, but it is fine, stopwatch in hand (and here the partner has a fundamental role, since the mother does not have the clarity to be able to do it alone) check its regularity and duration.

Obviously this must also be evaluated with respect to the remoteness from the hospital or from the clinic where you are going to give birth. If it is far enough from the house, it is better to leave a little early.

To warn that the time has come to go to the hospital are also other symptoms: mucus mixed with blood on the panties, coming from the mouth of the uterus which, therefore, is starting to open and breakage of the water.

The hottest questions about pregnancy ❯

add a comment of The pains, what pain! What they are and how to recognize them