The phrases common to all parents 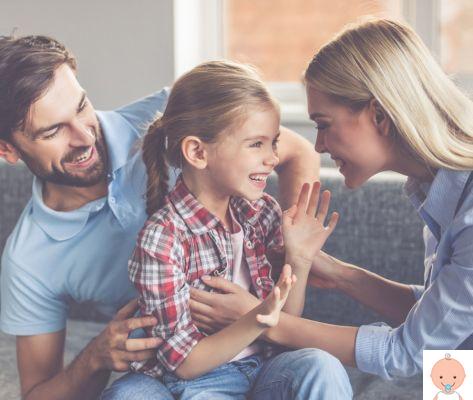 Repetitive sentences of the parents

When you become a mom and dad you often swear and perjury on the baby's onesie - especially if it's the first - that you will never, ever say the phrases that your parents used to rattle off while you were still just children. Yes, because you always think you know better than those who preceded us and you don't realize that, like it or not, il luggage that we carry with us it is also composed of experiences given by the family of origin.


There will therefore come a time when you will find yourself saying exactly the same phrases, in the same tone and even with the same words that Mom used if there was trouble. If genes are 50% determining, it is equally true that i Parents are set to standard phrases that are common to all. A sort of "Esperanto for parents" that is used in the most common situations of children's lives.

Read also: The rules for being patient parents

Mothers and fathers are also serial in their vocabulary: in that continuum represented by everyday life with their children, sooner or later surprising expressions emerge from their mouths. Many of you will have happened to say to her and a second later to think: “Oh no! I could have sworn that I would never have said this sentence! ”. Before being a parent, one is really naive.


Here then the common and most boring phrases that parents say at least once in their life to their children.

It doesn't matter if the child is 2 months old or 30 years old: the satisfaction of saying these words is priceless. Sometimes, in fact, their little ones are warned not to get in trouble and when they do - let's face it - there is a bit of satisfaction in observing that the results are exactly those predicted by that old fox mom or dad.

All parents are convinced that their children are gifted at 2 with an IQ worthy of a Mensa member (to be clear all those brains with an IQ Greater than Einstein). Who tells them that the progress made by their children actually represents a normal development of growth?

When this phrase is said, the children probably picture mum and dad cooking dragon legs in the Mesozoic, dressed only in skins. It is normal for parents to think back to the past as the Golden Age, but it is also equally true that they have to live in the present, that of their children, and remembering that they were better off before is not too reassuring, is it?

It is the expression par excellence used by parents to buy time. It is not known how much, however. That "we'll see" could mean: "we'll see if I'll buy you the video game by the time you are promoted" or "we'll see if we'll give you a tie on your fortieth birthday." In general, mum or dad still have to decide whether to take a position and hide behind an uncertainty - which they will pass on to their children as absolute firmness - to discuss a little more about what to do.

Well, if there is one thing that cannot be discussed, it is precisely this statement. A typical dialogue could be this:

There is nothing to be done: although educational principles always suggest explaining why a certain decision is made, sometimes parents are so exhausted that they find nothing better to say than to resort to their own authority. And the children just have to count what is left at the age of majority.

add a comment of The phrases common to all parents