The resumption of sexual relations after childbirth 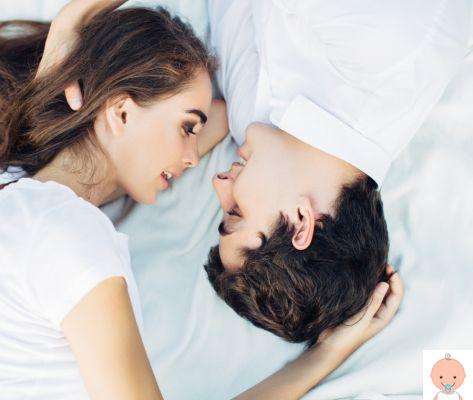 La resumption of post sexual intercourse childbirth is certainly one of the issues on which there is more insecurity on the part of women. The fear of infections, pain, blood ... in short, many topics that we will try to clarify starting from your questions on the forums.

The univocal solution that includes all women does not exist, neither in the scientific literature nor in my practical experience. There are various aspects that we must consider including the type of birth, the physical situation after the birth and the psychological-cognitive condition of the new mother. Let's say the main component on choosing the resumption of sexual intercourse after childbirth is definitely the psychological factor.

That is, it must be considered first of all that the birth was a great physical and emotional effort, not to mention the first days with the child where a total reorganization of one's life was necessary. For this reason, no woman I have ever met in my experience has ever thought about resuming intercourse before a month after giving birth, and I have met several. In addition to this factor of physical exertion, we must consider the fact that the experience of childbirth may have left physical and psychological scars in the woman (especially if the experience of childbirth is very different from what the woman and the couple had desired) and that these scars can inhibit sexual urge. The reason? Always the same hormones.

Sexual desire is purely hormonal, it is the brain that triggers it, but if at that moment the most important aspect is to heal those scars, then the hormonal cascade that leads to sexual arousal is not even triggered. We must not underestimate the male part of the couple as well. Even men after childbirth don't really know what to do. On the one hand, the desire to go back to being "the only man" of that new mother who has dedicated herself to the baby for 9 months and beyond pushes them towards the desire to have sexual intercourse. On the other hand we find the emotional effort that involved them during childbirth and returning home with the baby, the awareness of having to protect that creature and to dedicate oneself only to that. And hence the inhibition of sexual desire that could lead to a new pregnancy.

Instead, I would like to start analyzing the purely physical component of the resumption of sexual relations starting from the most physiological situation possible: natural birth without stitches. In this type of childbirth there are no real contraindications to the start of sexual activity from the day after the birth. Of course it is a little extreme as a position, let's say that most of the colleagues and gynecologists still recommend waiting for the gynecological check-up which is set at 40 days after the birth. Why this? In reality, the risk of infections is not increased, there are no stitches, but there are certainly lochiations or post-partum losses, or post-partum blood loss.

Having sexual intercourse during lochings is a bit like having sex during menstruation and this does not please the couple very much, or at least not always. Within the 40 days, however, the blood will gradually disappear to make way for yellowish losses and finally disappear completely. What can happen to the resumption of sexual intercourse is that there is a reduced vaginal sensitivity and consequently that the intercourse is not so pleasant. The basic reason is that the passage of the baby's head and body into the birth canal has stretched the muscles and nerve endings. So the virtual cavity that is normally the vagina does not adhere well to the penis, it remains, let's say, a little "enlarged" and the insensitivity of the local nerve plexuses do the rest. Quiet, however, is a situation that is resolved with time and practice.

I differentiated this type of birth from the previous one by identifying in this section all those spontaneous deliveries which, however, may have had lacerations or episiotomies which are then sutured. Here, too, the physical limit is set at at least 40 days. The motivation in this case is more related to the presence of sutures or small lacerations. Since sexual intercourse still creates microtraumas in the vaginal tissues, the lacerations could become inflamed and "reopen" as well as sutures could skip. In 40 days, however, the healing process began both in the case of spontaneous laceration and episiorraphy (suture of the episiotomy). What is important and what I want to say in this case where there are stitches is this: it is essential to take care of hygiene before and after intercourse even after the check-up visit. The scar takes a long time to become stable and a small bacterium is enough to cause vaginal infections that are rather annoying.

A separate discussion deserves a caesarean section. As everyone knows by now, this type of childbirth is a full-fledged surgery, complete with analgesia and / or anesthesia, surgical opening of the abdomen and suturing of the various layers that compose it. Here the timing is a little longer, even if it is not possible to quantify the exact time. It is usually recommended to wait the time necessary for the removal of the superficial points and for the keloid to form (the typical pink-white scar). To understand the reason for this prescription you have to think that this happened in your abdomen during the cesarean section: cutting the skin and appendages, moving the abdominal muscles, cutting the muscle fibers of the uterus. Everything is then stitched up (uterus and skin) and brought together (abdominal). Since we cannot see what happens under the skin, we take as a reference the state of healing of the external points, those that once removed leave the scar. The mechanical stresses and the displacement of the uterus during sexual intercourse can slow down and even (in the most extreme cases and honestly very rare) cause the detachment of one of the points with consequent loss of blood that is difficult to manage being internal. That is why to wait for the removal of the stitches and the formation of the initial stage of the external scar. In this way we are quite certain that the internal suture is also at the same stage of healing. In any case, especially following a caesarean section, gynecological evaluation is necessary before resuming sexual intercourse.

Some women report hearing much pain when sexual intercourse resumes after childbirth. I will try to explain in a simple way what happens and what are the main reasons for the pain. If on the one hand we have the anesthetized vaginal wall, the situation resolves over time. But it is not certain that when the numbness disappears, the muscles are back as they were before birth, indeed in many cases it is not at all. Then the solicitation of the sexual act leads to further stretching of the tendons and this causes pain. Not only that, sometimes the points of the various episiotomies are very deep and not yet completely reabsorbed when intercourse resumes; therefore it is possible that you feel a pull inside the vaginal wall or even just the skin and that this causes pain. The same goes for the internal points of a caesarean section. To solve this problem, a functional evaluation of the pelvic muscles can be made in order to understand the origin of the pain (from muscle strain or stitches) and what are the methods to solve it.

Read also: How to recover from childbirth

I would like to conclude by dedicating a small space to answering your forum questions regarding this topic. In addition to all that we have previously said about pain and the timing to start relationships again, there is a doubt that has struck me a lot and that we professionals sometimes underestimate: the fear of being changed, the fear that something has changed. In reality, something has actually changed, in the sense that a child with a head of about 10 centimeters in diameter has passed by. Or in the case of a caesarean I underwent abdominal surgery that changed me.

However, this does not mean that there is a condition of permanent change, a sort of "deformity" as is often imagined (and not only by future mothers, but also by fathers). Musculature and skin need the time necessary to return to normal trophism, that is to say, prior to pregnancy. It is estimated (but being an estimate it means that it can vary from woman to woman) that it takes the female body about 18 months to return to exactly the same shape and function as it was before pregnancy. It's a very long time but every day there will be improvements believe me.

Scar massages (both episiotomy and cesarean) and pelvic floor exercises aimed at sensitizing the vaginal wall in one case, and relaxing muscle tension in the other can also help. But only if it is possible to be evaluated and followed by an expert obstetrician or gynecologist otherwise they risk worsening the situation. The resumption of sexual relations after childbirth it is certainly a topic that touches the life of a woman, of a mother very deeply. Surely the doubts and fears will be there, they will never be exhausted, but it is important that you feel free to talk to your obstetrician or gynecologist. Whether it concerns the purely physical aspect, or rather that it concerns the emotional part more, because it must continue to be a good experience.

The choice of the name: rules to be respected ❯

add a comment of The resumption of sexual relations after childbirth