The role of grandparents in post-partum, expert advice 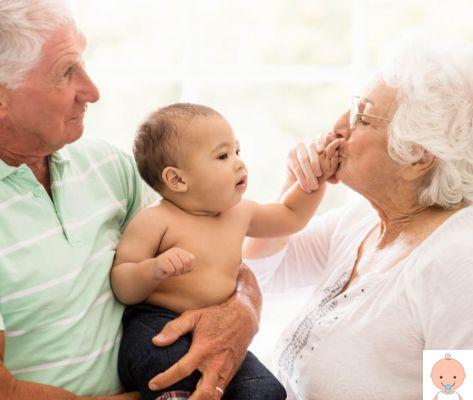 Role of grandparents in postpartum

However tall a tree may get, its leaves will always return to their roots when they fall. (Cit.)


I gladly start from this quote to deepen the role of grandparents as support figures in a delicate moment for one pair like post partum.

Pregnancy and postpartum are a particular period in a woman's life, whose physiological and hormonal changes - and experiences of a psychological nature - characterize and accompany this delicate phase: new mothers in this phase of the life cycle they redefine their female identity, relive the process of separation-identification from their mother which took place in childhood and experience a double identification with the mother and the fetus, being at the same time daughters of their mothers and mothers of their sons.

The birth of a child requires a process of adaptation which also involves and affects the new dad, in which reactivations related to one's childhood and processes of identification with the father figure take place. Some research has shown that taking on the new parenting role can reduce the degree of satisfaction and well-being perceived by the couple.

A question that often arises in pregnancy and more in postpartum concerns one's sense of adequacy and competence with respect to assuming the parental role: “will I be a good mother? Will I be able to understand the baby's signals? Will I be able to respond adequately? ". These are legitimate questions to which each mother will give a different answer depending on her personal experience and her self-esteem.

Read also: The educational role of grandparents in a child's life

A construct that allows us to answer this question is that relating to the "self-efficacy", That is to say how much the parents perceive themselves as capable of relating and behaving adequately with the child; a fairly high level of self-efficacy reduces postpartum stress levels.


When two individuals become parents, especially the first days after returning to the hospital, they are surrounded by numerous people: friends, acquaintances, but above all the various relatives can't wait to get to know the child. So the grandparents, the brothers, the uncles, are all around the new creature who has further enriched the family.

Everyone goes to great lengths advice and while these should be suggestions only, they often expect to be followed instantly and put into practice immediately and certainly the change of roles that maternity imposes on the couple has obvious implications also on the members of the extended family.

Becoming a grandparent today, it often involves clashing with great educational-generational changes; the grandparents grew up with more rigid indications on the training and care of children and educated on issues such as nutrition, sleep, weaning, which were at the center of great upheavals. Many of the pediatric medical indications have changed, we think of breastfeeding on demand, sleep strictly on the stomach or the tendency to pick up the baby if he cries to make him more self-confident.

Let us remember that the new mothers “of today” are also working moms, with rhythms and times very different from those of their mothers and grandmothers ... These new approaches to the child are enough to lay the foundations for 'friendly' discussions in the family! The grandparents will always suggest doing something different, the mother will want to follow the directions of the doctors or the books read during the nine months and this is enough to create some tension.


How to handle the situation

Advice is always welcome, but it must be constructive and should have the common purpose of safeguarding the newcomer and family peace of mind.

Even with a view to preventing post-partum depression, the non-judgmental and affectionate presence of a grandfather can certainly be defined as a protective factor that should not be underestimated.

At the same time the parents of the little one have to carry respect for grandparents who give advice only because they think it can be useful and communication is the only suitable tool to create or restore family serenity. No one can replace the mom and dad in the child's heart, but the figure of a grandfather is a privilege and a great resource that not all parents can enjoy; and the relationship between grandparents and grandchildren is a very important source of well-being in the emotional development of the child. Let's keep that in mind!

The importance of grandparents to children is absolute, but theirs is not an educational role. Parents need to educate and enforce the rules, while grandparents have a more relaxed role of cuddling and playing together. It is therefore very important that there is a dialogue between parents and grandparents to clarify the basis of the education that they prefer for the child, above all to respect it and not to create confusion.

Grandparents are not born but made

Following the birth of a grandson, a new role is assumed which cannot be improvised, but is the result of continuous education, with educational implications recognized for the role of grandfather. Grandparents are much more than parents tolerant, available for dialogue, sometimes accomplices, is a relationship that manifests itself in a free way, an end in itself, devoid of the educational concerns typical of parent-child relationship.

By becoming a grandparent you grow up in your own role as a parent, with the birth of the first grandson you start learning the role of grandparents and each one progressively develops his own personal way of being one.

When a "child" is born, "two parents" and "four grandparents" are born.

Becoming a parent means acquiring one new identity (we are no longer just spouses), and it is important that this new "role" is also recognized by those who until then were its exclusive custodians: their parents. These, in fact, now become grandparents but continue to be parents and spouses as well.

Depriving the child of closeness or of grandparents relationship it means depriving him of a part of himself that he will never be able to build except through the care and stories of those who, as parents of their parents, are an integral part of his identity.

It's on personality development the most effective contribution that grandparents give to their grandchildren through some special resources that help the little ones to grow up: attention, time, tenderness, joie de vivre, patience, love. To grow, the child does not need "things" but of ties: safeguard the memory of the family, transmit traditions, values ​​and knowledge. There are variables in the relationship between grandparents and grandchildren such as geographical proximity, age and health, culture, relationships, rules, gifts, difference between grandfather and grandmother, which can modify the stimuli to grow and open new horizons, which enrich experiences. of life. The intergenerational meetings they make the little ones grow and the elderly rejuvenate. Grandchildren represent a physical and intellectual stimulus for grandparents both for the activity with respect to their occurrence, and for the questions they ask to satisfy their desire for knowledge. It is proven that the elderly enjoy better health when they are in contact with young people.

Tips for being a good grandparent in post partum and after

curated by Maurizio Gnazzi, first obstetrician at the Santa Famiglia nursing home in the city

The yolk sac, what it is and when it is seen ❯

add a comment of The role of grandparents in post-partum, expert advice