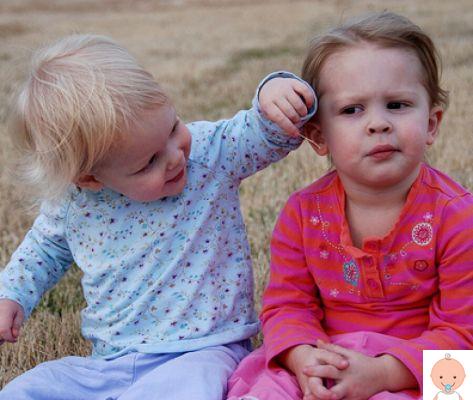 The beauty of the second child is that you already know what awaits you. The sleepless nights, the hunger screams, the colic.

You already know.
What you may not know is the emotion that goes to your stomach when you see the big one with his little brother. Because not even the great is really great. Yet he is. And above all, he feels he is. The sweetness that lies in his eyes when he looks at his little brother is indescribable. When he wants to pick him up. When he wants to console him from every cry.
I recommend the second child to everyone. Without being frightened by the idea of ​​fatigue, organizational difficulties or money that is always lacking.
Why, as far as the mess, the tiredness and the bad luck are concerned


two is equal that one

Even the mothers of our forum talk about it and compare each other. Here's what came up on the subject

"To have the second child or not?" (GO TO THE FORUM

Hi everyone, I'm in the 16th week, expecting my second child. The first came almost three years ago after two icsi, this surprisingly after only one report in the whole month !!! Honestly, I'm better now but I've cried a lot. I started trying big guilt feelings towards my baby: I'm afraid that he suffers that he no longer feels loved as before ...... did it happen to you too ??? Do you cheer me up a little?

I have only one puppy, and he is still very small, so I can't speak to you from experience, but I think some of these feelings of guilt are normal.
Surely hormones play their role in your state of mind, which with an ongoing pregnancy will be crazy!
But I don't think you should worry so much, I think a little jealousy between siblings is normal, but if you involve your little one in the new arrival, not making him feel "cast aside" but involved, and if you try not to change your attitude with him, any feelings of jealousy he may experience will certainly be mild and without consequences.
Anyway, both to let off steam and for some advice, maybe from someone who has been there unlike me, we are always here !!!


READ MORE: 12 truths no one told you about having a baby


Very optimistic from the height of his experience too Storm:
I'm sorry ke you're facing your second pregnancy without serenity..I am alessia's mother ke is 7 years old and miky ke is 21 months ex as far as I'm concerned i can assure you ke alessia has always wanted a little brother (Read) and I have always made her participate in the preparations and I have always made her feel important to me and she has never been jealous ... now ke miky has grown up every now and then they argue because the little one is very lively and takes his things from him but, for luck lasts very hard ... I advise you to live this period peacefully so you will transmit tranquility to your little one and make him participate in the arrival of his little brother ... good luck!

Also Giuvi brings a nice experience to the debate:
I understand you perfectly. The same, identical thing happened to me. My first child is 3 and a half years old, while my second child is 9 months old. You think that I was looking for this second pregnancy, but I was very tormented, I wondered what it could mean for my Giulia. So when I took the test and it came back positive, I burst into tears, I was desperate. My state lasted for almost 3 months. I felt like a worm both towards Giulia and towards the creature I was carrying in my womb.
I was madly afraid of ruining my relationship with the first child, I thought it would never be the same again, that she would "hate" me for having deprived her of her balance, etc., etc., etc.
Moreover, I was very afraid of his reaction in the face of the postponement of the days of hospitalization.
In short, the ration was by both of us, it gripped my heart to see her go away, after the visit, with her face dazed, in an attempt to hold back the tears.
But I feel like reassuring you, because then everything went perfectly.
Giulia is fine, she still has a lot of attention, she loves her little sister and our family has a new balance.
Now, that Viola is growing up, Giulia feels her more and more hers and this moves me and makes me think that the anxieties and bad thoughts of the past didn't have much foundation.

Here is also the experience of machi, mother of two girls
I have 2 girls Martina of 5 years and Chiara of 2 months and for me it was very important to explain to the great that the little sister, who among other things she wanted, would have absorbed a lot of the attention of the mother as she absorbed them when she was small. Throughout the pregnancy I explained to her that love for children does not divide, but multiplies, I took her with me when I did the ultrasound to make her visualize her sister in some way, in short, I started to prepare her for this new presence right away.
Now that Chiara is there I always try to be careful, if I give Chiara a basin I also give one to Martina, when Chiara sleeps cuddly a little Martina, if Martina talks to me I always pay attention to her, even if I breastfeed or change her diaper to Chiara, I try to involve her in what I do with her sister, for example if I change her I pretend to forget the cream or something else to send her ...
Since her sister was born, the only change in Martina has been the fact that she no longer wants to go to school because she has to help me, but this too seems to be resolving because she told me she wants to go back.
I hope I have helped you and cheered you up

Also Ninetta82 she is expecting her second child and writes:


hello natashia, I too am expecting my second baby, and for me too it is an unscheduled pregnancy ... For me too the first thought went to my baby, how jealous he would be and how much he would suffer, because he he is a great mammon, and every time he was asked if he wanted a little brother or a little sister he would yell no ...
among other things, I have a brother of 2 and a half years younger than me, and I still remember how jealous she was, despite all my mother's attempts ...
But day after day the love for this child that I carry has grown, and I have begun to think about the positive aspects, the games they could have played together, and the fact that a brother or a sister in most cases are indispensable people who they stay with you all your life ...
I wish you all the best and give you some advice, we are probably more sick than them, and then the happiness of our puppies depends on our serenity ... the important thing will be to take into consideration that jealousy is an inevitable feeling, our task. is to be able to help them contain it ...
kisses

You can read all the experiences of the mothers of our forum here and write your own experience that will be useful to many mothers
Audio Video The second child arrives: happiness or dismay?
Nursery: here are the alternative solutions for the little ones ❯

add a comment of The second child arrives: happiness or dismay?