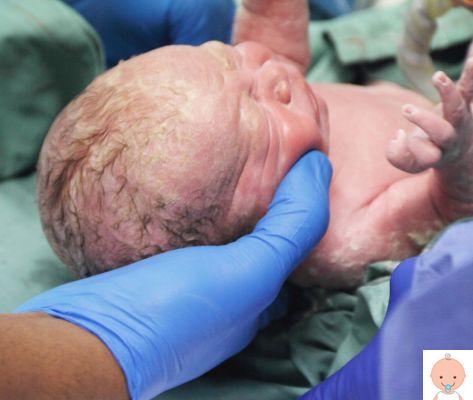 I had lost my mother 5 months before giving birth. I had taken the preparatory course in the hospital chosen to give birth, complete with a visit to possibly do theepidural. The doctor touched me where it should have been done and I snapped, he told me I couldn't do such a thing at the birth and dismissed me with "You will be so motivated that you will stay still".


I had hemorrhoids that had tortured me for two months and that afternoon again in crisis I sought relief in a warm bath. As soon as I got out of bed I became aware of lose a pinkish liquid. I was alone in the house. The waters had broken. I got everything ready after calling my husband. I rushed to the hospital where they immediately told me that the bag was broken but no dilation. They added that they had no room and would transfer me to another hospital. When they arrived to my immense disappointment in the new hospital, they advised me that 6 hours had passed since the sack was broken I probably would have started having contractions at night. And if they hadn't started, they would have prompted me to give birth. So that I can still have a natural birth.

He arrived the next morning and nothing! At 8 they began antibiotic therapy and first induction with tape, convinced that labor would soon start ... but nothing. The next morning, despite the constant monitoring and my complaints about the liquid that kept coming out, they didn't want to give me a caesarean. At 12 they make me there second induction this time with drip; sure that even there it would not take much. At 16, 48 hours had passed since the rupture of the bag, I asked for a cesarean again and they told me that it was not the practice.

Read also: Cesarean delivery on request: is it possible to do it?

At 18 another drip of oxytocin... the absurd pains arrive, but I was happy because I thought that finally something was moving. At 20 pm they visit me convinced that by now there would have been a good dilation for the epidural. The uterus was not even flattened, my daughter was not channeled, there was no dilation. In a panic I was praying because by now I thought I was one of those cases that the news finally talks about ... with a woman who goes to the hospital to give birth and finds herself living the tragedy.

After 52 hours they realize that my body has set nothing in motion to give birth except the broken sac. Emergency caesarean delivery ... 3 spinal attempts that don't work. Yes, that's right: he didn't take anesthesia. At the fourth time we are, I lie down ... I am about to meet my daughter. A relief. But ... Scream that I hear ... I feel they cut me. At first they don't believe me and in the meantime they start to puncture the sides of the cut and I tell them that I keep hearing. At that point they realize it's true and go for general anesthesia.

My daughter was born at 22 ... 54 hours after the sack breaking and I was so exhausted and scared that I only saw her the next day late in the morning. I wondered why all that pain and I cried because I didn't even see my daughter born.

4 days later we went out safe and sound. I have never cried with happiness like that day. I was mom. My daughter was healthy and apart from the difficulties of the cut, I was fine too. A week later I make an incredible discovery. My daughter was born with the funicular node, I had to search the internet to figure out what it was. The funicular knot is the leading cause of death of babies during childbirth.

She went through 3 inductions. She has never channeled. She didn't want to get out of there. It was too dangerous. There it was all clear to me, I understood that my mother who had only been able to see her in the belly had protected her. My daughter changed my life. She made it wonderful. Every time I look at her I think she looks so much like her grandmother that I earned my piece of Heaven with her.