The things you inherit from a strong mom 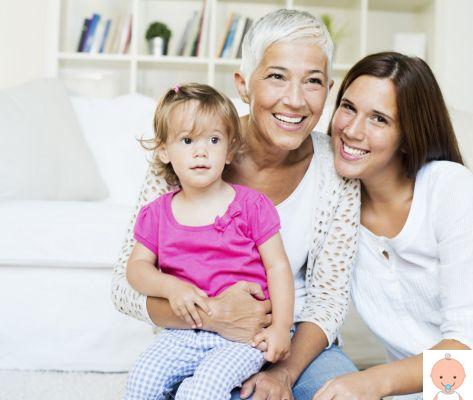 Having a strong mom

When you have preschool children, you are so immersed in your role as a mother that you often forget that you are a daughter. Now you are the one who takes care of others, yet, if you are lucky, your mother is always next to you: and here Mother's Day is an opportunity to rethink how the relationship with those who generated you has evolved. , and to all the reasons why even today (or perhaps, especially today) it is worth stopping and saying thank you.


What kind of mom do you have? Mine is the “no frills” model. She says what she thinks without fear of being inappropriate and unpopular: she is capable of being sarcastic even when you step out of the way. delivery room and has the air of a career general. Her attitude to lead her can be almost as irritating as her distinct impression that only her opinion of her is worthy of consideration in her eyes: in short, anyone who doesn't think like you is an idiot. It goes without saying that we slaughter on a regular basis, and just as regularly we make up. It never happened that he turned his back on me in his famous time of need: he is always on my side and continues to support me even as he loudly repeats that I am committing an idiocy.

Read also: How much of our mother is there in our being mothers?

She is strong and courageous like no one else I have ever known; the harsh trials that her life has reserved for her have never bent her. Although she has made some embarrassing parenting slips, when there was need he fought for us children like a tiger, and I suspect he will continue to do so until his last breath. Here are the most important things he taught me.


My mother is unbearable. But if you can get beyond the superficial layer of detestability, you have everything to gain, because she is a person who has a lot to give to others.. So, even in other people I have learned to look at the substance: some of my best friends are women who apparently have nothing to do with me and with whom I don't get along on anything. But I respect them.

For my mother, only your rules apply in your life, no matter if they are different from what most people expect. Raised by such a woman, when I see someone give up because those around him disagree, I always have the doubt that it is not flexibility but cowardice.

Even superheroes sometimes need to let off steam with a good cry: my mom is proof of that. She has an incredibly easy tear, but after half an hour she is already thinking of something else, fierce as ever.

Of all the people I know, my mother is the one who has had to endure the heaviest trials in life. But when she wakes up, it is enough for her to see that the sun is outside her or to hear one of her favorite songs about her on her radio that she immediately gets excited like a child. With her all things seem to come to life; every little pleasure must be savored, even if it happens in the middle of a bad day. For me this is being special: nothing, no one has been able to steal the blue of its sky.


My mom and dad met when she was little more than a child. After more than fifty years he has never taken it for granted, because he "knows that despite everything, at any moment I would be able to take my purse and leave."

If a person hurts you knowingly and gratuitously (but also not) no contract requires you to forgive him within a certain period of time. Some people are worthy of forgiveness, some are not, or it may even be that you just don't care anymore. Once again: my life, my rules.

My mum has always been damned proud of her successes and also of her beauty when she was young: she never hid it, he never tried to minimize whether he excelled in anything compared to my father. And above all, your success doesn't take anything away from your children She realized that as a mother she made more money by continuing to work instead of staying at home: she is still convinced of it and likes to talk about how much she loved her profession and how well she did it. not to give it up.

For my mother, envy is simply a feeling that makes no sense: a great waste of time and energy. In her life some people have cut her off out of envy only; she accepted it, but she didn't understand.

After 70 my mom starts wondering what to organize for the weekend on Thursdays. And even when she can't be out of town for a couple of days, Saturday nights at home just don't exist.

Things to know if your partner is pregnant ❯