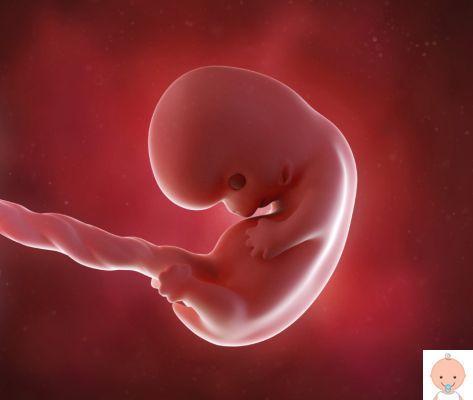 Umbilical cord when it forms

A rough stump forms as early as the fifth week, but then over the next few weeks it stretches and develops. In the mid of second month has reached its extension and by the end of the first quarter it has now achieved its full functionality.


The umbilical cord is made up of two umbilical arteries, the umbilical vein covered with a gelatinous substance (Wharton's jelly).

It measures an average of 50 to 60 centimeters but there are both shorter and longer cords (up to one and a half meters). The average thickness of the cord ranges from 1,5 to 2 centimeters. It consists largely of the cells of the amnion, that is one of the membranes that cover the child. At each end of the cord, the amnion that forms the sheath of the same, is confused on the side of the fetus with the skin of the abdomen and on the side of the placenta with the amnion with the amnion covering the placenta itself.

The cord is solid and very elastic, in fact it is able to withstand tractions from 5 to 6 kg and can hardly be compressed (otherwise it would risk blocking the blood transport). Since the cord is so elastic, the fetus can make all possible movements.

The blood contained within it at the time of birth plays a very important role in the extraction of stamina cells (hematopoietic) adults.

Umbilical cord when it falls

After the birth of the baby, the cut of the cord definitively breaks the bonds between the mother's circulation and that of the baby, who becomes autonomous. But the circulation of the cord it stops by itself because the arteries contract, so in a short time even if you cut the cord without tying it, no blood would come out. Cutting the cord does not interrupt the exchanges but the cord itself stops working by itself.

Read also: Childbirth, the umbilical cord loops around the newborn

Immediately after birth, the umbilical cord, which has the appearance of a round and gelatinous stem and a white-mother-of-pearl complexion, is cut to about 8/10 cm. and closed with a rubber band or with a plastic clip, then wrapped with a dry sterile gauze.

After the cord is cut, the umbilical vessels are thrombosed rapidly and the stump of the funiculus, no longer sprayed by the vessels, dries up taking on a blackish-brown color. Normally the stump comes off and falls around the 5th / 10th day of life

The childbirth preparation course: which one to choose and what it is for ❯