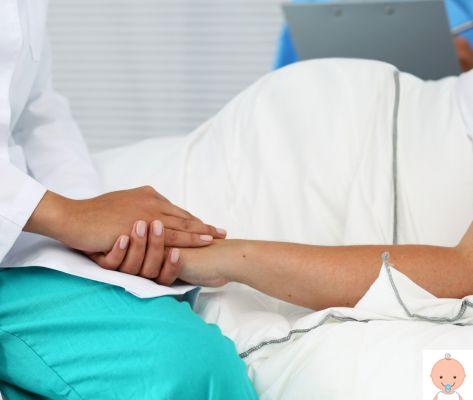 There are methods that are used in the hospital to help go into labor faster. One of these is the administration of oxytocin directly into the vein. Having said this, it may seem like a positive thing but be careful, if used disproportionately it can also cause serious damage. Let's try to understand which are the cases in which the use of oxytocin is useful and which ones in which it is not.

First of all what is oxytocin?

Oxytocin is a hormone that our body produces by itself. It is in fact produced in the brain, by the pituitary gland (the pituitary gland) and sent into the circulation through the blood. When the time has come foronset of labor oxytocin production increases and contractions appear. As labor continues, the production of oxytocin increases, and therefore the contractions become more intense and more frequent until the time of delivery. The one that is given directly into a vein during labor is one synthetic form, a drug that is similar to the oxytocin we produce in the pituitary (also called endogenous) and is capable of mimicking and enhancing its effects on the uterus.

From what has already been said you can imagine what the purpose for which it is administered may be. When labor begins, then slows to near stop, or continues very slowly, the uterus may need an extra boost. A very very light dose controlled by an infusion pump (a machine that drops one drop of the drug into your blood at a time) of synthetic oxytocin can wake up the uterus and therefore speed up labor.

Beware though that adding doses of synthetic oxytocin is not always good. Let me explain better, there are also negative implications in the administration that must be well known and considered. A higher dose of oxytocin causes the uterus to contract more and more intensely, therefore the pain of contractions increases exponentially immediately without giving the body time to get used to it. Furthermore, prolonged and high-dose administration ofsynthetic hormone it can stress the uterus muscle so much that at some point it totally stops contracting e becomes atonic. A bit like when after intense physical activity the muscles of your legs or arms no longer react and you even struggle to walk. This condition inevitably leads to a delivery by caesarean section.

How to get contractions: all methods

How to stimulate contractions? Here are some methods, real and otherwise

Finally, you have to think that the uterus is not empty. I mean inside the womb is the baby who gets oxygen and nourishment from the placenta, which in turn is attached to the womb. When the uterus contracts, the vessels of the placenta tighten and the baby gets less blood than normal. You can therefore understand that a long and intense administration of oxytocin causes the uterus to contract longer it can harm the baby, a fetal suffering which involves performing an emergency caesarean section. What we have said so far has been confirmed in a recent study published by the Journal Of Obstetric and Gynecology (important scientific journal in the gynecology and obstetrics sector) in which the use of synthetic oxytocin was tested in different groups of women (first child, with other children already, with children born by caesarean section). The results confirm that only in the group of women without children with a very ineffective uterus does synthetic oxytocin produce good results, in all other cases it is either useless (in the case of women with children) or even increases the risks.

But you can rest assured, if until a few years ago the use of this drug was quite indiscriminate, today it is no longer the case. The hospital protocols have been updated and more cautious use is made of it in almost all structures.

So what to do?

First ask for information. You or those accompanying you are authorized to ask what they are giving you and for what reason. You can also ask to start with the minimum administration and to reduce or suspend thesynthetic oxytocin once labor is well underway. Don't be afraid to be seen as asking too many questions. It is about your and your baby's well-being. Methods that can help reduce the otherwise infinitely long and exhausting labor times are welcome. But, like any drug, we must avoid abusing it, otherwise serious harmful effects that can make a peaceful birth a sudden urgency.

add a comment of The use of synthetic oxytocin in labor