The Valentine's Day to tell the children 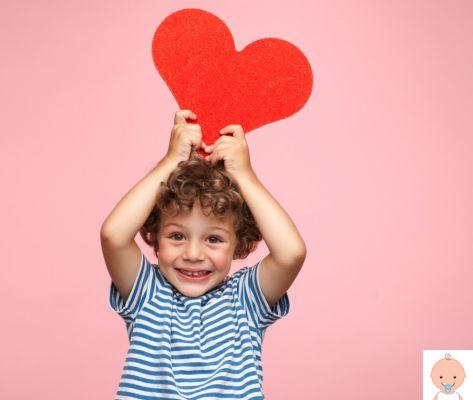 The opinions of the experts are conflicting and there is no certain historical evidence. We can, however, try to reconstruct the origins of Valentine's day, Valentine's day, without forgetting to take a look at the legends of love most famous related to this festival.

The story of the Valentine's Day

Valentine's Day seems to have been born in Roman times at the behest of Church. Throughout the month of February, which represented a period of rebirth and purification in view of the dawn of spring, the Romans celebrated a pagan ritual for fertility.

The celebrations and rites took place in the name of god Lupercus: the priests (called Luperici) went to the cave where it was said that the she-wolf had suckled Romulus and Remus and performed rites and sacrifices, the blood of the animals was shed through the streets of the city and a sort of Refuge of love: a child randomly extracted the names of a man and a woman who were called to live in intimacy for a year in order to perform the fertility rite. With the advent of Christianity everything began to change and there were many struggles that Christians fought at pagan festivals and rites. Pope Gelasius, in 496 AD, canceled the festival of the Lupercals and instituted, for February 14, the valentines day worship.

He was a bishop born in Terni (city of which he is still the patron saint today) who had dedicated, in the second century AD, his life to his city which was the scene of terrible persecutions against the followers of Jesus. He was proclaimed a saint in 197 AD by Pope San Feliciano and patron of lovers because, it is said, that he was the first to have celebrated the union between a pagan legionary and a young Christian woman.

On the end of life on Valentine's Day exist two distinct versions. The first wants that he was imprisoned and stoned, far from his city, at the behest of the emperor Aureliano who started persecutions against Christians; the second version, on the other hand, tells that Saint Valentine had tried to convert the emperor Claudius II and that the latter had imprisoned and beheaded him.

But the “pink” details are not lacking at the story of the saint: someone claims that, during his imprisonment, he fell in love with the blind daughter of his jailer, Asterius, who thanks to his faith restored the young woman's sight and that, before being beheaded, he sent his beloved a signed farewell note "from your Valentine".

A phrase that has entered the collective imagination of the whole world and which is still widely used today to indicate a person who is truly in love.

Stories and legends of Valentine's Day for children

Over the centuries, numerous have been born around San Valentino legends and stories. We tell a few.

Here is some useful information to learn more.

The nursery rhyme of Valentine's Day

The "Nursery Rhyme of San Valentino" by Mimmo Mòllica is dedicated to the day oflove. Telling young people about this feeling requires the right words, but a model is also needed to help them deal with it without unnecessary anxieties or insecurities. Here it is in podcast version.

The end of childbirth: the afterbirth ❯

add a comment of The Valentine's Day to tell the children