The yolk sac, what it is and when it is seen 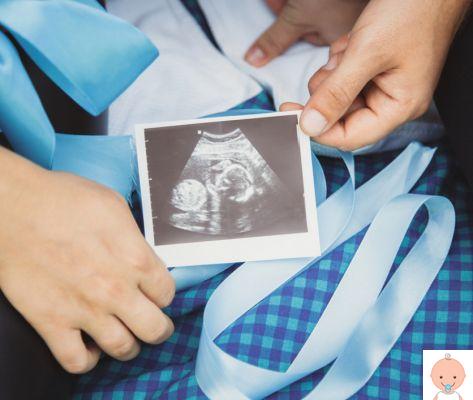 When we do the first ultrasound it is possible that the embryo is not seen yet or that a small dot and the yolk sac next to. Let's see what it is and what it is for.

What is the yolk sac

It is the first visible element in the gestational sac during pregnancy, usually around 5 weeks of gestation. It is filled with fluid, yolk fluid, which can also be used in the very first weeks for the nourishment of the embryo.


At the end of the fourth week the yolk sac can be described as an open pear-shaped blister in the digestive tract with a long, narrow tube, the yolk duct.

The yolk sac it begins to form during the second week of the embryo's life and goes through three stages of growth and subsequent modifications:

When you see the yolk sac


In this first phase the embryo is in theamnion, a kind of membranous sac surrounds and protects the embryo. The amnion is initially in contact with the body of the embryo then increases in volume with the production and accumulation of amniotic fluid. The embryo is suspended in its interior through the umbilical cord.

By increasing the amniotic fluid, the expansion of the amnios increases until it adheres to the inner surface of the uterine cavity.

Il yolk sac, as we said, it is a fundamental element for the growth of the embryo in the uterus in the first weeks of gestation. Generally, therefore, it is one of the main elements that are seen during the first ultrasound together with the gestational chamber. It can be said that a pregnancy in progress can be confirmed precisely by the presence of the yolk sac inside the gestational chamber, intended to house the baby.

Yolk sac when it disappears

The yolk sac begins to to grow up already two weeks after conception and then grows progressively week after week. Between the ninth and tenth week starts at degeneracy and then disappears around the twelfth week gestation, when the placenta is ready to guarantee the embryo all the nourishment it needs.

During the first ultrasound the operator is great at identifying the yolk sac and understanding if there are any anomalies (for example, it has irregular edges, or if it is larger or smaller than the norm or whether or not there is an embryo). These are important assessments that are used by the doctor to understand how the pregnancy began, if it is a twin pregnancy and if everything is going well.

During the ultrasound it may happen that the operator is able to identify the yolk sac but the embryo is not present, what does that mean? The causes can be basically two:

What do you do in these cases? You wait a few days to repeat the ultrasound to understand if the embryo is present and you can do the Beta tests to evaluate their growth (if they are still it means that the pregnancy is interrupted).

It may happen that during the first ultrasound check the embryo measurements are disproportionate to those of the yolk sac, which is larger than average. What does it mean? This is not a positive figure, it often indicates an increase of chromosomal and syndromic risk and abortion. The advice, which will certainly also be given by the gynecologist, is to repeat the ultrasound after a few days or to quickly perform an advanced level transvaginal ultrasound that allows you to have a clearer picture of the situation.

In some cases the yolk sac turns out to be idropico, that is, swollen with fluids, which in most cases is linked to an abortion.

The second birth: tips to get prepared ❯

add a comment of The yolk sac, what it is and when it is seen