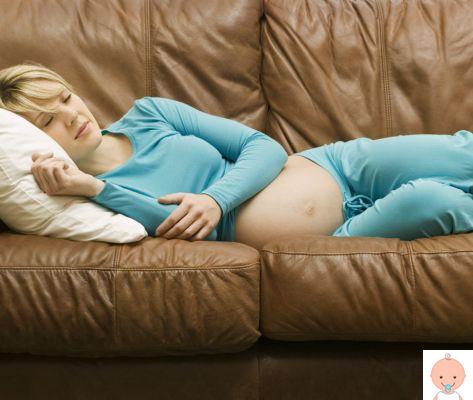 During pregnancy, some rather frequent ailments may occur.

Pregnancy is an event that involves and changes the whole body of the woman. The changes affecting various organs of the body can sometimes manifest themselves through small ailments that in some cases accompany the expectant mother during all nine months of pregnancy but only rarely do they translate into real ailments.
Among the most common ailments are nausea and vomiting which in turn are the main cause of sialorrhea, i.e. excessive secretion of saliva.

Saliva is produced by the salivary glands of the mouth which, under normal conditions, secrete a quantity of one and a half liters per day. It has numerous functions including that of dissolving soluble foods, promoting swallowing, making chewed foods slimy and starting the digestive processes of sugars.
Sialorrhea in pregnancy is a disorder that directly depends on nausea and with it occurs from the first weeks of pregnancy and usually disappears around the third month. Often this condition occurs in conjunction with the ptialism, i.e. the difficulty in swallowing which occurs when the amount of saliva becomes excessive.
In turn, the difficulty in swallowing the saliva produced by the ease of vomiting is the cause of abundant salivation.

Ptyalism, which therefore often constitutes both the cause and the consequence of drooling, hypersalivation, nausea and vomiting, are probably disorders caused by a hormone secreted by the placenta, the chorionic gonadotropin (HCG) that is the hormone that is dosed in pregnancy tests. They would therefore be more intense in the periods of greatest concentration of the HCG hormone, ie during the first three months of pregnancy when there is a greater stimulation exerted by the pregnancy hormones on the salivary glands. In addition, these disorders can occur following inflammation of the mouth (stomatitis and gingivitis), pain in the teeth and / or dental caries or even due to the psychological changes that early pregnancy can cause. These events are frequent in the first months of pregnancy because they are favored by the new hormonal situation.

It must be said that not all women suffer from hypersalivation in the early stages of pregnancy; it is estimated that only 5% suffer from it, and it is in any case a disorder that in most cases disappears spontaneously by the end of the fourth month at the latest.
Small tricks like eating fresh yogurt, chewing on candies, cookies or a log of licorice; drinking cool drinks can help counteract this disorder and alleviate its effects

During pregnancy, many organic functions undergo alterations that allow the body to adapt to the new condition. The gastro-intestinal system is one of those most affected by these changes: the balance and functions change and one of the most frequent disorders during gestation is constipation (constipation), which can be caused by the increase in water requirement of the maternal organism, by any vomiting or by the pressure that the uterus exerts on the colon as it grows. Increased progesterone can also promote constipation. It is very important to treat or even better to prevent this disorder which can have negative repercussions on the health of the expectant mother, even after pregnancy, and indirectly cause damage to the fetus as well.
A pathology that is often associated with constipation is alteration of the intestinal bacterial flora which, due to slow intestinal transit and stagnation of stool in the rectal ampulla, can cause intestinal infections and infections of the urinary and genital tract which must be treated with antibiotic therapies that could harm the fetus. Furthermore, constipation, due to the increased evacuation effort it entails and the increase in blood flow, can cause hemorrhoids and fissures.
One of the most effective remedies to counter this ailment is the use of dietary fiber associated with a high water intake; on the contrary, the following are to be avoided:

oily laxatives (petroleum jelly, paraffin oils) because they prevent the absorption of fat-soluble vitamins (ADEK) which are extremely important in pregnancy.

It is important that the future mother's diet is rich in cooked and raw vegetables and it is preferable to replace white bread with wholemeal or bran bread. However, increasing the intake of fiber in the diet is not always so easy: in fact, to reach the amount of fiber necessary to ensure proper functioning of the intestinal functions, it is necessary to take large quantities of vegetables that are not always appreciated. Furthermore, some fibers, especially non-soluble ones such as bran, reduce the absorption of important trace elements and minerals from the intestine and can even aggravate constipation. It is therefore important to prefer soluble fibers such as glucomannan. Another simple remedy for constipation it is making movement: for example, walking for half an hour a day helps to regulate bowel functions and blood circulation.

Among the disorders related to pregnancy, aerophagia and heartburn are not uncommon. Aerophagia is due to excessive ingestion of air that accumulates in the digestive system and can create small problems, such as abdominal pain, or real pathologies. The ingestion of air normally occurs with food, liquids and the swallowing of saliva in an amount equal to 2-3 ml of air per swallow, but when this amount becomes excessive there is something wrong. In pregnancy, this disorder is caused by physiological causes linked to the changes the maternal organism undergoes to accommodate the fetus. In particular, aerophagia during gestation is caused by hormonal changes and by pressure the fetus exerts on the digestive system of the mother.

Another disorder that affects the digestive system is the stomach ache which occurs when gastric contents flow back into the esophagus and manifest as a heartburn in the pit of the stomach or behind the breastbone.
In pregnancy, this disorder is caused by intra-abdominal pressure due to the growth of the uterus and is generally felt more when bending over or lying down. Also due to the growth of the uterus they can be had difficulty digesting certain foods. To limit this disorder it is necessary to assume a correct position and avoid those foods that can increase the production of acidity in the stomach, such as foods that are too high in fat, those that ferment such as cabbage and dried legumes and foods that are difficult to digest such as meats in humid. Grilled meat, fish, well-cooked vegetables and fruit are preferred. To prevent or otherwise alleviate this disorder, the following may also be useful:

Even if these measures are not very effective against heartburn and the discomfort remains very pronounced, they can take sodium-free antacids which are not contraindicated in pregnancy

Train, a comfortable and… fascinating journey for children ❯