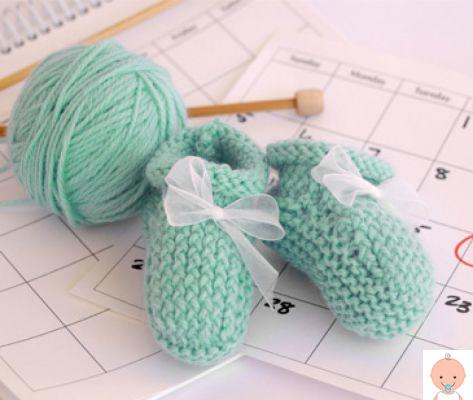 The birth of a child is an extraordinary event, capable of bringing a joy to a family that words often fail to express. The birth event has always been accompanied by traditions, beliefs and uses that may vary according to the various geographical areas but they are nevertheless linked by the common purpose of celebrating the birth in the best way wishing the little one luck and serenity.

It must be said that in the past, especially in small towns and rural areas, the tendency to superstition was very rooted therefore all important life events, such as pregnancy, childbirth or baptism, were marked by beliefs and traditions. very particular, some decidedly imaginative or bizarre, which in modern culture have almost completely disappeared.
In the past, for example, in some geographical areas it was believed that immediately after giving birth, the baby and his mother were very vulnerable and could be influenced by dark forces. To remedy this, they resorted to the use of amulets and magical objects that had the power to ward off misfortune and bad luck.
According to the various traditions, there are then actions to be avoided because they bring bad luck. A popular belief for example wants the baby never to be kissed on the neck, because in this case he could lose sleep. Many popular beliefs, however, have a positive purpose, namely to wish luck and prosperity to the creature who has just entered life.
Pregnancy, 20 Things You Should Know First

One of the traditions that has resisted the passage of time and the social and cultural changes of our times is that which concerns the little shirt of luck, a tiny tunic in cotton or silk, to be worn by the baby immediately after birth. The little shirt, to bring good luck, must be given by someone and then kept as a souvenir, according to some beliefs, without being washed. This tradition originates from the fact that, especially in the past, the newborn layette included a series of silk or cotton shirts to be used in the first days of life to prevent the baby's delicate skin from coming into contact with fabrics that could cause irritation or allergies. .
Today, mothers-to-be, in preparing the necessary changes for hospitalization or in the clinic immediately after childbirth, almost always prefer to use leotards, which are more comfortable and have a better fit. Lucky shirts can be bought in children's clothing stores, they come in various colors but the most popular are white and red.
Generally the little shirt is given to the future mother after the 3rd month of pregnancy.
Another tradition linked to the birth is that of fortune bath which consists in putting in the water of the first bath a gold coin to wish the little one luck and prosperity. For the first bath, in the past, it was also used to immerse in the water of walnut leaves or add some wine with the aim of purifying and invigorating the little one.

After birth, the baby's first major event is the baptismo, an event of great importance for families of the Catholic faith.


As with any other important "stage" in life, customs and traditions also revolve around baptism aimed at giving a particular meaning to the event. In the past, tradition wanted the child to come baptized within eight days of birth so that he could become part of the community of the Church as soon as possible.
Very important was the choice of the godfather and the godmother who chose a name for the little one and played a very important role in his growth and formation. In religious communities, baptism is still considered a very important stage in life even if many of the habits of the past linked to this event are disappearing.

Tradition also establishes some "obligatory" gifts that are still given today on the occasion of baptism; among these is the gold chain which must be combined with a medal with a sacred image that is usually given as a gift by godfather and godmother. Other traditional gifts are the bracelet engraved with the name and date of birth of the child or the pin for the bib. These objects somehow replace the amulets that in the past are given to the newborn and his family as a wish for a peaceful and happy life.
Birthmarks in pregnancy: how much is it true? ❯