Tubal abortion: how does it happen and what are the most frequent symptoms? 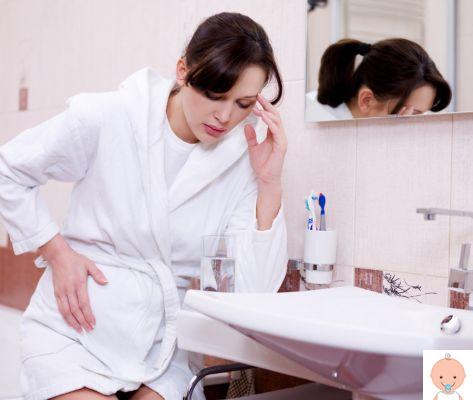 Among the various types of spontaneous abortion that a woman can face there is a rather particular one, tubal abortion. I would like to analyze this unfortunately unfortunate event with you to better clarify what it is, if any causes, symptoms and consequences.

What is tubal abortion

As we all know, fertilization takes place in the tube, very close to the ovary from which, in the fertile period, the egg ready to be fertilized by the spermatozoon is released. This particular type of abortion occurs when an extrauterine and in particular tubal pregnancy is established. The pregnancy clearly cannot proceed, for reasons that we will see later, and consequently a real spontaneous abortion occurs. The fact that it is called tubal is related only to the localization of pregnancy.

What are the causes of tubal abortion

To explain this you have to imagine that, from the moment of fertilization, the egg needs nourishment and growth. And for both of these needs the tuba is neither equipped nor suitable. A tubal pregnancy on average lasts from 6 to 8 weeks of gestation, because beyond that it is no longer able to satisfy the demands of the oocyte (the oocyte is, to be clear, the fertilized ovum that grows but which by scientific definition cannot yet be considered embryo).


However, there were extreme cases where the pregnancy continued until the 14th week.

But why does abortion occur?

So let's start with the anatomy of the tuba to answer the question. It is a small tube, the walls of which consist of three layers: external epithelial, central muscle and internal serous / mucous membrane. Through these three layers flow numerous blood vessels between veins and arteries that supply the genital organs. Since our small fertilized egg implants itself in this environment, it needs nourishment and space to grow. The first takes it literally by invading the blood vessels of the tube, the second by dilating the walls of the tube. Now you can understand well that the tube is not as thick as the uterus and the vessels are much smaller.

So the mechanisms the causes for which abortion occurs are essentially two:

In both cases, the detached egg can remain in the tube cavity surrounded by layers of blood clot. While the bleeding from the tube "drips" into the abdominal cavity, sometimes causing abdominal pain.

Unfortunately the symptoms associated with the ectopic pregnancy before and atsubsequent tubal abortion, they are not many and are so non-specific and generic that they can be easily confused with other conditions. In particular the confusion can often be made with pregnancy regularly implanted in the uterus. This is because the symptoms include: period delay, nausea, vomiting, mild blood loss and mild abdominal pain. Therefore, in cases of tubal abortion, many times one cannot rely only on such mild symptoms to diagnose ectopic pregnancy first and then tubal abortion.

On the other hand, there are cases in which i abdominal pains are quite severe, also associated with corresponding shoulder pain. This is the main alarm bell, based on the symptoms, which requires us to investigate with instrumental examinations such as beta-hcg and transvaginal ultrasound. Curious is the corresponding shoulder pain, it is due to the pouring of blood into the abdominal cavity I mentioned earlier. The blood also drips slowly, but once a certain amount has been collected it compresses the nerve endings that cause the painful sensation in the shoulder.

As I have already explained other times, the value of the beta-hCG alone cannot be used to do either the dating of pregnancy or, as in this case, to do miscarriage diagnosis. We can say that basically in an ectopic pregnancy that is evolving towards a tubal abortion beta-hCGs grow very very slowly compared to a pregnancy that started in the womb. If, for example, in a physiological pregnancy the typical growth is doubled after three days, this does not happen for an ectopic pregnancy. The main reason is that, as we have said, the embryo has no way to grow. On the other hand, when an abortion is imminent or has occurred, the exact opposite happens.

If in uterine spontaneous abortion the betas decrease slowly, in this case a rather sharp drop in values ​​can occur, even if there have been cases in which this did not happen.

The complete diagnosis is made only through transvaginal ultrasound and the picture in front of us is more or less the following: empty uterus, no gestational chamber or any blood clot that is about to be expelled. At this point the gynecologist will go to check the tubes and will be faced with two conditions: either the tube is intact but the egg surrounded by layers of coagulated blood is visible, or the tube is broken and therefore nothing is seen inside of the "tube" but a collection of fluid (blood) can be felt in the abdominal cavity. At this point, without any particular insecurity, we proceed with the diagnosis of tubal abortion and we will decide how to proceed.

A little parenthesis deserves the question of pain, or rather, pain as a sign of tubal abortion. In addition to what has been said about the reflected pain in the shoulder after an abortion, some studies have shown that in reality the women noticed the abortion a few days before the diagnosis. How did they do it? They heard one very powerful stab in the side, in the ovary area, a single twinge and then nothing more. Honestly, this type of pain can be typical of countless conditions even external to pregnancy (for example an ovarian cyst that bursts, or a rather complex intestinal transit of a hard mass, etc.) and in any case there are not yet sufficiently large studies to include this sensation. among the painful symptoms exclusively linked to tubal abortion.

It is not easy to predict what the consequences may be, even if mainly if the pregnancy goes far ahead of the average what happens is the rupture of the tube. In cases where this has not happened, it is possible to use a drug therapy based on methotrexate, a very powerful drug (also used as a contemporary or post-tumor therapy) which is very active on cells in great numerical growth such as embryonic ones. Being a very powerful drug, however, it is necessary to carefully evaluate the cases in which it can be administered, and this must be done by an expert doctor. The rupture of the tube with consequent abdominal hemorrhage, on the other hand, requires surgery to remove not only the blood and residual material of the abortion, but also the removal of the tube itself.

The methods with which this intervention can be practiced are different, the most used today is the operative laparoscopy, that is, no cut is made on the abdomen but only small holes through which the tools to carry out the removal will enter (also given the reduced size of a tuba). It is certainly a less invasive method than the old abdominal cut, the fact remains that it is a full-fledged surgery. I would like to underline that the removal of the tuba does not absolutely preclude the fertility, first because the tubes in the female genital system are two and therefore the other eventually exists. And secondly because there are cases in which even in the absence of a tube the fertilized egg has implanted itself correctly in the uterus.

In the scientific literature, cases are described in which the reabsorption and destruction of the material deriving from tubal abortion occurs autonomously. Typically these are cases in which the abortion took place very early, even before the embryo was formed, when the body's immune defense mechanisms are able to intervene to destroy and reabsorb what is left. Waiting for a tubal abortion to reabsorb on its own is, however, rather dangerous, mostly because it is difficult to understand in which cases it will occur and in which it will not. And therefore the mother is exposed to the risk of rupture of the tube, which until now had not happened and the pharmacological route could be groped. So in conclusion, tubal abortion is an abortion like any other, but with more risks for maternal health.

All the more reason, therefore, it is necessary to be followed from the beginning of pregnancy by an obstetrician or gynecologist who will be able to assess whether there is a risk of tubal abortion, will be able to quantify it and decide how to operate promptly if this happens.

Audio Video Tubal abortion: how does it happen and what are the most frequent symptoms?
Tubal abortion, the painful tale of a mother ❯

add a comment of Tubal abortion: how does it happen and what are the most frequent symptoms?