Tubal abortion, the painful tale of a mother 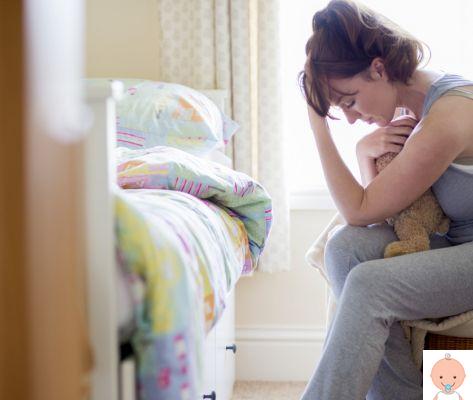 Tubal abortion, the story of a mother

My dream has always been to have a large family. This is why my husband and I have tried to have another child after our two girls aged 4 and 2. We didn't have to wait long and a couple of months after we started our research, the pregnancy test came back positive. I felt blessed and in seventh heaven: I already imagined what life for five would be like, how we would tell our eldest daughter, the joy of welcoming a new life into our home.


Added to this was the fact that one of my closest friends had announced that she too was expecting a baby: we could have faced the 9 months together and our children could have been playmates. Unfortunately, however, our happiness did not last long: the signals that my body sent me were different from those of the other two pregnancies. I was afraid, but I was trying to be positive: surely everything would be fine and my anxiety would be useless. Instead, when I lay down on the gynecologist's bed and did the usual ultrasound to hear the pulse, I heard myself say, without looking at myself: “There is nothing here”.

I remember staring at the ceiling and deep down inside me expecting it. A woman knows. But the bad news did not end there: “Unfortunately it seems that it is ectopic pregnancy, so you have to keep the right tuba monitored ”. In fact, I risked internal bleeding and to be operated on to remove it. “If you have even the slightest pain, go to the hospital straight away”; in the meantime I would have had to keep an eye on the betas to see their progress: if they had dropped, it would have been a good sign. I had a thousand questions in mind: why me? Why had my body betrayed me? Why did I have to go through another pain? After the birth of my daughter Paola I in fact suffered from postpartum depression and I thought I was largely in credit with the suffering. Instead I was again grappling with something bigger than me and incomprehensible.

The next day I had severe pain and I ran to the hospital: "Tubal abortion, we hospitalize her ”- said the gynecologist. The saddest thing was having to wait for the news of an abortion sitting in a waiting room with other pregnant women, happy and beaming with their bellies. They carried life within them, I felt like a tomb. Luckily the beta were going down and so at least there was some good news: it's really weird how a woman who discovers she is pregnant hopes their value will increase, while I just had to wish it was not. Fortunately, my condition has resolved quite well from a physical point of view: I expelled everything by myself as if it were a heavy menstruation.


In the hospital then I met many fantastic women who were in the same situation as me: we supported each other all the time with our eyes, perhaps aware of a secret and powerful force that has allowed us not to let ourselves go to despair. It was not pleasant to be in the ward with women who had just given birth: I envied them a lot, I hated myself and I hated them because they were holding their baby while I had lost it, even though I was only 6 weeks old. If from a physical point of view I was fine, unfortunately the road to emotional recovery was long.

In the world - according to the periodic report of the US Guttmacher Institute and WHO, the World Health Organization - one in 4 pregnancies is terminated. One in 4 and no one to say anything. We are ashamed to talk about perinatal bereavement, because as always - and I learned this by also working professionally as a journalist for postpartum depression - motherhood is understood only in positive terms, starting from a perfect and problem-free pregnancy.

A pain that has no dignity

The pain of those who lose a child, regardless of the stage of gestation, it has no dignity. "You already have two daughters, what are you complaining about?", "You can always have another one", "Basically you were only at the beginning, better it happened immediately rather than later". Ah yes, much better, you ugly head of cabbage. Sometimes I had the feeling of having dreamed of my baby (for me he was and will remain my baby) because in the thoughts and words of those around me he never existed. For my husband and I alone it was a loss to mourn and honor. Just in those days I read about an American writer, Ariel Levy, who had published a book called "The Rules do Not Apply": the rules that the body did not put into practice were those of having continued the pregnancy.

Ariel was also pregnant and had an abortion in the fifth month, giving birth to her son in the bathroom of a hotel room where she was on business. The writer says she took a photo of her son before the doctors arrived: only in this way was she certain that he really existed, because not being a living presence in the everyday life of others, it was as if his existence in the making could be canceled with a stretch of rubber.

Here, I felt this way for some time: if I hadn't kept the pregnancy test, I probably would have wondered what dimension I was in, that of truth or that of imagination. And that was when I thought about the “Flying Bed”, The framework in which Frida Kahlo cried out all her pain for having aborted the child she was expecting from Diego Rivera. She was perhaps one of the few women who had the courage to speak of the unspeakable by showing the ugly, in the midst of the many paintings of Madonnas who over the centuries have wanted to show only the poetry of motherhood. She especially she has one merit: that of not having wanted to forget. I don't want to do it: our family will always be part of that little life that we couldn't get to know because it left too soon. And if no one seems to be aware of it, we'll keep it in mind in our hearts.

Audio Video Tubal abortion, the painful tale of a mother
Folic acid, what it is used for and its benefits in pregnancy ❯

add a comment of Tubal abortion, the painful tale of a mother