Ultrascreen in pregnancy: a combined examination 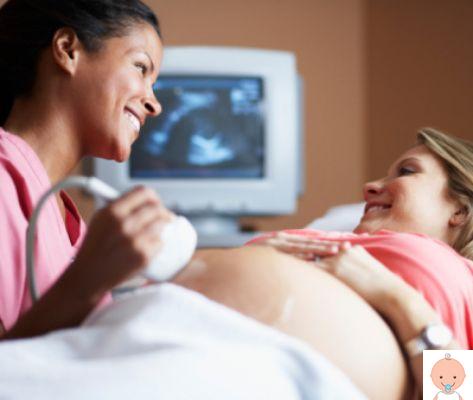 ULTRASCREEN - With a blood sample and an ultrasound, carried out between the ninth and fourteenth week of gestation, it is possible to find out if the fetus is affected by chromosomal abnormalities, in particular by Trisomy 21, or Down's Syndrome. We are talking about the bi-test and fetal nuchal translucency, which together give rise to the ultrascreen.

Ultrascreen is a method non-invasive screened (which does not diagnose but hypothesizes) able to detect the presence of defects of the chromosome kit of the fetus, based on the results of the bi-test, a blood chemistry test and measurement of the fetal nuchal translucency or an ultrasound; although it is a rather reliable technique, however, many experts and pregnant couples prefer to rely directly on targeted invasive tests to study the chromosomal makeup of the fetus. Studies have also confirmed that the combination of these two tests allows for an increasingly accurate analysis and a decrease in the percentage of false positives

How does it work and how is it done?
Through the bi-test, a venous blood sample that is carried out on the pregnant woman, it is possible to monitor the Free betaHCG hormone and the PAPP-A protein, both substances produced by the placenta and which are contained in the maternal blood sample and which, depending on whether or not chromosomal dysfunctions in the fetus are present, they change in quantity, increasing (the Free betaHCG) and decreasing (PAPP-A).

Read also: Prenatal diagnosis, how and who performs it

Through the ultrasound of the nuchal translucency, on the other hand, the quantity of liquid present in the nape of the fetus is measured and if it exceeds 2.5 / 2.mm in thickness it indicates an increased risk of chromosomal disease. Nuchal translucency is a temporary accumulation of fluid that forms in the retronucal part (nuchal fold) of the fetus's neck during the first weeks of gestation and which it must disappear by the 14th week of gestation.
The results of these two tests are evaluated and compared and based on the outcome the percentage of risk that chromosomal anomalies are present is estimated and in 90% of cases it allows to highlight the anomaly.
To carry out this test you have a 4 week margin: the bi-test is performed between the 9th and 13th week while the ultrasound is performed between the 11th and 14th week.

Who performs them?
While the bi-test is performed in a normal examination room, for the ultrasound you must go to a specialized center and the ultrasound must be performed by a qualified specialist with a suitable device.

What do they allow to see?
Through the ultrascreen it is possible to evaluate the percentage of risk that the fetus has a chromosomal abnormality and the most sought after are Trisomies 13,18,21. It is also possible to trace some pathologies and malformations such as heart disease, etc. If an increased risk of chromosomal abnormalities is detected from the ultrascreen, it is recommended to intervene with other more specific tests that allow a precise early diagnosis.

A child is removed from his mother at the behest of the Juvenile Court. What are the rights and duties of a parent? ❯

add a comment of Ultrascreen in pregnancy: a combined examination