Ultrasounds to be done during pregnancy month by month 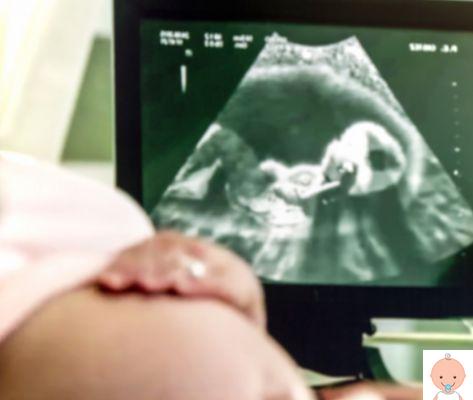 Ultrasound is one of the most important tests to do during the nine months of gestation and allows you to date the pregnancy, understand if the fetus is growing as it should, if there are abnormalities in the placenta and amniotic fluid, but also allow you to discover the sex of the baby and its position in the uterus. But what are the month by month ultrasound scans to do during pregnancy and how to program them?

First, how is the ultrasound performed? The woman is made to lie on her stomach and only her abdomen is uncovered. The examination is carried out thanks to a trans-abdominal probe which, placed on the belly in correspondence with the uterus, allows you to view the fetus inside. In special cases (for example when the pregnancy is in the very first weeks), it may be necessary to do an internal trans-vaginal ultrasound. The woman is then placed in the gynecological position and the probe is inserted into the vagina.

L'ultrasound in pregnancy does not hurt: it is an exam painless for the mother and free from side effects for the child which allows the doctor to perform more accurate and precise prenatal investigations.

Le ultrasound scans to do during pregnancy are included in the indispensable tests to be carried out and, in number of three:, are "offered" by the National Health Service, that is, they are not paid if they are done in public facilities with the request of your doctor. There are therefore three that the National Health System (SSN) guarantees in this period: one within the first quarter, a second, the "morphological" one, between the 20th-22nd week and one, between the 30th / 32nd week, for the evaluation of fetal growth.

Il calendar, therefore, it will be structured as follows:

Let's see in more detail what the ultrasound performed in the different weeks is for.

Ultrasound in pregnancy at 2 weeks

Generally you have to wait for the first ones six to eight weeks to schedule the first ultrasound. While theembryo it nestles inside the egg and the little heart is formed and begins to beat a few weeks must pass from the moment of conception. It is therefore useless to make aultrasound at 2 weeks because you would see nothing but a gestational chamber in formation, while the first ultrasound is mainly used to date the pregnancy, to verify that there is a heartbeat and that the embryo is well implanted.

Ultrasound in pregnancy at 4 weeks

Again it is definitely too early to do an ultrasound because you would see little or nothing. The operator carrying out the examination must be able to see the embryo to measure it and be able to date the pregnancy, in order to understand when it was conceived and how it was implanted in the uterus.

Ultrasound in pregnancy at 6 weeks

When you get around the sixth-seventh week of pregnancy you are already more likely to be able to see the beat of the baby, the embryo, the yolk sac and the gestational chamber. In some cases, future parents will be able to hear their baby's heartbeat. However to make sure you can really see something and to ensure that the first ultrasound, which is a very important test in order to understand if the pregnancy has started well, it can really be useful it would be advisable to wait at least until the eighth week before doing it.

This is certainly the deadline for having the first ultrasound scan which must be carried out by the end of first quarter.

Within 12th week of pregnancy there are already the sketches of all the organs and the various parts of the body of the unborn child. During this ultrasound, we check if the pregnancy is single or twin, the regularity of the fetal heartbeat, and some measurements of the baby in formation are made.

In couples who wish it, thanks to ultrasound, a further non-invasive control can be carried out for some chromosomal pathologies, mainly for Down syndrome, thanks to the evaluation of nuchal translucency. It is a fold of fat that is located behind the baby's head, in the region of the nape, in fact, between the spine and the skin, whose thickness is measured. The correlation between this and other parameters, mainly age, makes it possible to calculate a risk index, with a certainty of about 80%, on the basis of which it is decided whether to resort toamniocentesis, an invasive test that offers, however, the almost absolute certainty of the result in terms of chromosomal anomaly. When the thickness of the fold is greater than two millimeters there is a suspicion of trisomy 21 (Down) or trisomy 18. In order to increase the sensitivity of this prenatal investigation, a further examination called bi-test or dual-test can be performed. , the result of which, combined with the values ​​obtained with nuchal translucency, leads to a "sensitivity" of 90%: that is, it detects 9 out of 10 fetuses affected by Down syndrome or trisomy 18.

THEfirst trimester ultrasound it may also be required to accurately date the pregnancy. This can be difficult in women who do not have regular cycles, in fact there are tables with reference values ​​that allow you to establish, based on the length of the embryo and other measurements, the right age.

Ultrasound in the second trimester

THEultrasound of the 20th week or thereabouts, called morphological, provides numerous information: assessing the presence of the heartbeat and fetal active movements, which represent signs of the baby's well-being. It is also observed the placenta, as there can be problems, for example, for its position: if it is previous, that is placed anteriorly in front of the uterine orifice, it can constitute a reason for particular attention and possibly a counter-indication for natural birth, and can cause bleeding in pregnancy. They also check the amount of amniotic fluid, another index of fetal well-being, the breech or cephalic position of the baby, even if this will be more important at the 30th week.

They then take the "measures”Of the baby, evaluating the head circumference and its diameter (biparietal diameter), the abdominal circumference, the length of the femur, and the size of the cerebellum. The control of the heart and large blood vessels also makes it possible to diagnose any cardiac malformations. The vertebral column is also studied to exclude the presence of spina bifida, and the presence of the limbs and their normal development are observed. The morphological ultrasound also allows to visualize the presence of problems in the brain and the presence of all the organs that can be seen in ultrasound (for example the stomach or "gastric bubble", the kidneys and the bladder). Furthermore, at the 20th week, it is possible to highlight the sex of the unborn child, provided that this is in a position that allows observation.

Ultrasound in the third trimester

In 'ultrasound of the 30th week approximately, in addition to being re-evaluated the child's morphology, above all, his growth is checked. To this end, the parameters relating to individual babies are compared to reference growth curves, which allow us to evaluate their development with respect to the average values ​​(percentile): to say, for example, that the fetus is in the 25th percentile, means that it is smaller than 75% of his peers. Another purpose of this ultrasound is to see if the baby is with his feet down (breech position), in which case a further one will have to be planned close to the birth.

This will allow you to check whether the unborn child has turned or not and to evaluate, in this case, the need for a Caesarean section. Last but not least, the control of the amniotic fluid whose alterations can lead to suspicion of problems for the course of pregnancy.

As we said, the National Health Service offers three free ultrasound scans to all pregnant women, to be performed one for each quarter, and also offers morphological ultrasound, a strictly important exam that takes place around the 21st week that is used to measure the length of the various organs and limbs and evaluate any malformations. If you intend to do the ultrasound scans in a hospital or public center, book all the exams well in advance because the waiting lists can be quite long.

After having done the 1st ultrasound, the doctor will recommend to plan and book also the ultrasounds of the II (morphological) and III trimester (which is used to control the growth of the child).

If you book an ultrasound in a private center the cost per exam can vary from 50 to 100 euro, while the morphological ultrasound, which is very important and more detailed, can cost too much 150 €. The report is delivered immediately along with some ultrasound images.