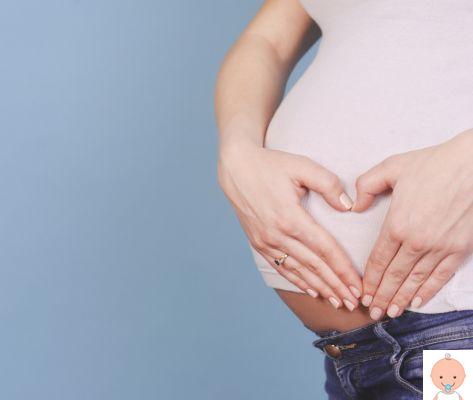 Urinary incontinence in pregnancy is a rather frequent and annoying disorder that affects many expectant mothers especially during the last weeks before the baby is born. It takes very little, for example a cough or a laugh, to experience the embarrassing loss of a few drops of urine.

Urinary incontinence is the involuntary loss of urine. It may be due to physiological factors, such as the weight of the uterus volume during gestation, or related to other factors, such as urinary tract infections, cystitis etc. It affects women most and there is no predefined age, as the disorder can manifest itself at an advanced age or after the age of sixty, such as at twenty or thirty.


This disorder affects about the 10% of pregnant women, mostly affecting women who have already had children; in women who are already mothers, however, it may happen that small leaks of urine occur as early as the first trimester in spite of the first trimester where the disorder usually occurs in the third trimester due to the enlargement of the uterus that houses the baby and exerts pressure on the bladder .

If incontinence occurs only during the last period of pregnancy, do not worry, it generally resolves on its own after delivery.

The cause of this discomfort is therefore to be traced back to a purely mechanical factor that will resolve itself after giving birth by training the pelvic floor musculature and also to a hormonal factor because the effect of progesterone, produced in large quantities by the placenta, acts as a muscle relaxant which also acts on the pelvic floor muscles and prevents perfect control of the urge to pee.

The risk of incurring discomfort related to urinary incontinence during the nine months of gestation will therefore be more frequent in women who have already given birth since the muscles are already tested by the previous or previous pregnancies, therefore they do not respond with great elasticity and tolerate minus the pressure of the uterus pushing on the bladder.

However, once the disorder manifests itself, it is possible to try to mitigate it with particular gymnastics: through simple daily exercises it is possible to restore tone and elasticity to the structures tested.

How to alleviate incontinence with gymnastics

The most usual exercise is this: while urinating the expectant mother should block the urinary flow for a few seconds and then release it, repeating the exercise a few times during the urination itself and also throughout the day.

How to use the famous Kegel exercises to strengthen the vaginal muscles and the perineum in preparation for and after childbirth, but also to have better sex

Other useful exercises can be:

Absolutely wrong to think that drinking too little water can help to counteract or reduce urinary losses! The future mother must drink lots of liquids, especially water, to allow the body to purify itself and eliminate waste through the urine itself.

If the incontinence continues even after delivery

One way to prevent urinary incontinence disorders after childbirth is to prevent the baby from staying for a long time during the expulsive phase by pressing on the pelvic floor and that it does not cause lacerations by going out.

Precisely in this regard, many gynecologists and obstetricians, during childbirth, routinely use the practice of episiotomy, or the transverse cut that is made between the vagina and the anus immediately before the baby sees the light, through this practice in fact , it prevents the tissues from lacerating affecting even the deeper layers and ensuring faster healing and that in fact, decreases the probability of any urinary and fecal incontinence after childbirth.

If after giving birth the problem does not go away, after one sort of gynecological examination to assess the degree of incontinence, the specialist can recommend the gymnastics already mentioned above for the pelvic floor or real ones drug therapies which help contract the eurythral sphincter and thus inhibit urine loss.

Even some lifestyle variations however, they can help reduce or eliminate discomfort, for example:

Urinary incontinence in pregnancy and after childbirth ❯