Urinary incontinence in pregnancy and after childbirth 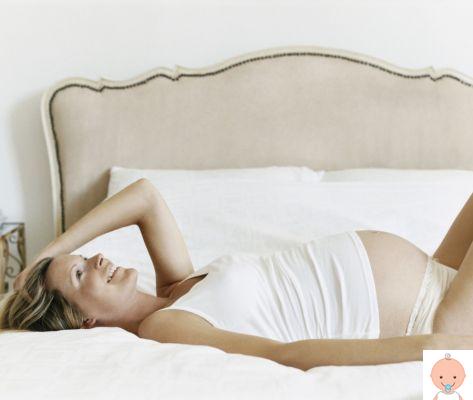 Who has never lost a drop of urine, especially during pregnancy or after childbirth? Let's start defining what isurinary incontinence: an involuntary loss of urine that can occur in various situations such as after a cough or intense exertion (stress incontinence) or you have so much need to go to the bathroom that you can't help yourself (urge incontinence).

Whatever the origin or the amount lost it remains a very annoying and also very common problem.


What are the reasons why urine is lost during pregnancy? Which ones, on the other hand, after childbirth?

As the pregnancy progresses the volume of the uterus grows with the baby, and being the uterus and bladder very close, part of it rests directly on the bladder, squeezing it. This squeezing together with the normal laxity (ie ease of yielding) of the tissues in pregnancy, can cause the release of a few drops of urine if the bladder is full.

In the postpartum, however, the main reason is stretching of nerve fibers. Let me explain better, while passing through the birth canal the baby stretches the muscle fibers of the cervix and vaginal wall. These walls are closely connected to the walls of the urethra and are rich in nerve endings responsible for the signals sent to the brain about the state of the bladder. The stretching causes a momentary numbness of the nerve fibers that no longer communicate properly, and therefore when the bladder is full they could also cause small losses of urine.


Is it possible to prevent the disorder and how?

There are several exercises that can be done to try to improve the muscle tone responsible for the final release of urine drops, but before these I want to underline the first fundamental rule, valid for pregnancy and after childbirth but also for life: do not hold urine. In fact, the more the bladder fills, the more its walls stretch, recreating the same situation as the uterus which compresses the nerve fibers. In addition, a full bladder will not be able to take more urine from the kidneys until it is emptied and therefore the chances of leaking increase.

How to use the famous Kegel exercises to strengthen the vaginal muscles and the perineum in preparation for and after childbirth, but also to have better sex

Let's now move on to the exercises, they can be performed both during pregnancy and after childbirth.

Important when you perform the exercises with breathing and then those with movement, it is do not force the rhythm of your breath or hold your breath. This is because if you hold your breath or on the contrary take too short breaths, not only does the blood not oxygenate and therefore you risk dizziness, but also the pressure inside the body increases in one case and decreases in the other, reflecting on the system. tightness of the pelvic floor muscles.

As you can see, there are four simple exercises you can all do. Tonic muscles in the pelvic floor during the period of maximum relaxation and use such as pregnancy and childbirth, mean health and reduced risk (even after several years) of running into embarrassing problems.

Nightmares of babies and children: how to deal with them ❯

add a comment of Urinary incontinence in pregnancy and after childbirth