Uterus: how it changes in pregnancy 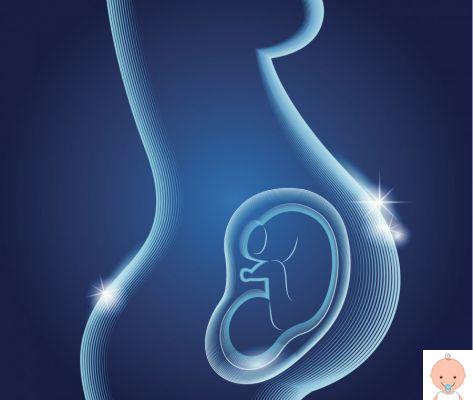 How the uterus changes in pregnancy

The uterus is a very important organ in pregnancy because it has the function of welcoming the embryo and thus initiating gestation; it is here that the embryo nestles and develops until delivery.
It is located in the middle of the body (although it can be slightly tilted to the right or left) and is largely enveloped by the peritoneum.

Read also: The female perineum, what it is and why it is important to train it

We can distinguish two parts in the uterus: a muscle wall called myometrium and an internal cavity, the endometrium in which particular, defined movements take place peristaltic, which vary during the phases of the cycle. Normally the uterus is tilted up and forward towards the vagina, but in about 20% of cases it is tilted down and back and is located near the rectum.
In this case we speak of a retroverted uterus.

From the anatomical point of view, a rounded upper portion is distinguished where there is the entrance to the tubes, a main portion (body), a short passage segment (isthmus) and a neck. A part of the neck protrudes into the vagina and presents the external orifice of the organ.

The cervix, also called "uterine mouth", it plays a passive but fundamental role during gestation: it provides mechanical support for the product of conception. It is a narrow fibro-muscular canal that connects the body of the uterus to the vagina.

Throughout the period of pregnancy, under normal conditions, it remains firmly closed to prevent premature birth, and to prevent any infectious agents from reaching the fetus.
During the first hours of labor the cervix it flattens and expands to form a canal continuous through which the fetus will pass. The dilation of the uterine mouth coincides with the dilating period of childbirth.

The uterus, in pregnancy, more than any other organ, is the subject of profound changes: initially it is about 8 centimeters long while at the end of pregnancy it reaches dimensions that correspond to an increase in the volume of its cavity 500-1000 times. In fact, it reaches a length of 35 centimeters and a depth of 20.

Not only that: in normal conditions it weighs about 50-80 g but with pregnancy it develops until it weighs heavily even 1-1,5 kg. This increase is due to several factors including the water retention that occurs in its tissues, the increase in the caliber of blood and lymphatic vessels and the formation of new bundles of fibers.
But the processes of hyperplasia and hypertrophy of the muscle fibers also occur for which there is an increase in the number and volume of the affected cells respectively.

It must also be said that the inside of the uterus, in addition to the fetus, it also hosts the placenta and the ovular adnexa, which are the structures of the egg that are not part of the fetal body. Since the uterus has to bear a weight of more than 5 kg in late pregnancy, it is fixed with strong connective connections. Following numerous births or in old age the ligament tension loosens and the uterus descends downward.
But let's see how the egg behaves when it reaches the uterus. After 5 days from fertilization the embryo arrives in the uterus but this is still not enough for the pregnancy to begin, in fact if the fertilization has not occurred the egg is expelled through the menstrual blood. Otherwise, if the ovum is recognized as qualitatively adequate to continue its growth, the corpus luteum, that is what remains of the follicle once fertilization has taken place, begins to produce hormonal substances that modify the walls of the endometrium making it suitable to accommodate the embryo.


THEnesting of the latter to the endometrium occurs thanks to special molecules called "adhesion" but also through a series of particular biochemical mechanisms. Once the embryo arrives in the uterus it must "Overcome" the strict selection criteria; in fact, only the genetically and chromosomally adequate embryos will nest in the appropriate way and continue their growth, while most of the unsuitable ones will be eliminated.

The uterus in early pregnancy

During the first weeks of pregnancy, estrogens influence the hypertrophy and hyperplasia of the myometrium while after the 10th-12th week of gestation it is above all the growth of the fetus and placenta that contributes decisively to the increase in the volume of the uterus. Another transformation is that of the uterine walls: while in normal conditions these have a thickness greater than 2 - 3 centimeters, as pregnancy progresses they gradually thin up to a thickness of 10 millimeters.

The consistency of the body and the cervix is ​​pasty. The glands of the canal secrete a greater amount of mucus which serves for the mucous plug; the latter has the task of isolating and protecting the uterine cavity where the fetus develops

Holiday in Europe with the little ones? Here's where to go ❯

add a comment of Uterus: how it changes in pregnancy