Valentine's Day: the protector of children 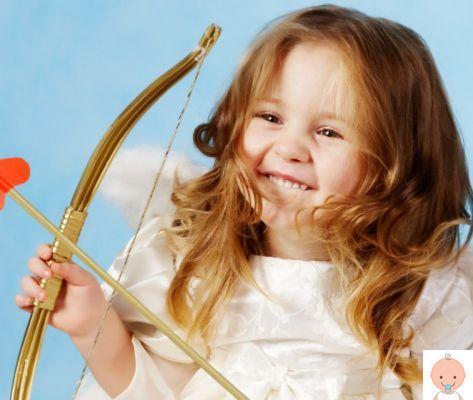 Valentine's Day is the feast of lovers, but few know that it is also the feast of children. Valentino was born in Terni to a patrician family in 176, he converted to Christianity and was consecrated bishop of Terni in 197. He died on February 14, 273 AD His skull is thought to be kept in a glass case in the Basilica of Santa Maria in Cosmedin in the city. In fact, the skull is adorned with red roses and is an important relic, exhibited to the faithful every 14 February.

In Terni, where Valentino is patron saint, the Feast of Promise is celebrated every 14 February, which is attended by young people who are about to get married and couples who have been married for years to exchange a vow of love in the Basilica dedicated to the saint, where his spoils.

Read also: The Valentine's Day to tell the children

Who is Valentine's Day

February is the month of rebirth, when winter comes to an end and the earth begins to awaken. There are several legends that tell the story of Valentine's Day.

According to a legend, Valentino was a priest who lived in the city during the third century. At that time, Emperor Claudius II decided that war was not suitable for those who were married and that single people were better suited to war because they had no ties. So he decided to abolish marriage and engagements for boys of draft age. Valentino, a combative Christian priest, did not agree and so he opposed and celebrated one, precisely on February 14th. The emperor discovered him and sentenced him to death.

According to another legend, it seems that Valentino was killed for trying to help Christians escape from Roman prisons, where they were beaten and tortured. Still another tells that Valentino was imprisoned and fell in love with the daughter of his jailer. He sent her a love note before being sentenced to death: "From your Valentine", an expression that is still used in cards all over the world.

The Catholic Church, around the fifth century, wanted to eliminate the pagan rite for fertility; the pagan Romans in fact paid homage to the god Lupercus. The women and men put their names in an urn which were mixed up and then picked up at random by a child. The chosen couples would live together for a year to perform the fertility rite. The Church decided to eliminate this rite and found a bishop who had been martyred on February 14: Valentine. Thus it was that the bishop Valentino was chosen by the Church to replace the pagan god Lupercus.

But who was the first to produce the love cards?

The oldest "valentina" of which traces have remained dates back to the 1415th century and was written by Charles d'Orléans when he was detained in the Tower of London after the defeat at the Battle of Agincourt in 800. Charles wrote to his wife Bonne di Armagnac with the words: "I am already sick of love, my sweetest Valentina". Valentine's Day became a business in the late 14s in the United States, where entrepreneurs such as businesswoman Esther Howland began producing Valentine's Day cards on an industrial scale. The Greeting Card Association estimates that around one billion greeting cards are sent out on February XNUMX each year, making it second in the number of cards bought and shipped after Christmas.

But there is a legend dedicated to children and which also makes Valentine's Day their protector.
Valentino had a large garden full of beautiful flowers where all the children could play freely. He often looked out of his window to check and was happy to see them play. When evening came, he would go down into the garden and all the children surrounded him with affection and joy. Before sending them home, he gave them the blessing and gave each one a flower recommending that they take it to their mothers: in this way he was sure that they would return home immediately and that they would love and respect their parents more and more. From this legend derives the custom of giving small gifts to people you love.

Will it be male or female? Here are more than 30 ways to know ❯

add a comment of Valentine's Day: the protector of children