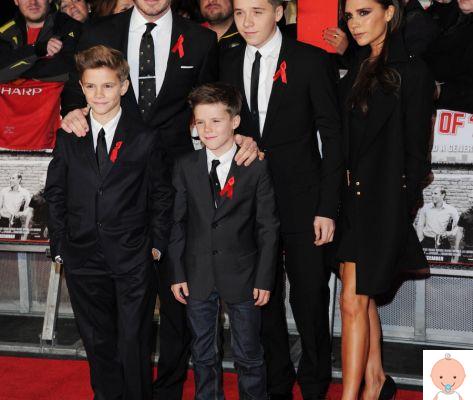 The women of the planet envy her badly: the ex Posh Spice has not only grabbed one of the sexiest men in the world, David Beckham, but he did four children, and he won't let go. But how do you juggle husband, offspring and work? Here is a career mom DOC!

Throughout her pregnancies - well four - Victoria has always been very attentive to the balance. Too much. During the last sweet wait, in 2022, the star was often criticized for being too thin and skeletal despite her baby bump. At the time, the Daily Mail wrote that after 5 days of giving birth, the former Spice Girl had embarked on a strict diet to dispose of the few pounds put into pregnancy. Plus, taking planes galore during all pregnancies and hopping around the world from one event to another, she has been accused of putting her fast-paced and ultra-glamorous lifestyle ahead of her care. healthy and serene motherhood.

Revolutionize the wardrobe with maternity clothes and comfortable shoes? Not at all. Mrs. Beckham during all of her pregnancies has never given up on impeccable outfits and ultra stylish; she has in fact continued to wear stretch and mini dresses (dresses, leggings, shorts) and above all always put on heels 12 even in the last months of pregnancy. In the name of fashion, even the comfort and above all the safety of children has taken a back seat ...

While the beautiful dad David appears more relaxed in educating the numerous offspring, mother Victoria it seems to be more rigid. According to a source close to the Beckhams For the former pop star and fashion designer, watching her children grow up is both beautiful and painful at the same time. Apparently she cares a lot and always wants to have control over them. In any case, despite being rich with fear, both Vic and the former footballer agree in wanting to raise their children in total humility and without spoiling them (so much so that the eldest Brooklyn works as a waiter in London on weekends for three pounds an hour. Praise praise praise to the parents who encouraged him towards a normal job, at least while it lasts).

Victoria admitted that spending a lot of time on her lwork of stylist it always makes her feel guilty about her children. Like any career mom, Beckham he always said to go out of his way to be able to reconcile work commitments and children. "I wake up early in the morning to do spelling and math homework with them and then stay up late with Brooklyn never wanting to go to bed," she said. The ex Spice also claimed to have a life organized to the thousandth to carry on all aspects of her hectic existence of her (admitting, however, that she also has a team that helps her). But his children always come first. And thank goodness.

"I'm tired", said Mrs. Beckham during an interview a few months after the birth of the last child Harper. Poshy explained that, between business phone calls and up early hours, by now staying up in the wee hours had become a household habit rather than a social life: ”Harper doesn't sleep much and I stay awake at night like all mothers in the world ”. In short, juggling red carpet, diapers and work is a grind even for one of her like her. Could it be for this reason that he practically never laughs?

Read also: Victoria Beckham: "I am a mother who works with a sleepless child"

It seems that Victoria Beckham he has never read a book in his life. She confessed to it herself, explaining that her life as her famous mum doesn't allow her to venture into anything more intriguing than fashion and music magazines. Mmmmmmm ... here motherhood smells like sorry ...

Another stork on the way?

In 2022, during the London Olympics, many rumors wanted Posh Spice expecting the fifth stork. But the rumors were later denied by the same. The Beckhams, however, have never discarded, after the birth of Harper, to further enlarge the already large family. Maybe…

The other famous mothers

Zika virus: focus on Doctor's Life and then Sky ❯

add a comment of Victoria Beckham: identikit of a career mom