Vitamin D deficiency in pregnancy: everything you need to know 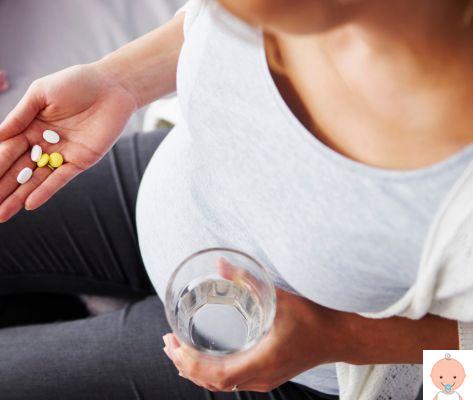 Vitamin D deficiency in pregnancy: what to do

La vitamin D it is a great ally of women during pregnancy and breastfeeding. There are many experts who - in specific cases - recommend a daily intake to ensure the health of the mother and the fetus.

Vitamin D, in fact, is necessary for the absorption of calcium, for the bone formation, for the mineralization of the skeleton of the fetus.

During pregnancy there can be a decrease in vitamin D and, if not kept under control, it can lead to an alteration of the process of formation of the fetal skeleton and also have consequences on the maternal skeleton. Not only that, according to some studies, it would seem that an important deficiency of vitamin D can also cause preeclampsia, preterm birth, stunting and increase the risk of developing chronic diseases of the immune and respiratory systems.

But let's go in order, trying to understand better what is vitamin D, when a pregnant woman may have too low and what to do in these cases.

The importance of Vitamin D

La vitamin D it is very important in pregnancy and beyond.

Vitamin D is essential for the absorption of bones and, therefore, in the event of pregnancy, for the formation of the baby's bones. Some studies suggest that a vitamin D deficiency during pregnancy could affect bone formation not only in the fetus, but also later in life, as the baby grows and develops.

That's not all: a lack of this vitamin in 9 months could also have consequences on the baby's teeth.

Le food sources which contain the Vitamin D they are egg yolk, some fatty fish such as salmon and mackerel and fatty cheeses. These foods should be consumed sparingly, following a precise food plan which, usually, it is the gynecologist who indicates to the pregnant woman in case of vitamin D deficiency.

Alternatively, vitamin D can be taken through supplements that can be purchased at the pharmacy. But, even in this case, it is essential not to do your own thing and follow the advice of the specialist.

We mentioned it earlier, but let's try to better understand what they are the risks of vitamin D deficiency in a pregnant or breastfeeding woman.

Un vitamin D deficiency in pregnancy it could affect both maternal and fetal skeletons. The first could undergo alterations, the second risks not forming properly.

Some studies have also associated vitamin D deficiency with delicate problems that can affect pregnant women. We speak, specifically, of preeclampsia, also called managers, of preterm birth, of arrest of growth and therefore of infants younger than their gestational age.

Not only that: the lack of vitamin D favors the appearance of respiratory diseases and increases the risk of bronchial and lung infections. According to some medical research, the consequences of vitamin D deficiency in pregnancy could also manifest themselves after childbirth and after several years of the child's life, in the form of neorocognitive disorders, eating disorders in the years of development (from 6 to 10 years mainly and up to when peak bone mass is reached).

There is no reliable data on this, but according to some theses, vitamin D deficiency could also cause a miscarriage in the first trimester, or stillbirth in the second and third trimester.

Vitamin D, in fact, would represent a fundamental role in the correct formation of the placenta in the early stages of pregnancy.

Vitamin D deficiency: which women suffer from it?

Not all women undergo one screening of vitamin D values ​​in pregnancy, but there are "at risk" categories that need to be kept under control.

Some people, more than others, in fact, are at risk of developing one deficiency of this vitamin. This is the case, for example, of people with high skin pigmentation, people who have little exposure to the sun, people who are obese or who take drugs that could somehow interfere with the metabolism of vitamin D.

In addition, very young mothers (in the adolescent period), those who have an increased risk of preeeclampsia and those who have had a child previously suffering from rickets may also be prone to vitamin D deficiency.

Not all women, therefore, must take supplements or foods based on vitamin D or perform specific checks on this vitamin, but the gynecologist will identify the "at risk" cases.

add a comment of Vitamin D deficiency in pregnancy: everything you need to know