Walking, what magic! How to stimulate the first steps 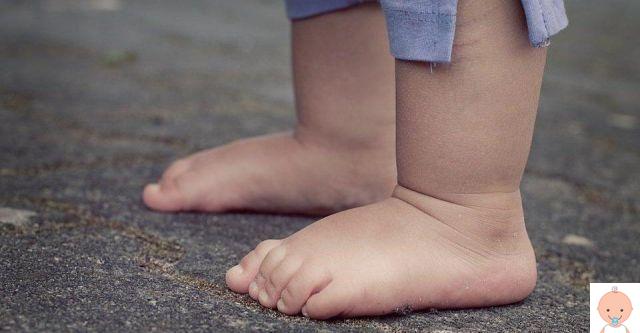 To walk it's a finish line to which, after a percorso natural, all come children; the only one diversity it concerns the timing: there are those who remain a "crawler”Very fast up to 14 months, whoever proceeds fearless out of two legs already at 10. But theemozione to see your own small in piedi and zompetta From one room to the other it is like this forte that often i Parents they care about delays non-existent.

By premising that every child grows so unique e staff, the stages of motor development represent indicazioni rather generic of the movements that the child should be to be able to do in a given time. To the third month of life, for example, the neonate start to keep the forehead erect; to the room succeeds, if put in belly in down, to pull su with forearms, Furthermore tripping and moves the arms; to the sixth month is put i feet in mouth and stretches the limbs superior; all’eighth sta sitting da alone, springs on legs and slowly learns a roll around.

A ten months, the baby is able to do some movements more complex, as Sit da alone passing by position supine to that sitting, to grab the objects that interest him e cling a vari holds to support themselves. From here to to crawl it's a blow: clinging in fact it succeeds in get on in piedi and move so autonomous although, a 11 months, someone is looking directly for themotor independence. from 12 ai 14 months almost all children start doing i first steps and within i 18 they go shipped in search di movements in full freedom.


È clear that if a child a 20 months not yet walking it is better to turn to one specialist. In principle, however, i Parents eager to see your own son at the head of home marathons must have patience: it is good not force the little one to do movements that do not come to him spontaneous. According to the pediatriciansIn fact, acceleration their motor skills does not give away any advantage. Likewise, different studies international underline theuselessness and danger of walker like stimulus-tool to walk (we had already talked about it HERE).


Instead, there are small ones tricks to give safety to children frightened from this new one opportunity di movement and for stimulate them a walk in a manner healthy.

In addition to attract him towards his own objects favorites (bottle, pacifier, toys) it's at reward him for the various attempts successful or not with caresses e kisses, you have to infuse it peacefulness with gestures calm e smiles continuous.

when the small begin at walk, the patience, in short, it must never come less. Also, at this stage of mere discovery, is preferable "stuffing"To casa and floors. First of all, a beautiful carpet soft for muffle i tonfi when the bimbo experience the position erect, it will make it less fearful in try again. Then, as for magic, the corners di furnishings e objects edgy must to disappear under the formula of paraspigoli, the drawers they must be blocked, the detergents move to high, And the electrical outlets closed with plaques to children.

Attention also to objects heavy, for example the television, what if positioned ad height baby it could be cause of unpleasant accidents; better create one distance di safety placing a table and thus preventing the little one walker I threw it away on.

It flies, i neo-walkers, and in any case i children up to two years of life, they need shoes be it flexible, of quality e comode, made with materials breathable better if high up to ankle in winter e closed is front that on heel in summer. Banned le thongs, flip flops, shoes to good market and USEFULL too great. Street frees it also ai piedi completely naked.

Audio Video Walking, what magic! How to stimulate the first steps
Breast candida, how to treat mom and baby ❯

add a comment of Walking, what magic! How to stimulate the first steps