Weight of newborns, how to understand if the baby is growing well 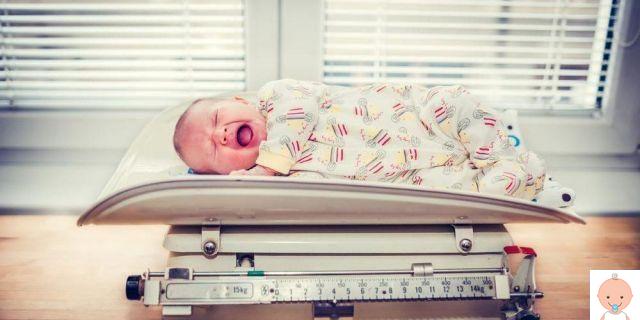 When dealing with a neonate and, in particular, if you are at the first experience with bundle, One of the questions more nagging for mothers and fathers it is: “But ours son will stand crescendo well?". Yes because between feedings, diapers, scales, curve di growth e percentiles il risk is ... not to understand each other nothing. It is true that the weight of the Infants (as well as theheight or, rather, the lunghezza) is a question subjective, but some idea in principle we can do it.

Each change weight it seems unleash un mess. And also i comparisons with children of the friends or delle sisters they would go avoided not to create concerns excessive. L'imperative categorical is remember that every child is different from the others and proceeds according to his own rhythm personal. it weight of the Infants e measures are import anti to evaluate the growth overall, i signals di welfare they go beyond USEFULL and scales.

In the former months the child grows to one speed incredible. A ten days after normal physiological decline, resumes the weight initial and begins to grow to a rhythm which varies a lot from child to child, but which is still a lot supported. In first quarterin fact, the weight of the Infants varies on average from 100 a 200 grams to the settimana. Then Slows e and stabilizes, between 4 and 6 months, around the 85-145 grams Weekly.


Generally, by i 6 months of life, the child doubles il weight that he had at the birth. In the same period lunghezza increases by approx 2 and a half centimeters al month (and this can be Useful when, during the pregnancy, you do shopping for the baby: don't buy too much stuff small, type 0 months, because they could stay in the drawer).

After turning off the first candle speed area of growth will be more slow and the proportions of body: physical will be more and more willowy, legs more long and forehead will almost stop to grow up. From second year onwards weight e height they will change less constant, almost "in fits and starts“: Periods of break and fast increases.

And speaking of increases, have you ever heard of "Scatti di growth“? It may happen that, once thenursing it's well started, suddenly the baby wants suck much more often than usual in the arc of 24 hours. This request "extraUsually occurs between the third and sixth week and then around the third month (even in this case, however, there is variability).

Don't think it is fault of your XNUMX cups milk which is not satiated enough. They are precisely the "Scatti di growth"That last a pair di giorni and that's fine indulge: attaching itself to the breast more often, the growing little one urges a production di XNUMX cups milk always appropriate to its augmented requirements.

We had already talked about how to understand if the child it eats enough in another post (you can read it HERE), but we summarize those who, in addition to the weight of the Infants, are the indicators di welfare. To make sure yours son receive XNUMX cups milk a enough it is good controllare that:

add a comment of Weight of newborns, how to understand if the baby is growing well