What are your chances of having twins? 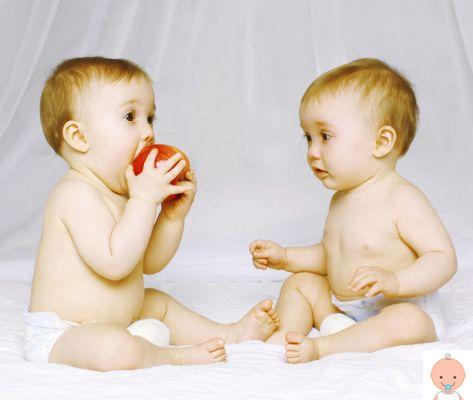 In twenty years the number of twin pregnancies has practically doubled, reaching 25% of all pregnancies.

Among the causes of this increase certainly maternal age, which is increasingly advanced (as we get older, hormonal changes make it more likely the release of more oocytes that can be fertilized), and the increasing use of assisted fertilization which in fact increases significantly. the odds of having twins.

What are the numbers of twin pregnancies?

THEincidence of a "spontaneous" twin pregnancy, ie without having recourse to hormonal treatments or assisted fertilization, is 1 in 80 births for twins, and 1 in 8.000 births for triplets, while for quadruplets births there is one case every 730.000 births.

In case of treatment for the fertility what are the chances of a twin pregnancy?

Undoubtedly one of the main factors that favor multiple pregnancy is the use of assisted fertilization techniques but a lot depends on the type of treatment.

Here are the most relevant data

What are the other factors that favor a twin pregnancy?

The pregnancy of homozygous twins (i.e. identical, born from a single egg fertilized by a single spermatozoon that has split into two parts, giving rise to two fetuses of the same sex) are pure chance, but there are some factors that can increase the chances of having twins heterozygous (two eggs conceived from two spermatozoa, therefore not identical).
Let's see what they are.

Read also: Curiosities about twins, from birth to growing two
Audio Video What are your chances of having twins?
Who are the diamond children and how to recognize them ❯

add a comment of What are your chances of having twins?