What to do if pregnancy cramps appear 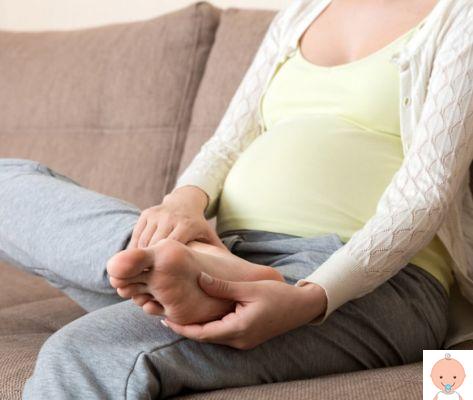 It may happen that, during pregnancy, some symptoms arise annoying crampsthe. Involuntary spasms that attack the lower abdomen or abdomen, but also other areas of the body (legs, feet, calves) causing acute pain, limiting the woman's movements and forcing her, most of the time, to lie down waiting for them to pass.

But why do they show up cramps during the 9 months of gestation? And what can be done to avoid them or make them pass quickly? In this guide we try to clarify a topic that affects most pregnant women:

Cramps in pregnancy in the lower abdomen

Especially in the first trimester of pregnancy it may happen that the woman is dealing with cramps in the lower abdomen. Stinging, "bites" that attack the ovary area causing a discomfort similar to that of the pre-menstrual phase and of the cycle.

This happens because the increased levels of estrogen and progesterone increase the blood supply to the pelvic area. Usually these are pains that need not worry, that as they arrive they go away. In case of excessively severe pain and blood loss, however, it is necessary to contact the gynecologist promptly because, at the beginning of a gestation, unfortunately, these could be symptoms of a miscarriage.

Cramps in the lower abdomen could also occur in the second trimester of pregnancy, however, these are often generated by the ligaments that, in support of the uterus, stretch in this phase.

Just lie down for a while, relax the area, and the cramps will pass.

The discomfort we mentioned earlier, however, can also affect the upper part of the belly, in this case we will talk about stomach cramps in pregnancy.

Other than lower abdominal pain, these are spasms that affect the area below the breastbone, occur suddenly and often also involve burning, acidity, digestive problems, reflux. What generates them?

The more the pregnancy goes on, the more pressure the uterus increases on the stomach, the more the woman may have to deal with this type of cramp. To counter them it is important to follow one Proper nutrition and, if the gynecologist deems it appropriate, also take magnesium and potassium supplements.

Not to be confused with stomach cramps, i abdominal cramps in pregnancy they can occur throughout the 9 months. Also in this case - unless other worrying symptoms appear - there is no reason to be alarmed.

Abdominal cramps are pains related to the installation of the fetus in the first quarter and to changes in the latter over the following months. Belly pain can recur in some stages, it can sometimes be a symptom of fatigue, swelling due to increasing hormones.

In the second trimester of pregnancy, abdominal cramps can be caused by the pain of the round ligament of the uterus. A cord whose function is to keep the uterus in its position, and to avoid deformations of its walls. Finally, in the third trimester, abdominal pains can be a sign of first contractions.

In any case, if the pains are persistent it is good to consult the gynecologist.

Belly pain in pregnancy, therefore, most of the time is physiological and should not cause alarm. It is important, however, that a woman, over the months, is able to recognize it, does not get upset and is able to understand what it can be generated from.

In the first month, for example, when the woman does not yet know she is pregnant, those very cramps in the lower abdomen could indicate a pregnancy. Going forward in gestation, mothers-to-be will not have to behave like super heroines, but be careful, and know how to stop and relax if pains in the lower abdomen, abdomen or stomach appear, just as indicated above.

An abdominal pain that is not physiological during pregnancy usually does not come on its own, but involves other ailments, such as blood loss, which then must make the woman suspicious and lead her to the emergency room.

Cramps in the first month

In the first month of pregnancy, as previously mentioned, cramps and tension in the lower abdomen are common and more than normal. Fertilization, in fact, takes place in the fallopian tube, from here the embryo takes a few days to reach the uterus and start making space.

The cramps that many women feel in this early stage of pregnancy are so-called "implantation cramps", easily confused with the pains that precede the arrival of menstruation.

This is precisely the reason why many women do not suspect they are pregnant until several days of delay in the menstrual cycle.

Cramps in the first trimester of pregnancy

In the first trimester of pregnancy, therefore, the cramps in the lower abdomen are generated by the implantation of the fetus and its growth of the uterus. They can also be caused by the increase in hormones which causes tension and swelling.

But the first trimester, all women know, is the most delicate, the one in which - unfortunately - severe pain with consequent blood loss - can be a sign of a miscarriage or problems affecting mother and baby. This is why it is important not to underestimate the discomfort that arise in this gestational phase and to consult the gynecologist for any doubts.

Cramps in pregnancy, what to do?

Cramps in pregnancy don't just affect the tummy, moms-to-be know this well. They can also be of interest calves, feet, thighs. Even those women who have never before suffered from involuntary spasms find themselves struggling with it. Because?

In addition to all the causes already listed above, cramps in pregnancy can be caused by electrolyte imbalances, From one reduced venous circulation. A woman during pregnancy may be low in minerals and may need to increase her intake of potassium, magnesium, sodium, calcium, phosphorus, either through food or in the form of supplements.

Furthermore, during pregnancy there is a natural slowdown in blood circulation, also due to weight gain, for this reason the gynecologist may advise the pregnant woman to wear graduated compression elastic stockings. Swimming, adequate physical activity, yoga can be of great help in improving circulation, and decreasing the appearance of cramps.

Cramps join other ailments that affect a woman during pregnancy. Pain, heaviness, back pain, tingling in the hands and feet, inflammation of the sciatic nerve, constipation, headache, hemorrhoids, nausea and vomiting especially in the first trimester.

A woman, for the great love of welcoming her child, will have to learn to live with these physiological disorders, not being afraid to ask, ask the gynecologist questions, slow down her daily life, take care of herself.

add a comment of What to do if pregnancy cramps appear